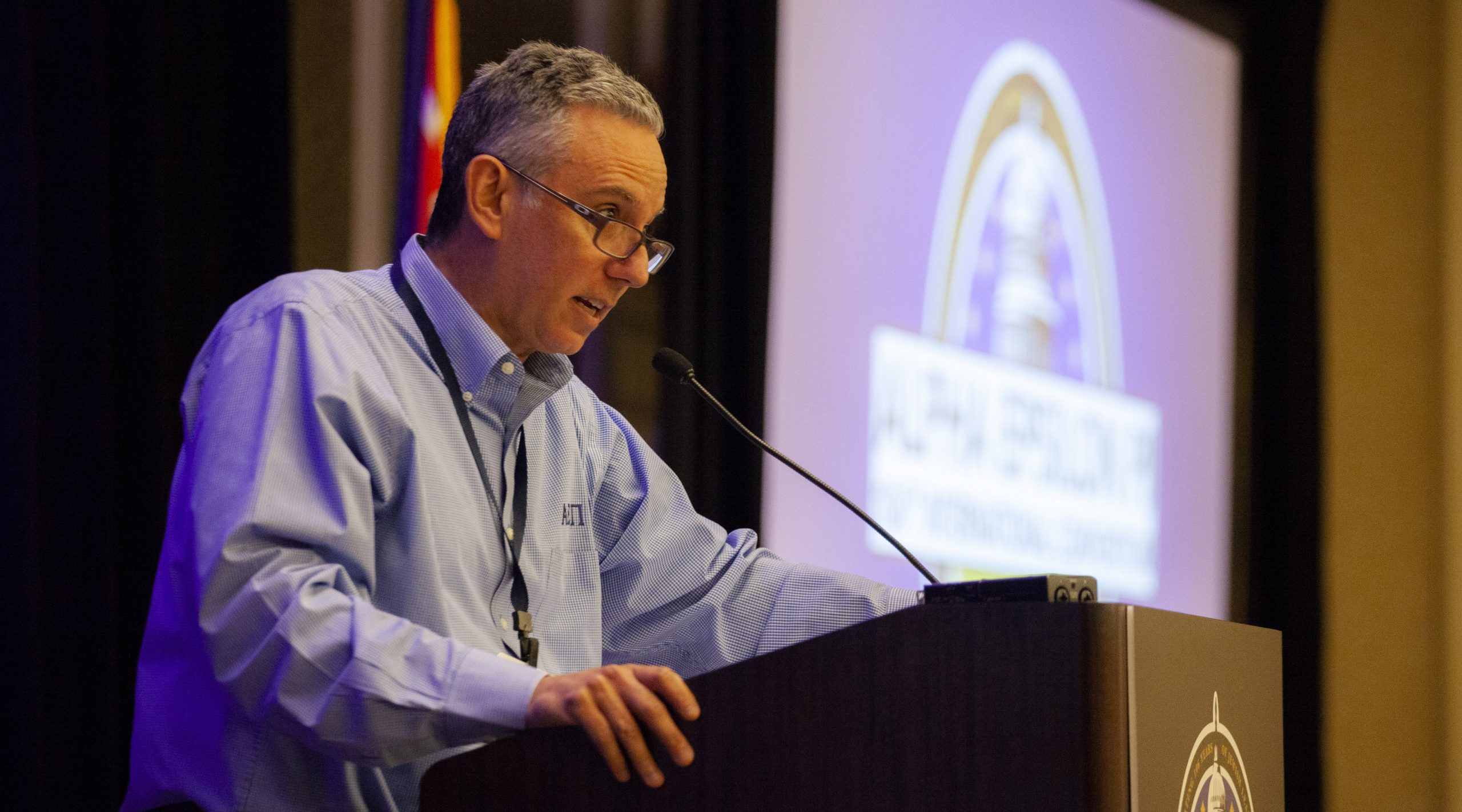 This year, we had another successful International Convention with nearly 500 Brothers and guests, including 300 undergraduates, in attendance at the Hilton Alexandria Mark Center Hotel in Alexandria, VA. Attendees were eager to learn more from staff, alumni and their peers on how to better themselves as leaders within their chapters.

Before convention officially kicked off, we held our
third annual career day. More than 40 employers and organizations came to meet our Brothers and discuss full- time jobs, mentorships and internship programs available to them. Free professional headshots were also taken, andattendees had the opportunity to sit down and have their resume critiqued by alumni and business professionals.

At the convention’s opening session, it was revealed that a number of Brothers and staff members had raised approximately $20,000 for the Alpha Epsilon Pi Foundation to fund an award in CEO Jim Fleischer’s name in honor of his courageous battle against cancer. The Fleischer Courage Award will be presented to an undergraduate or alumnus AEPi Brother who has fought a courageous battle against difficult odds.

Jim Fleischer also announced to the convention that the Supreme Board of Governors had voted that two colonies will be receiving their charters this 2019-2020 academic year: Elon University and Wayne State University. Mazel Tov to these colonies and their Brothers who have worked so hard to receive this honor!

Following our annual Shabbat dinner on Friday, AEPi hosted its second annual #BROneg, AEPi’s twist on the Jewish Oneg. Prizes such as rush shirts, a rush banner, a Nintendo Switch and DJ speakers were raffled off thanks to #BROneg sponsors OmegaFi and JNF. Brothers enjoyed desserts, played games like giant Jenga, life-size pong and cornhole and had a great time!

At AEPi’s Official Philanthropy Lunch, it was announced that our undergraduate Brothers had completed their goal to raise $1 million — $100,000 each for 10 worthy Jewish and Israeli causes. We are amazingly proud of our Brothers’ commitment to Tikkun Olam, repairing the world.

“Giving to Jewish and Israeli causes is one of the things that separates AEPi from others. Giving $1 million to these causes — all money raised by our undergraduate Brothers — is what makes AEPi special in the Jewish and Greek world,” said AEPi CEO Jim Fleischer (Kent State, 1993).

What a week! We can’t believe it flew by so quickly, but look forward to the 107th International Convention in Atlanta, GA at the beautiful Atlanta Marriott Marquis from Sunday, July 26 to Sunday, August 2. The Summer Leadership Series for Undergraduates begin on Sunday, July 25! We hope to see you there. Registration is now open at aepi.org/convention.