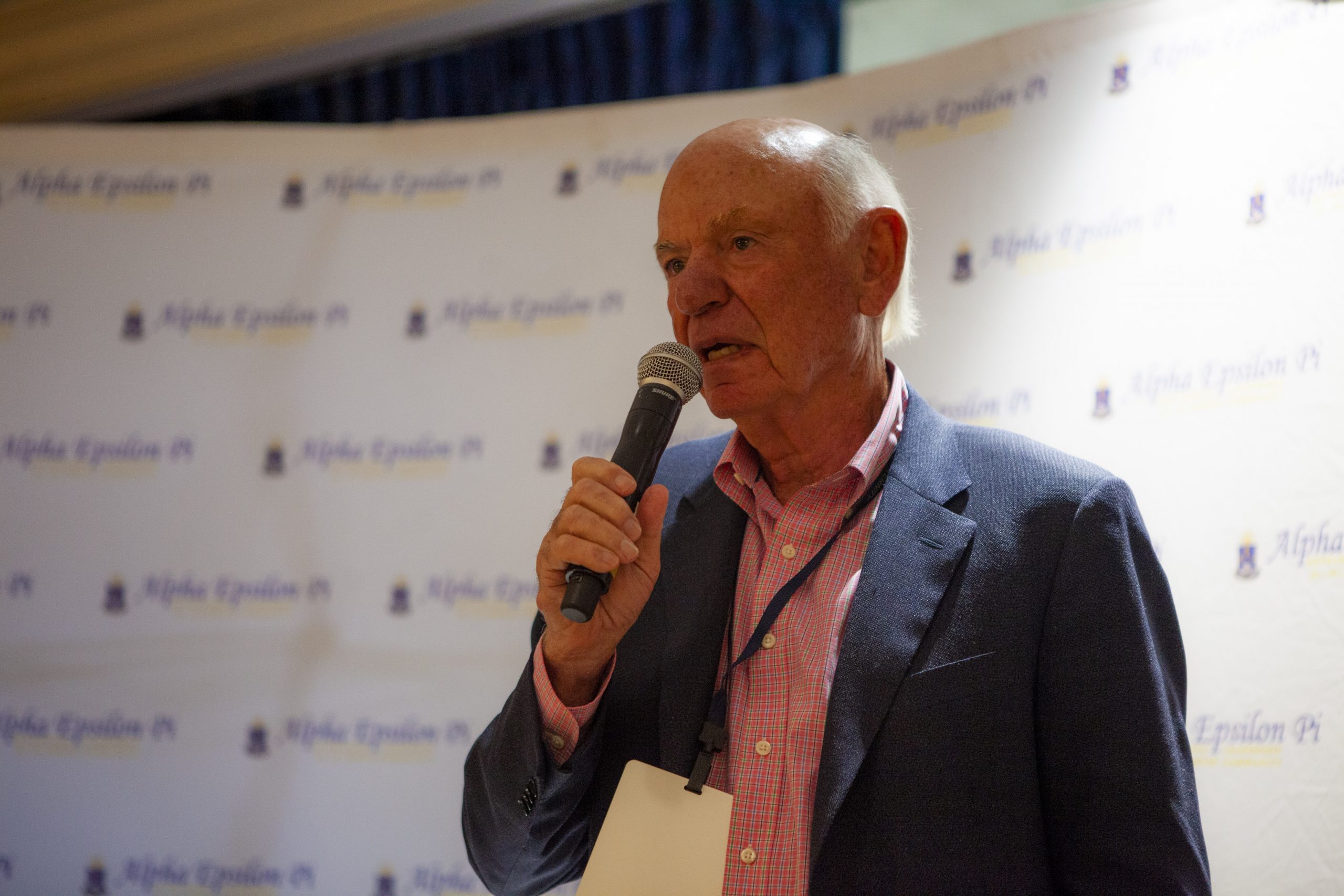 When Mike Leven (Tufts, 1959) graduated from college, he never imagined that one day he would serve as the President and Chief Operating Officer of the Las Vegas Sands Corporation, become the Chairman and CEO of the Georgia Aquarium, or launch the Jewish Future Pledge with the ambitious goal of securing the Jewish future. But, as an AEPi Brother, he knew he had the leadership skills to succeed professionally and to make a difference for his community.

“I decided that I wanted to go into advertising and public relations, which I got to by working in sales,” said Leven. “But I never thought of a hospitality career, and certainly never thought of a gaming career. I just sort of put my head down and did my jobs.”

When an early position in advertising at the Roosevelt Hotel was canceled after a month, Leven was transferred to the sales department, where he achieved record results, though he had never previously sold anything professionally. His only training was AEPi Rush Week, when he recruited Brothers for his fraternity.

Leven continued to grow in his career, taking on new opportunities with passion and purpose – including serving as the President and COO of Holiday Inn Worldwide, during which he oversaw the launch and growth of the Holiday Inn Express brand. While accepting challenges and exceeding expectations, Leven became known as an “industry icon” and a “marketing genius.” And Leven’s bold approach extended far beyond business.

Ensuring the Jewish Future with a Simple Solution

When Leven identifies a problem, his first instinct is to search for a solution. This is exactly what he did when he realized his own people were in trouble.

“We are a people who have survived and thrived against all odds. Our values and wisdom are constant, relevant, and foster virtuous, meaningful living, and we have shared unbelievable innovations in technology, science, medicine and beyond,” said Leven. “But, today, the Jewish future is at stake. It costs hundreds of millions of dollars to support the Jewish community’s infrastructure, and those dollars are quickly diminishing.”

It used to be well-established that Jewish families would donate most of their philanthropic assets to Jewish causes, whether it was a few pennies they dropped in the JNF tzedakah box or an annual check mailed to their local Jewish Federation. Today, this is no longer the case, as many Jews have decided to diversify and/or have become estranged from Israel or Jewish communal life. As a result, Jewish institutions and organizations are facing an uncertain and precarious future.

True to his character, Leven decided to meet the challenge head-on and pinpointed a golden opportunity.

“We are in the process of the largest generational wealth transfer in history. Reports estimate that $68 trillion will passed on to millennials and charitable causes in the United States alone over the next 25 years,” said Leven. “Of this, it is estimated that $6.3 trillion will be allocated for charities — and about 20 percent of that, more than 1.26 trillion charitable dollars — will be in Jewish hands. If our dream is realized, then $630 billion will be available to secure the Jewish future.”

To leverage this opportunity, Leven has launched the Jewish Future Pledge, a movement based on individuals’ and families’ promises to pledge 50% or more of their charitable dollars transferred at death to Jewish organizations and the State of Israel. The Jewish Future Pledge includes three steps: Sign it. Seal it. Share it. Individuals and families commit to the pledge, legalize it in their estate planning, and then share with their family and friends what the pledge means to them and why it reflects their values.

“This is not a fundraiser. It is a monumental chance to sustain the financial future of the Jewish people, and to ensure that our values and wisdom endure for generations. You don’t need to be a millionaire or have a family fund to participate. This is the beginning of a movement for all of us,” said Leven. “Committing to the Jewish Future Pledge and then having a conversation with my wife, kids, and grandkids about the importance of holding onto our Jewish heritage and giving Jewishly has been so meaningful. Through the Jewish Future Pledge, we can each solidify our legacy and safeguard the future of the Jewish people.”

An Opportunity for All of Us

“Jewish foundations represent a small fraction of Jewish giving in America, but they often set trends and lend credibility to the causes they invest in, said Todd J. Sukol, Executive Director of the Mayberg Foundation, and AEPi alumnus. “The Jewish Future Pledge encourages foundations to review bylaws, policies and procedures to make sure resources are used in accordance with donors’ intents and values. This gives us all a chance to do a better job of putting our missions into action and making a lasting, positive difference for the Jewish people.”

Empowered by the Jewish Future Pledge’s potential to make a lasting difference for the Jewish community, AEPi Brothers have been some of the first people to jump on board.

“I’m excited about the Jewish Future Pledge and inspired by Mike Leven’s initiative to secure the Jewish future,” said AEPi’s current Supreme Master Jeff Jacobson, who is also a previous trustee of the Jewish Community Foundation of Southern Arizona. “The Jewish Future Pledge is in perfect alignment with AEPi’s mission to give back to the Jewish community. Best of all, anyone can join the movement and have a transformative role in making a lasting difference for our people.”

For more information, visit the Jewish Future Pledge at www.jewishfuturepledge.org