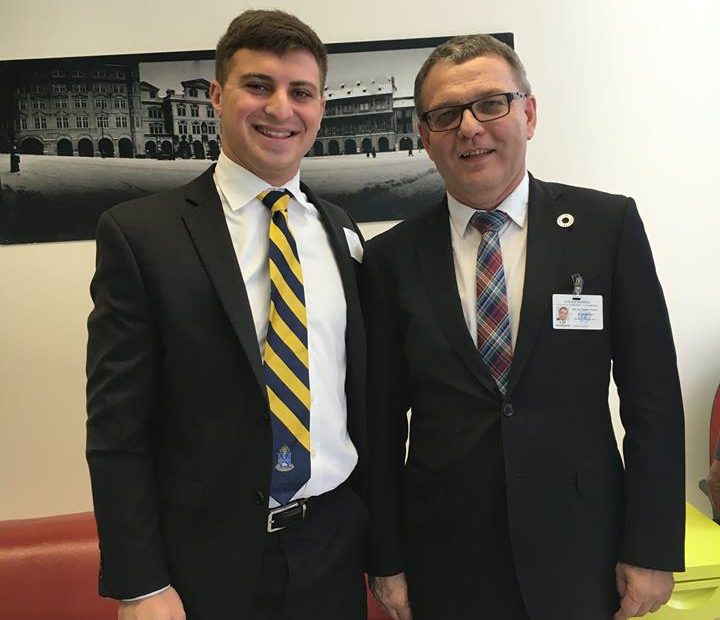 Not many college seniors can put on their resume that they spent two days lobbying representatives at the United Nations for a cause in which they strongly believe.

Brother Charlie Cohen (Bradley, 2017), along with four other undergraduate brothers (Ari Goldstein, Georgetown University; Noah Mikell, University of Minnesota; Ryan Baill, Georgia State University; and, Josh Friedland, University of Washington) did just that earlier this month when they joined with AEPi’s Executive Director Andy Borans and AEPi staff members David Marias and Jason Selby to be a part of a B’nai B’rith International delegation to meet with world leaders during the 71st United Nations General Assembly in New York.

“It was really cool to be in the room with people like the foreign minister of the Czeck Republic and bring up important topics like the proliferation of nuclear armaments in regards to Iran,” said Brother Cohen. “We were the youngest ones in the room by at least 15-20 years, but our voices needed to be heard.”

Growing up in Little Rock, Arkansas, Cohen’s upbringing may have been a little different than others. “After my freshman year, I was the only Jew in my whole high school. People knew me as the ‘Jewish Kid’. So, when I got to campus at Bradley, I decided to really dive into everything that I could. I actually decided to attend Bradley partly because the campus had an AEPi and I thought it would be the place for me.”

Cohen, a political science and public relations double major, has certainly gotten involved. Through an internship with the Jewish United Fund of Metropolitan Chicago – JUF, he works at the Israel Education Center on campus and serves on the Hillel Board. Last spring, while serving as chapter Master, he was also the president of IFC and the vice president of the student body.

“It’s kind of hard to imagine that I was once the only Jewish kid around and then, four years later, I’m at the UN talking to foreign ministers about Israel. I would look around the room and see the breadth of the Jewish communities represented and their passion for activism and love of Israel, and it has really motivated me to stay involved for the rest of my life.”