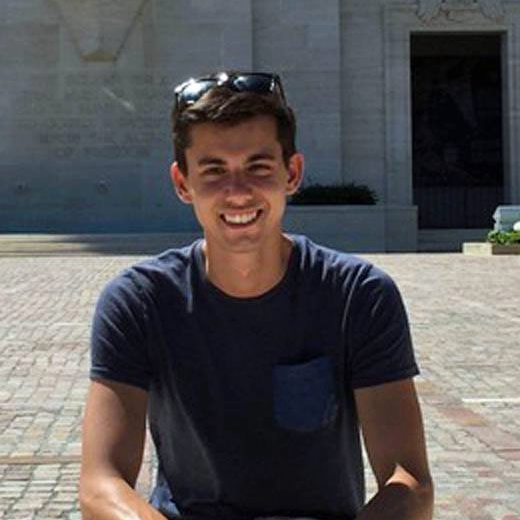 The University of California – Davis has been a battleground campus for antisemitism and BDS activities. Luckily, a group of Jewish students on campus, including many AEPi brothers, is doing everything possible to counteract these dangerous actions and, at the same time, bring the campus Jewish community together along with the greater campus community.

“I wanted to do more to get our Jewish community to show off what Israel does well and to celebrate that and, at the same time, embrace being Jewish along with the entire campus,” said this week’s #FridayPiDay nominee, Zach Nelson, a junior at Chi Delta chapter at UC-Davis.

As president of Aggies for Israel (AFI), a student-run organization dedicated to the preservation of the bond between the United States and Israel, Brother Nelson has helped fight BDS for the last several years on his campus but now he has a more inclusive message and mission. “We need to reunite our Jewish community behind what we do well and show our pride in Israel and in being Jewish. We need to work to make this an inclusive environment for every facet of life in Davis instead of being divisive. That should be our role in our community.”

“I was always involved in Jewish activities and our BDS fight but my eyes were really opened to our other responsibilities when I attended AEPi International’s Israel Engagement conference in Washington (DC) last year (a program made possible through funding from The Alpha Epsilon Pi Foundation). That conference really got me motivated and gave me some great ideas for themes and events on our campus.”

“I met some of the best and most inspiring brothers there. It really motivated me and made me want to bring their ideas to Davis. It was one of the best things I’ve ever done in AEPi.”

One of the ideas that came out of that event was to host an event with Artists for Israel (artists4israel.org). “Artists for Israel showed the people on my campus that we are proud of Israel and want everyone to know that. We had hundreds of people come see what we are doing and put their mark on our wall. It was a great time and a great experience for our whole campus.” (Video of the event can be seen here. Today, the wall is being permanently installed near a highly traveled bike path on campus behind Hillel so that it will always be a reminder to the Davis community of Israel’s inclusiveness and importance.

“We couldn’t do the things we do at Aggies for Israel without the support of my AEPi brothers and so many others on campus including my other board members (many of whom are AEPi brothers) and our ICC fellow, Yinon Raviv. We’ve had tremendous success bringing together so many groups including, of course, our AIPAC cadre, Sigma AEPi (a national Jewish sorority not affiliated with AEPi) and others.”

“I moved around a lot as a kid and when I got to Davis as a freshman, I knew that I wanted to find a Jewish place that I could call home. That’s what AEPi at Davis has been to me. From AEPi, I’ve been able to expand my involvement into other areas of Jewish life but I always know that my brothers have my back and that, while we may not agree on some things, our support for Israel and our Jewish heritage is something that we all feel strongly about.”