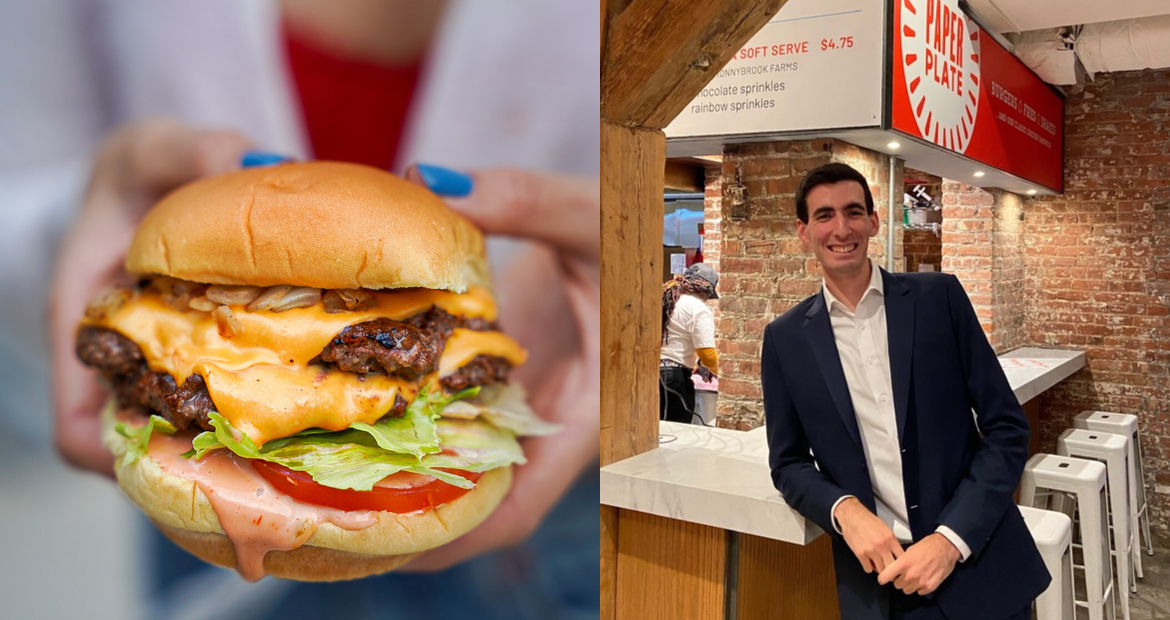 In tough economic times, starting a restaurant can be extremely risky. But Brother Aaron Ratner (Delaware, 2018) has undertaken that challenge and started Paper Plate, a restaurant with a simple mission: to create the perfect burger, fries and shake.

Brother Ratner grew up a conservative Jew going to Hebrew school and having a bar mitzvah. His family would have huge gatherings over the high holidays where 50 to 75 people would come over to his house for festive meals. He started cooking everything from brisket to turkey and a whole bunch of sides for the Jewish holidays.

When he got to the University of Delaware, Brother Ratner studied hospitality, focusing on hotels and restaurants. After undergrad he went to the The Culinary Institute of America (CIA) in Napa Valley for a year of grad school. “I learned the entire business side at UD and then my goal was to go to the CIA to fine-tune my culinary skills. I was able to put both of them together to start a business.”

During his freshman year Brother Ratner was approached by AEPi to become a Founding Father at the University of Delaware. “It definitely played a role in the entrepreneurial spirit. I think the role as a founding father taught me how to really start something from the ground up

and how to create a team environment.” His favorite AEPi memory was when the colony got its charter to become a chapter.

The Blue Chicken was Brother Ratner’s first business right out of college. “I literally started that like two days after I was done with school.” He was doing private events but with the pandemic’s onset, they decided to close and work on the next project.

In November of 2021, Brother Ratner launched a hybrid model between Shake Shack and In ‘n Out called Paper Plate. Taking some of the best features of both and adding things that were lacking, the goal is to create the best possible product out there. They started with  mobile operations, based out of the Smorgasburg food festival. They received the contract to run Celebrate Brooklyn Music Festival where they fed 13,000 people a night. Eventually, they moved out of mobile operations. “We just launched our first brick and mortar store on Thursday actually.”

Brother Ratner’s goal is to turn Paper Plate into a national brand. “We’re hoping to expand rather quickly – early to mid next year – in the Northeast and then across the nation.” They’re looking to take on investors starting early next year after getting all systems in place.

Paper Plate sources food from local stores. “Our ingredients are top-tier. We get our beef from Pat Lafrieda. They are a brisket and short rib blend.” Paper Plate smashes the meat on the griddle which gives it a nice crunch and a good flavor. “We get our milkshakes and our ice cream from Ronnie Brook Farms in upstate New York. We work with a lot with local partners.”

“It’s definitely a tough field to be in, especially now that everything is very expensive. The cost of doing business is higher than it’s ever been before. If you have the passion for it there’s a lot of opportunity, now more than ever, because people are hesitant to start new businesses right now. There’s definitely a lot of risks but big risks can lead to big rewards. You’ve just got to grind it out.”

“We’re looking to take on investors early next year.”