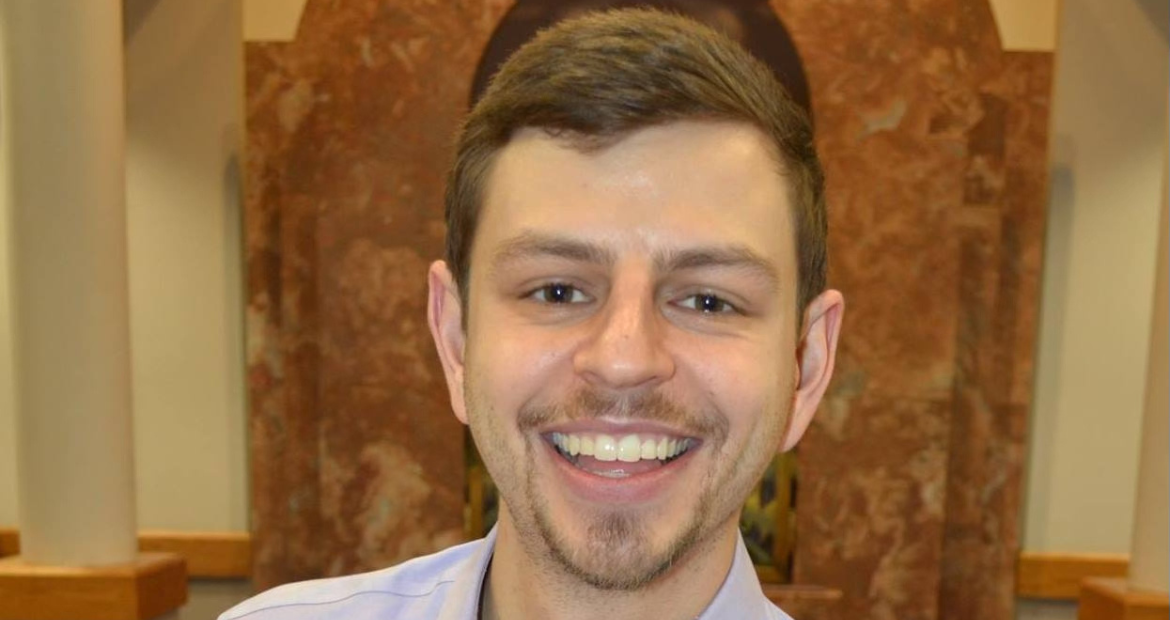 For some Brothers, being a Jewish leader in the community is a calling. From leadership in BBYO, AEPi, Interfraternity Council (IFC), and Student Government Association (SGA), Brother Cantor Jake Greenberg (Hartford, 2016) is now a leader on and off the bima at Congregation B’nai Israel in Toms River, New Jersey. He described his journey as “a series of callings.”

Growing up, Brother Greenberg attended the Krieger Schechter Day School in Baltimore, Maryland from kindergarten through eighth grade. He was raised in a household where Judaism was at the forefront. Every Friday night they had Shabbat dinner and every Saturday morning they went to services as a family. He read most of the Torah portion for his Bar Mitzvah and he would sing in the choir with his father.

Singing wasn’t the only musical activity Brother Greenberg was engaged in. “I’d say the two pillars of my household were Judaism and music.” He was required to learn an instrument, taking private lessons in violin, which he hated, so he switched to piano. “I just developed this pedigree in music where it came very naturally to me. This passion and this love for music was embedded within me at a young age and continued developing.”

Although he was very involved in the Jewish community, Brother Greenberg did not continue at a Jewish Day School for high school. “I went to a magnet school for performing arts (Carver Center for Arts and Technology) which, of course, was around 40 percent Jewish anyway.” There, he was trained in classical voice, music theory, opera and musical theater. Brother Greenberg also got involved with BBYO and was regional president his senior year.

At the University of Hartford’s Hartt School, Brother Greenberg earned a Bachelor of Music in classical voice. He was trained in classical singing, musicianship, music theory, and operatic acting classes. Though the Hartt School was extremely rigorous, Brother Greenberg was also able to take many Judaic Studies and Hebrew language courses with his sights set on being a cantor.

During his freshman year, Brother Greenberg hung out with some of the AEPi Brothers, but he wasn’t sure if Greek Life was for him. After one of the rush events, he was invited to the apartment of his eventual big Brother, Ben Cohn (Hartford, 2015), who was the then chapter master. “I wasn’t expecting this, but I was offered a bid and I said yes!” Brother Greenberg became a new member of AEPi in spring of 2013. He had a new member class of nine men with whom he is still in contact.

AEPi taught Brother Greenberg skills in the context of his career. “AEPi was really my first pulpit.” Just one month after becoming a Brother, Brother Greenberg was elected Scribe. As Scribe he wanted to make the most of the position and even created the first chapter newsletter. With his big Brother serving as Master, he learned a lot about being an organizational leader. He went on to become Lieutenant Master and then Master, where he learned skills in leadership, coordination, and communication, both internally and externally. “The chapter came to me to either make decisions or to facilitate decision-making processes.”

“As the leader of AEPi, as a liaison of AEPi, you learn things like delegation, empowering others to take ownership and being involved, utilizing their strengths, and allowing them to grow in their strengths. I can’t imagine meeting a person where those skills and lessons wouldn’t come in handy!”

Just after finishing rush, with a new member class established, the University of Hartford declared a snow day, so the Eta Upsilon chapter decided to play snow football with the new members. “Just playing football in the snow with no classes, with nothing else in the world to care about and with no other distraction –it was one of the most purely fraternal brotherly moments. It was like we were already Brothers at that moment.”

AEPi wasn’t the only campus organization which Brother Greenberg was involved in.

Brother Greenberg also ran events outside of the chapter. One of the highlights was as both a Resident Assistant and a Hillel board member his senior year, he ran an event called PB & J for a Cause for one of the local food pantries. He brought Residence Life, the Center for Community Service, and Hillel together to engage in this program. “To join all those organizations together made for an incredible event.” He was awarded Program of the Year by the Office of Residence Life for this event.

Also as an RA, Brother Greenberg hosted Shabbat dinners for his other RAs. “I was the only Jewish person on my staff. I ran shabbat dinners and taught them about the traditions such as the hamotzi and kiddush.”

On the IFC Executive Board, Brother Greenberg was Vice President of Communication and PR. “I was most proud of painting Greek Life in a positive light.” One of his projects was designing a shirt that said “Cancer Sucks” in bright pink for all of Greek Life to wear at the annual Making Strides Against Breast Cancer Walk. “There were hundreds of us there, so if you can imagine, it was just incredible seeing everyone together as this one enormous team.”

Along with a rigorous music program schedule, Brother Greenberg also had weekly cantorial coachings with Cantor Sanford Cohn (Z”L) at The Emanuel Synagogue in West Hartford. “It really turned out to be more of an apprenticeship!” One day, Brother Greenberg was in Cantor Cohn’s office, and before they started, Cantor Cohn, in a mobster movie-like fashion, slid a piece of paper across the table. It was a flier for the Jewish Theological Seminary’s (JTS) open house for the Cantorial and Rabbinical Schools. Cantor Cohn said, “Jake, we’ve been doing some really great work; it feels like this could be something for you and I really think you should consider signing up.” Brother Greenberg responded, “I hate to tell you this…but I’ve already signed up.”

After graduating from JTS, Brother Greenberg started as the Interim Cantor at Congregation B’nai Israel in New Jersey for three weekends a month and holidays. He was leading shabbat and holiday services, delivering sermons, and teaching in the religious school. “I wanted a job like this where I had the opportunity to impact the community in a variety of ways.” He has gotten to know the people of the community and has written a lot of original melodies to liturgy, which the congregation eats up.

Currently, as the full-time Cantor and Youth Director of Congregation, Brother Greenberg leads a variety of other activities within the synagogue. He offers Adult Ed classes. “I taught a class on the Mishneh Torah, the code of Jewish law by the Rambam. If there was a holiday coming up, we learned about it from that lens.” He also led classes on the music and meaning of the Zemirot, or shabbat table songs sung on Friday nights and Saturday afternoons.

As the youth director for the synagogue’s USY and Kadima chapters, Brother Greenberg oversees and advises the chapter and the E-board to help plan and coordinate events like leading Friday night services. “We had this rehearsal the Wednesday before and I have never seen so much energy and ruach in a sanctuary before in my life.”

“You might be wondering where I got those skills from… AEPi definitely set me up for success.”

When asked about advice he would give to people considering the path of a Jewish clergy member, he said, “Just realize that you’re on a journey when it comes to your Jewish identity –Jewish identity is all about being on a journey. For clergy who have been doing it for decades they are still on a journey, so don’t be afraid. You don’t have to be 100% confident because it’s a learning experience, a growing experience, and an adventure.”

Lastly, Cantor Greenberg brought up his many mentors over the years, like Cantor Sanford Cohn (Z”L), and he added, “Find that person who helps you make sense of Judaism, who is able to present Judaism in a way that is interesting and engaging, and that hits home for you.”