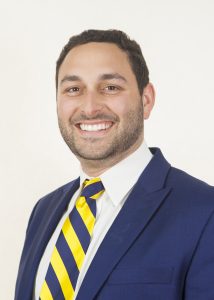 “These are particularly difficult times for Jewish students on college campuses with ever-increasing antisemitism and increasing disconnect between student groups and university administrations,” said Rob Derdiger, CEO of Alpha Epsilon Pi International. “Having Michael join our professional staff will be a huge asset. His experience working with our organization coupled with his professional Jewish communal experiences will be ideal to help AEPi thrive.”

Waitz, a 2009 graduate of DePaul University, has worked for Jewish non-profits (including AEPi) for several years. Previously, he served as North American Director at Shorashim and as AEPi’s Director of Centennial Development and Director of Programming.

“I am thrilled to return to Alpha Epsilon Pi to work alongside my friend, Rob Derdiger, and help lead AEPi. It is a dream to work for an organization that means so much to the Jewish community and which I am so passionate about,” said Waitz.

A resident of Highland Park, IL, Waitz lives with his wife Aviva and two children, Jonah and Emma.

Alpha Epsilon Pi is the world’s leading Jewish college fraternity, operating chapters on more than 150 college campuses in the United States, Canada, the U.K. and Israel. Founded in 1913, AEPi has more than 110,000 living alumni. The fraternity’s mission – developing the future leaders of the Jewish communities – is demonstrated every day through acts of brotherhood, Tzedakah (charity), social awareness and support for Jewish communities and Israel.