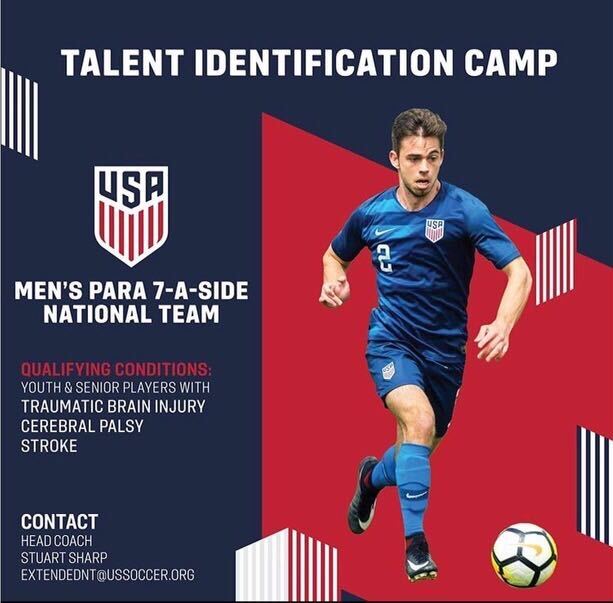 Being successful requires overcoming obstacles and perseverance. Brother Jacob Kaplan (West Virginia, 2022) was born with cerebral palsy, but that didn’t stop him from playing soccer for the U.S Paralympics seven-a-side National Team.

When he was in kindergarten, an orthopedic surgeon told Brother Kaplan’s parents that playing sports would be the best medicine and that turned into his parents getting him involved with soccer, baseball and even flag football. When he was in second or third grade he just stuck to playing soccer. “Playing sports for me at a young age was very difficult just because it was hard to move and keep up with the other kids.”

Brother Kaplan tried out for his home travel team for four years in a row. He was cut after each tryout. He tried out in another town (Matawan) and ended up making that team; but not for the reasons he originally thought. “The reason why I made that team wasn’t because I was a good player but because I had something that my coach couldn’t teach me. That was to be aggressive and desire to be out there and compete with other kids.” That competitiveness led him to making his first travel team.

Over the summer, the team played three days a week. “I showed up to every practice and played my hardest.” By the end of the summer, the coach told him he had made the team. Even though during that first season he only played 10-15 minutes per game, it wasn’t really about being as good as his friends. It was more about a new group of friends who accepted him with open arms and who were supportive. “I gave it everything I had, and made a ton of new friends. I went on this team not knowing anybody and by the end of the summer they had become really great friends of mine.”

“I quit playing soccer in my senior year of high school.. I thought it wasn’t really in the cards for me to keep playing. I wasn’t getting scouted by any school. I wasn’t going to go play at a Division two or three school.  I had given up and just focused on spending the rest of my senior year with my friends.”

Eight months later, he was searching through YouTube and came across videos of the paralympics. As he was watching a paralympic track video he wondered if there were any sports that he could compete in. He did some research online and found the paralympic soccer team and found some videos of how they were playing. He then stumbled upon their Facebook page which said that they were having tryouts. He talked to his dad who told him that he had nothing to lose.

Brother Kaplan and his father sent an email to Coach Sharp and in less than an hour they had gotten a response asking more about his impairment and about his disability and his qualifying conditions. “For the record, my condition is that I’m left side hemiplegic, so I was born with cerebral palsy on the entire left side of my body. I had a stroke in-utero and that’s what led to the development of that.”

Brother Kaplan told the coach a little bit more about his cerebral palsy and disability and gave him some more information about the teams for which he had played. “The next thing I knew, he was asking me to send him video clips of me playing.” Brother Kaplan was then invited to go to Clemson University to be a part of a combined identification camp and senior team camp.

Brother Kaplan currently majors in exercise physiology with an emphasis in health professions at West Virginia University (WVU). Still unsure of what he wants to do after graduation, his current goal after graduating is to go to medical school. “I went to WVU because I wanted to be more independent. I also wanted to make new friends and it was a good opportunity to meet some new people.” When choosing his friends, he wanted to make sure that he was meeting the right people.

When Brother Kaplan was a freshman he knew that he wanted to rush a fraternity but wasn’t too sure which one he wanted. “My dad was a Brother of Sigma Alpha Epsilon in Maryland. I rushed a few Fraternities. AEPi contacted me. They had gotten my phone number through Chabad.” An AEPi Brother called him and asked if he would like to come over for a Barbeque. Having nothing to lose, he showed up and instantly connected with all the guys there. Seeing that they were good people, it was exactly what he was looking for when rushing a fraternity.

“I definitely did share a love of sports with all of my Brothers. When they found out I played soccer for the Paralympic team they really loved it. I needed to take three weeks off and they were willing to work with me during my new member education so that I could go to my soccer practice.”

As Philanthropy Chair, Brother Kaplan raised $7,500 through various events such as a volleyball tournament and Super Bowl squares. As Vice President, he found the chapter a new larger house. “It was nice to learn about all the different positions that the fraternity has to offer and other opportunities in AEPi.” His favorite AEPi memories were when they would go to conclave before the pandemic.

Brother Kaplan has learned a lot from being highly involved in AEPi and training for the Para World Cup. “AEPi has taught me a lot about time management. Being able to manage time properly so that I can get my school work done and make sure I’m getting my workouts in is important.”

Brother Kaplan’s chapter Brothers have been super supportive of him. “I went to my first tournament in fall of 2018. We went to the Copa Americas in Ecuador. I gave the Brothers the link to watch my games. They watched it and were sending me text messages throughout the tournament.”

Not only has Brother Kaplan had the opportunity to travel the world but he has also gotten to meet a ton of amazing people. His teammates come from all different backgrounds from across the United States and have different disabilities. “Some of my teammates have had strokes at some time in their life but most are military veterans and have sustained an injury while fighting overseas. Now, instead of fighting for our country overseas, they get to represent and fight for our country on the soccer field.”

“At the end of the day, the only person preventing you from achieving your dreams is you. So, as long as you can focus and get yourself in order, I think that anything is possible and you can overcome any obstacles. It’s just a matter of how hard you’re willing to work and how badly you want it.”