Voices: Why I Rock 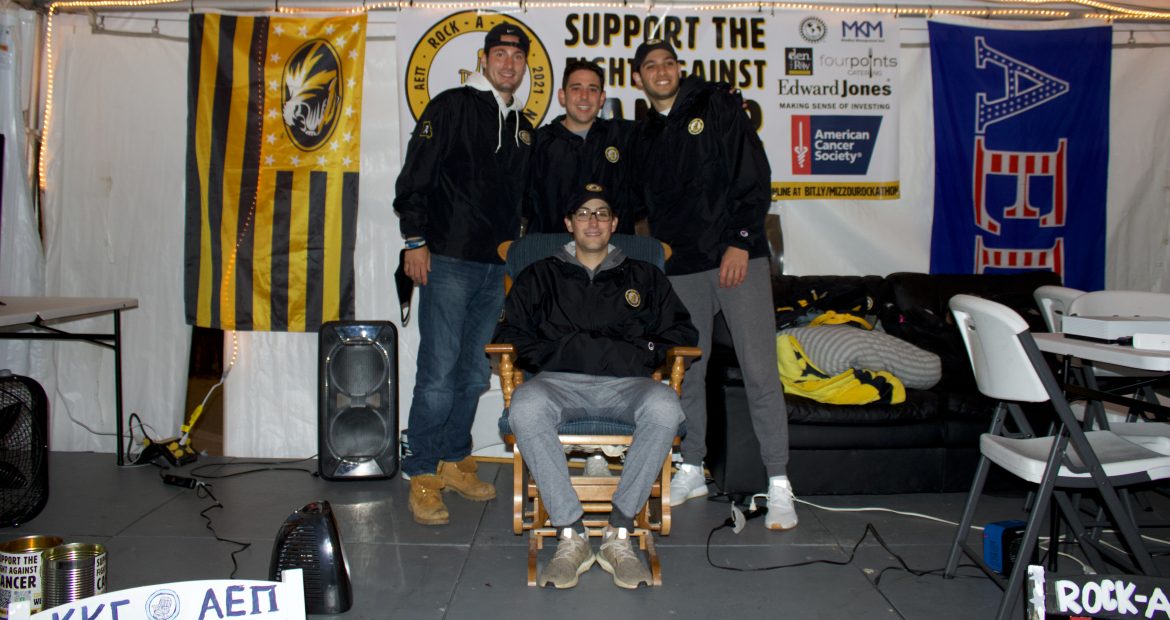 In 2018, we added a column called AEPi Voices that was dedicated to highlighting those with something to say about their positive experience. If you know someone who would want to write an op-ed, email us at [email protected]! Brother Brian Carter (Missouri, 2022) is a senior from the University of Missouri. Every two years, the Mu Deuteron chapter hosts the largest single-fraternity philanthropy event in the nation: AEPi Rock-A-Thon. This is Brother Carter’s story as the chosen “rocker,” who is the centerpiece of the entire philanthropic operation.

A couple of weeks ago, I did one of the most important things I’ve done so far in my life.

At 6:00 a.m. on Thursday, April 15, I sat down in a rocking chair in the center of our campus at University of Missouri and I didn’t get back up until that Saturday night at 9:00 p.m. For 52 years, AEPi Brothers at Missouri – like me – have participated in Rock-A-Thon and have raised over a combined $1 million for various charities in that time. This year, we set out to raise money for the American Cancer Society.

While I sat and rocked in my chair for 63 hours, my Mu Deuteron chapter Brothers fanned out across the community and raised money to support this effort. While we normally raise funds through a gala in St. Louis with a lot of our alumni and asking for donation at Cardinals and Royals games, we were unable to do those this year because of COVID restrictions. My Brothers really had to work hard to get this done.

From 7:30 a.m. until 1:30 a.m., our Brothers talked to commuters, pedestrians, shoppers and other students and cajoled them to support Rock-A-Thon.

Maybe I had the easiest job, or maybe it was the hardest, but it was certainly the most high profile. I was on an all-liquid diet (to make bathroom breaks – on the chair –a little easier) but, for the most part, I bundled up and rocked. Cancer has hit the families of a number of our Brothers very hard. My grandmother passed away from cancer and I have two aunts who are currently in remission after battling cancer. I knew that my Brothers were going to do their job to raise this money.

For a number of years, Rock-A-Thon has been heralded as the single largest fraternity philanthropy event in the country. I, and all of my AEPi Brothers, are really proud of this accomplishment. It’s one of the reasons I joined the chapter…though having my two older (biological) brothers here and in AEPi was also a big influence. Both of them told me that Rock-A-Thon was one of the proudest achievements of their lives.

For my chapter, Rock-A-Thon is more than just a huge philanthropic undertaking. It’s also a rallying cry, an opportunity to work together towards a common goal and a chance to show our campus and the country that AEPi Brothers care. Heading into that Thursday morning, the chapter’s morale was at an all-time high. Guys were really excited to get out there and raise money. It didn’t take just hard work. It took Brotherhood.

When the end came on Saturday night – when I was just a few minutes away from being able to stand up for the first time in more than two days – I took a moment to look around. My parents and family had come in from St. Louis to be with me for the final hours rocking. All of my Brothers were gathered around us as we began the countdown to the final accounting of the money raised.

I stood up. Finally. And, the total was announced. $180,000 raised to help fight cancer. A new record…and in the middle of a pandemic. My pledge Brothers surrounded me, and we hugged each other. I thought about those we’ve all lost to cancer and how this money can make a real difference for a lot of people. This is why I rock.