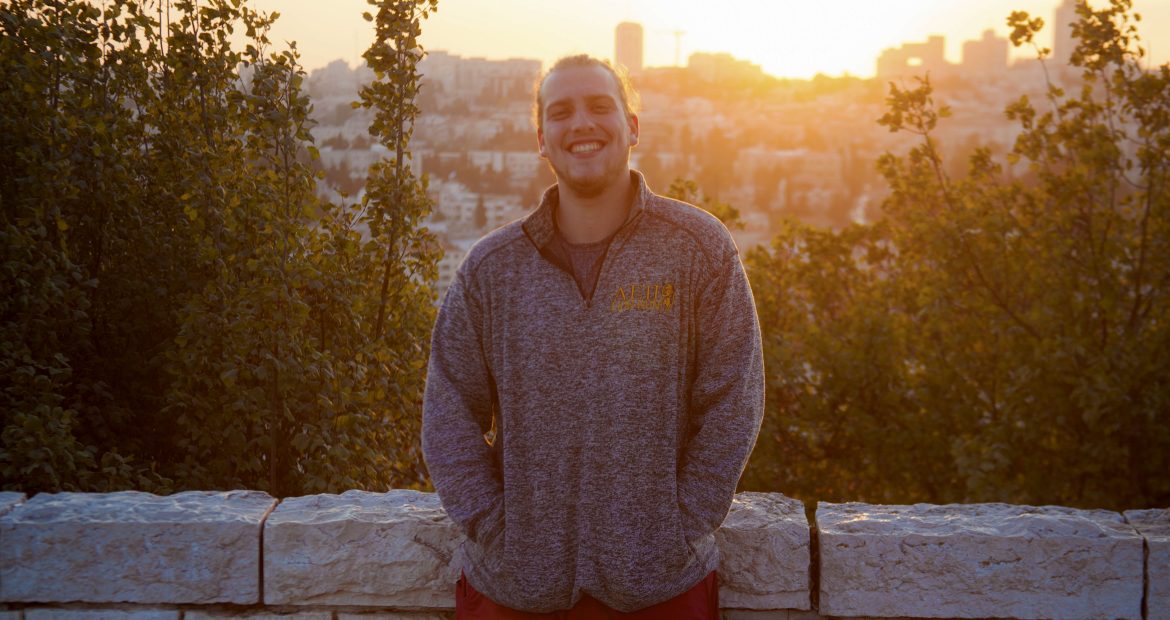 Brother Max Frischman (Virginia Tech, 2015) is an “idea guy.” From working with several startups to pioneering Alpha Epsilon Pi’s high school engagement programs, taking ambitious ideas and bringing them to life is his calling. Two short years ago, he made his biggest idea — leaving his home in the United States and moving to Jerusalem — a reality.

Brother Frischman started working with AEPi for the same reason as most: he wanted to give back to the fraternity that gave him so much. While pursuing his bachelor’s degree at Virginia Tech, he accepted an internship with AEPi in the summer of 2014. After his internship, he was sure that he wanted to work for the International Fraternity. “One of the biggest influences for me was Andy Griesinger,” he said. “He was the first person working for AEPi from Virginia Tech that I had a relationship with, and he was also the master of my chapter.”

“I looked up to Andy Griesinger not just because he was the master, but because of what he had gone through in his life, who he had become, what he was doing. And, I always thought it was important to give back. AEPi gave me so much in college, I think that what I wanted to do was give back to the organization.”

Brother Frischman—along with other international staff—was instrumental in creating AEPi’s high school engagement program, which engages Jewish teenagers in building a strong connection to Judaism and Jewish identity. “I found AEPi indirectly through BBYO, which is the high school equivalent of AEPi,” said Brother Frischman. “BBYO instilled the importance of engaging the Jewish youth before they get to college.”

While working for AEPi, Brother Frischman’s entrepreneurial spirit led him to pursue his business ideas and start Sleek Life Design, a company that uniquely designs everyday gadgets. The company’s flagship products are the ONO Roller, a device designed to relieve stress and keep your hands occupied, as well as minimalist wallets and key organizers.

After three years of AEPi service, he felt confident that the high school engagement programs could stand on their legs. With his company moving forward, Brother Frischman was ready to take the next step in his life by making Aliyah and moving to Jerusalem.

“Breaking out of my comfort zone and going to a place where you don’t speak the language is difficult,” he said. “Leaving my friends since kindergarten and my family was hard. I was figuring out how to start over with four suitcases and just pick up from there.” While Brother Frischman knew that he had his company as a fallback, his goal in moving to Israel wasn’t to just run a company but to fully immerse himself in the culture. He began attending an ulpan—an Israeli institute for learning the Hebrew language—and connected with other Olim Chadashim, or new immigrants making Aliyah. Out of 200 people attending the ulpan, Brother Frischman was one of only five Americans. “It was the first time in my life that I felt like a minority.”

Being in Israel for two years, Brother Frischman finds himself at home. “I think of myself as a tour guide,” he said. He has experience as a madrich, or teacher, on Israel tours with AEPi and BBYO, and enjoys showing those closest to him the parts of Israel that most people don’t know about. “For example, my girlfriend’s parents have lived in Israel for years and have never visited the Christian Quarter of the Old City. It’s cool to take people to places they’ve never been before and immerse them in this culture.”

During the COVID-19 pandemic, Brother Frischman notes the resiliency and dedication of Jerusalem’s citizens, from holding minyans while abiding with lockdown regulations to taking care of the less fortunate and elderly. A prime example of the latter was AEPi Brother Amitai Gispan’s Passover Packs, which were given out so people could have a meaningful Passover Seder in lockdown. “I was taken back by it,” Brother Frischman said. “Having someone make this gesture for me just to make a holiday more comfortable…I was speechless.”

In Jerusalem, Brother Frischman works as the Director of Business Development for a financial consulting agency. “I like to help people who have ideas start companies,” he said. He attributes his own company’s success to his network of Brothers and what he learned in AEPi. “I’ve learned from their mistakes and what they’ve shared with me.” Brother Frischman wants his Brothers to know that whatever their ideas may be, they should utilize AEPi’s network of Brothers in a wide range of professional fields—including himself. “I want to help as many AEPis as I can. It doesn’t have to be related to business. It could be about Aliyah or anything under the sun. I’m here as a Brother…and as a resource to you.