AEPi Voices: How My Son Became My Brother 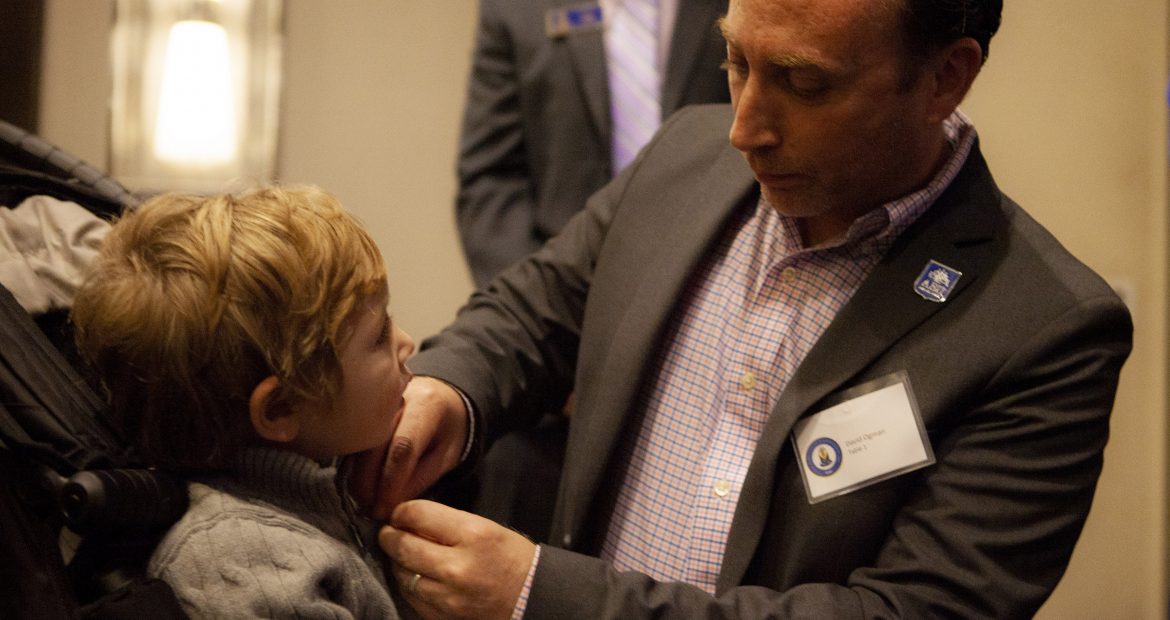 Brother David Ogman (Florida, 1998) was recently honored at our South Florida Celebration Gala on Sunday, December 8, 2019 for his contributions to AEPi. He is the founder and president of the AEPi South Florida Business & Professionals Alumni Network. David is a wealth advisor at Merrill Lynch and his wife, Stacey, is a senior state attorney representing abused, abandoned and neglected children. At the event, their son, Jordan Ogman, had the honor of being initiated into the fraternity by Supreme Scribe Scott Knapp (Florida State, 2002). Jordan is fighting a debilitating, fatal, neurodegenerative Jewish genetic disease. Because of the progression of his disease, Brother Jordan Ogman likely won’t have the chance to pledge the fraternity in college and be initiated. Below is David’s story on how this opportunity came to be. For more information on Jordan’s disease or updates about Jordan, check out his GoFundMe page. 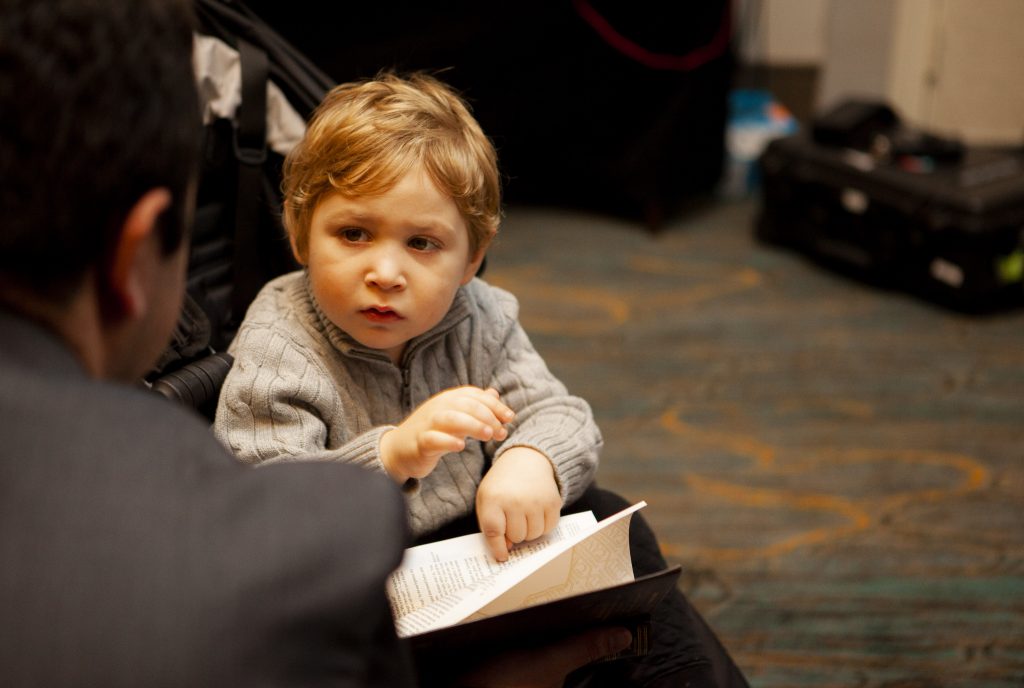 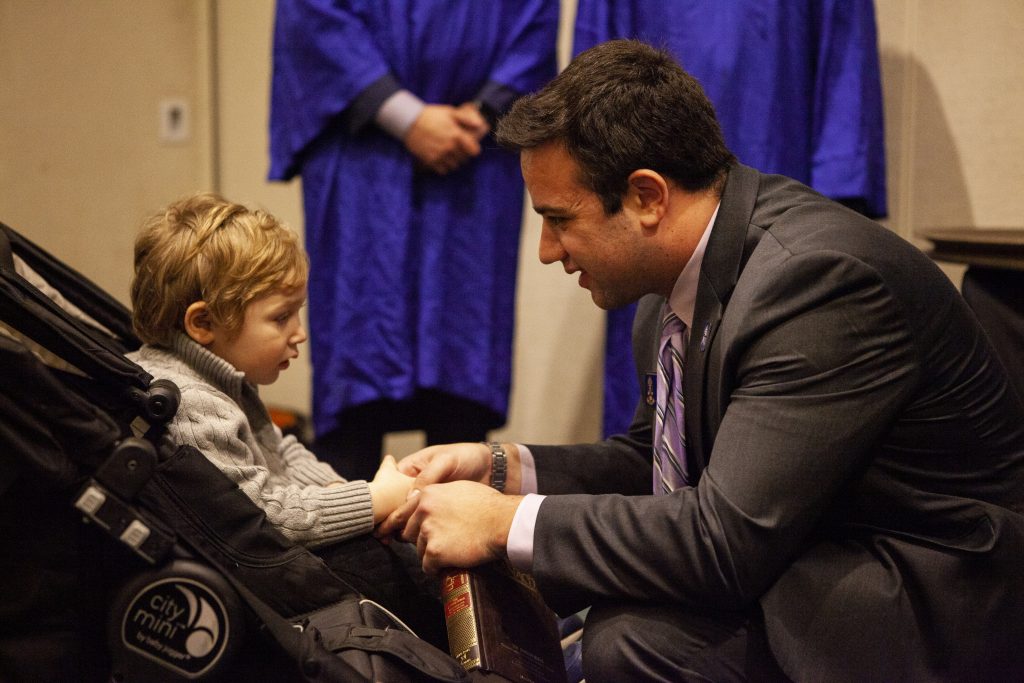 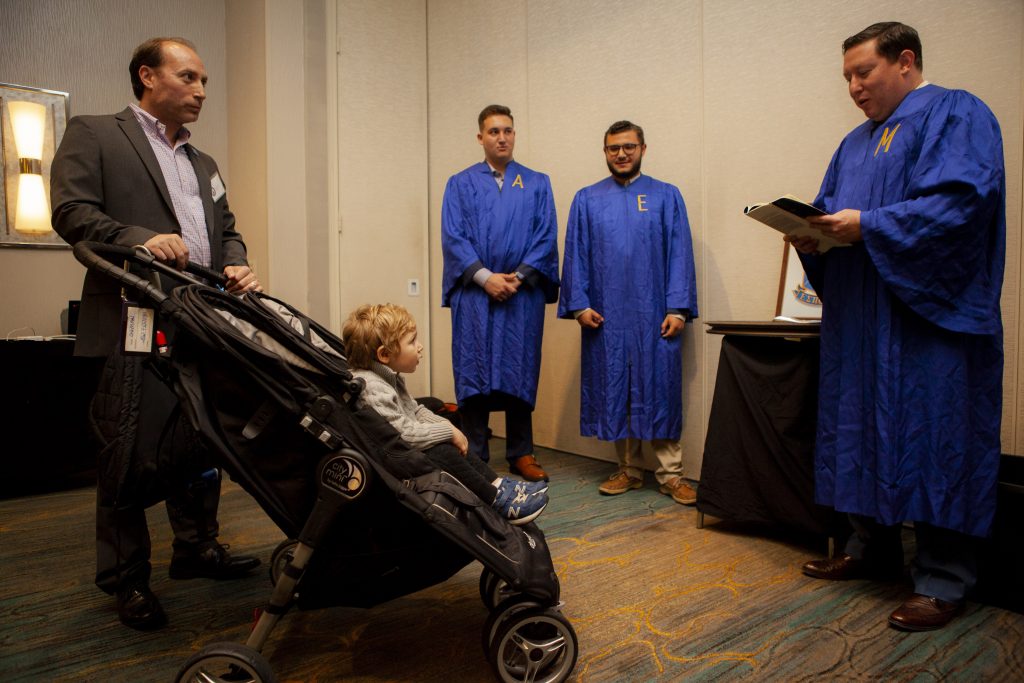 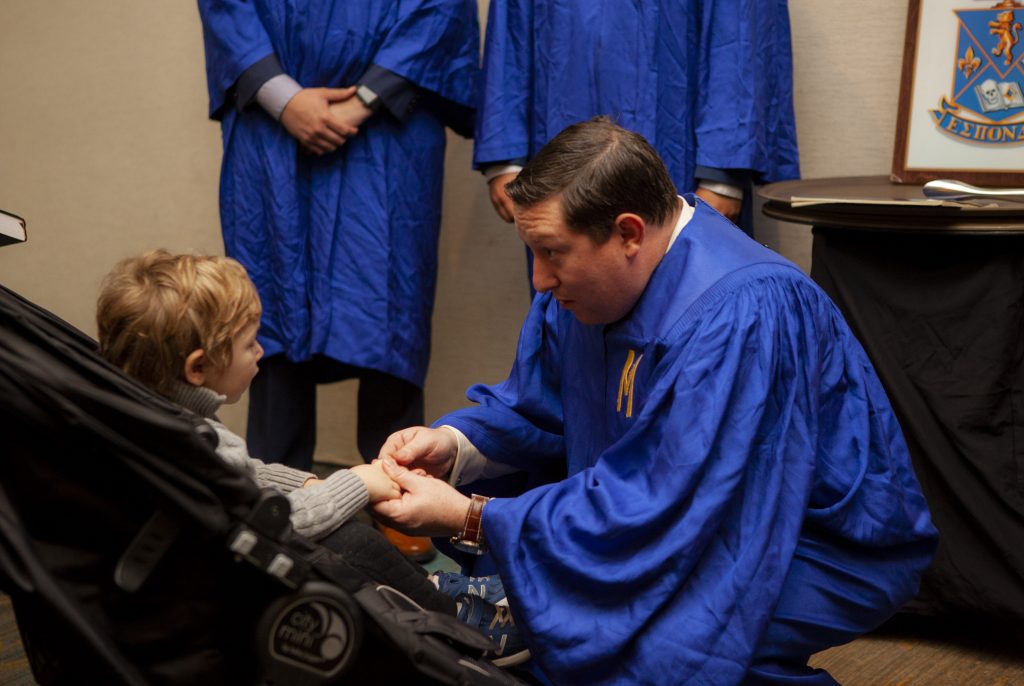 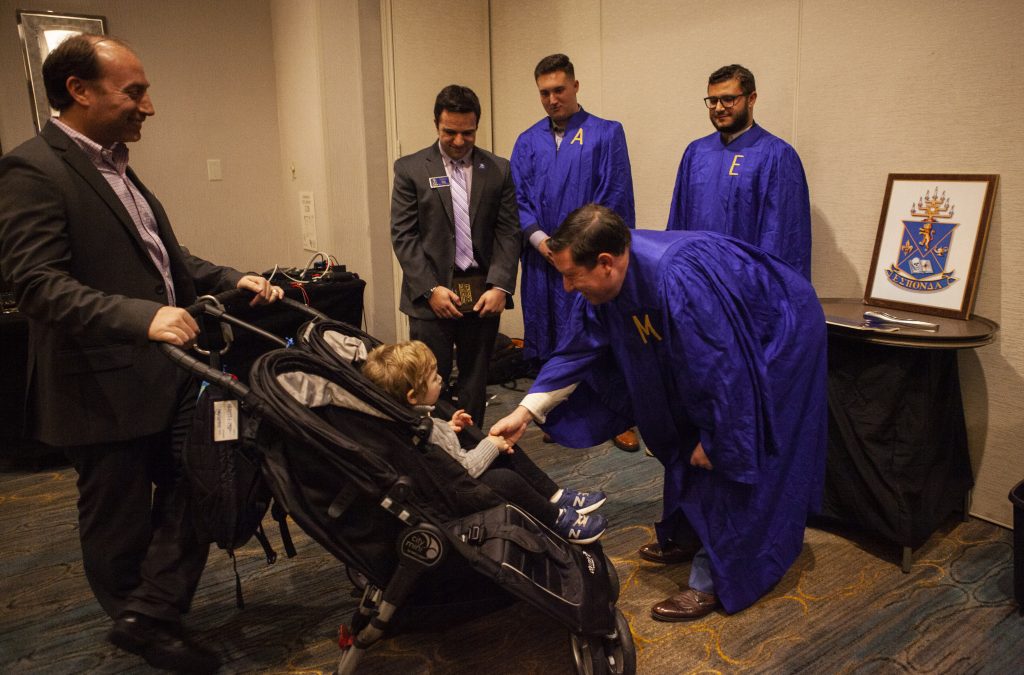 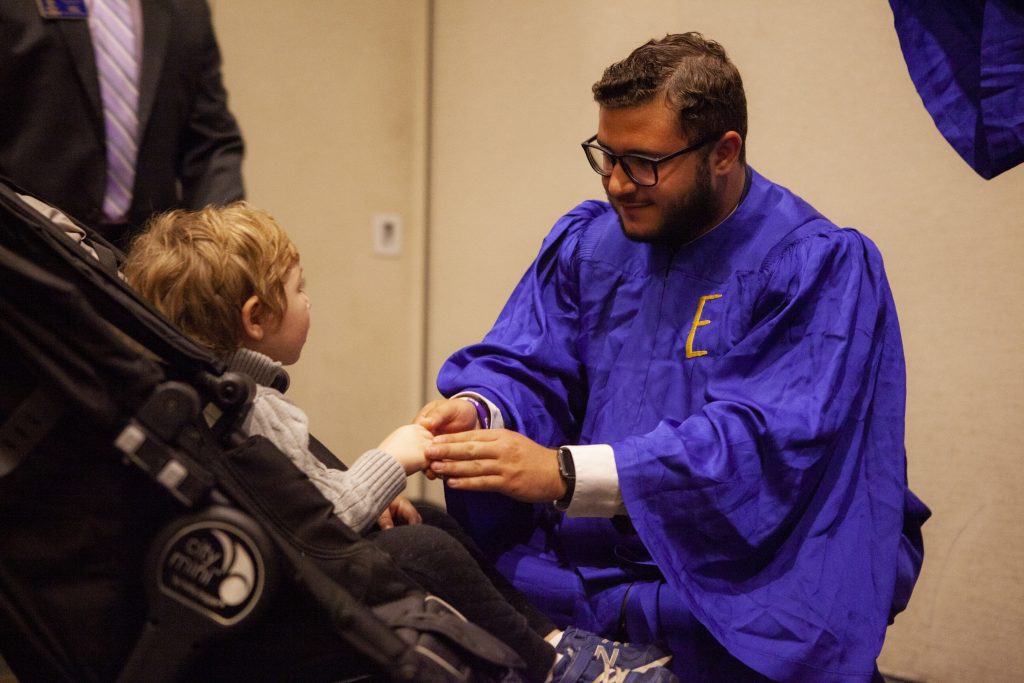 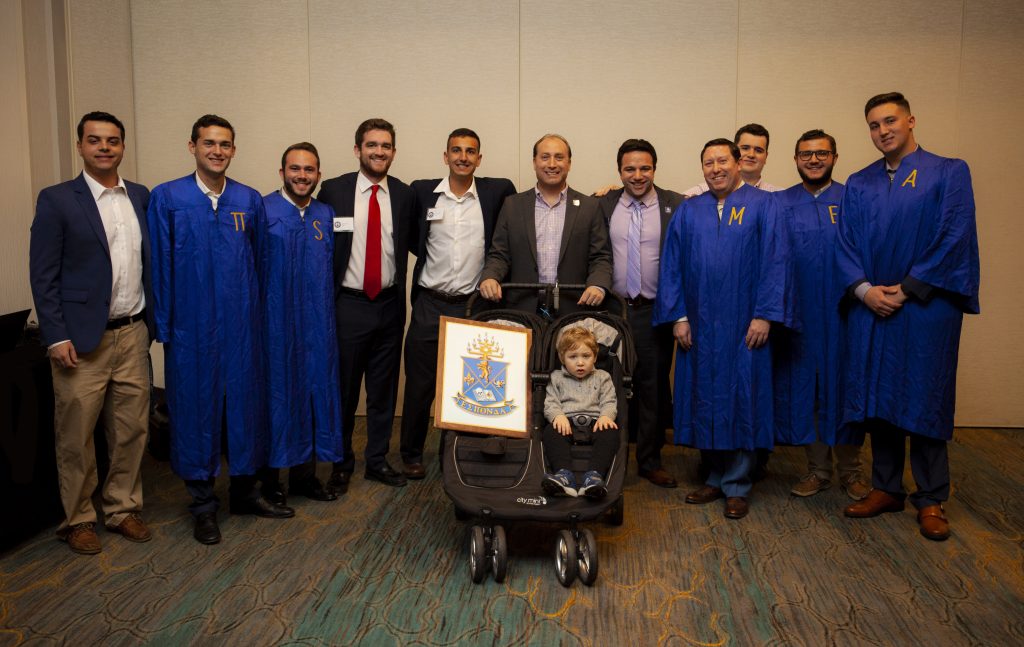 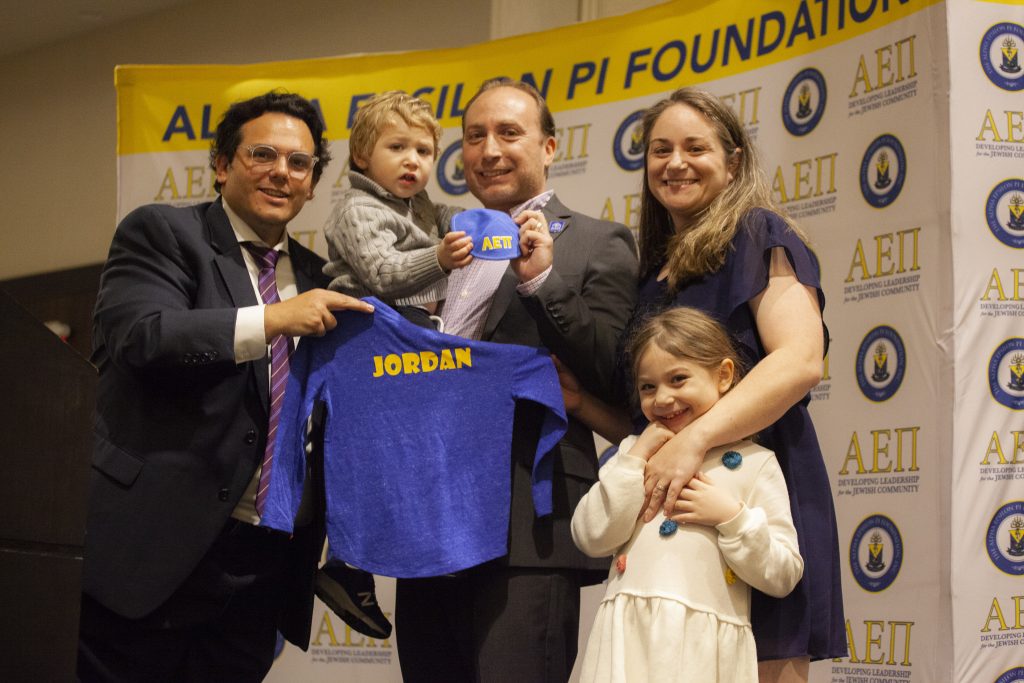 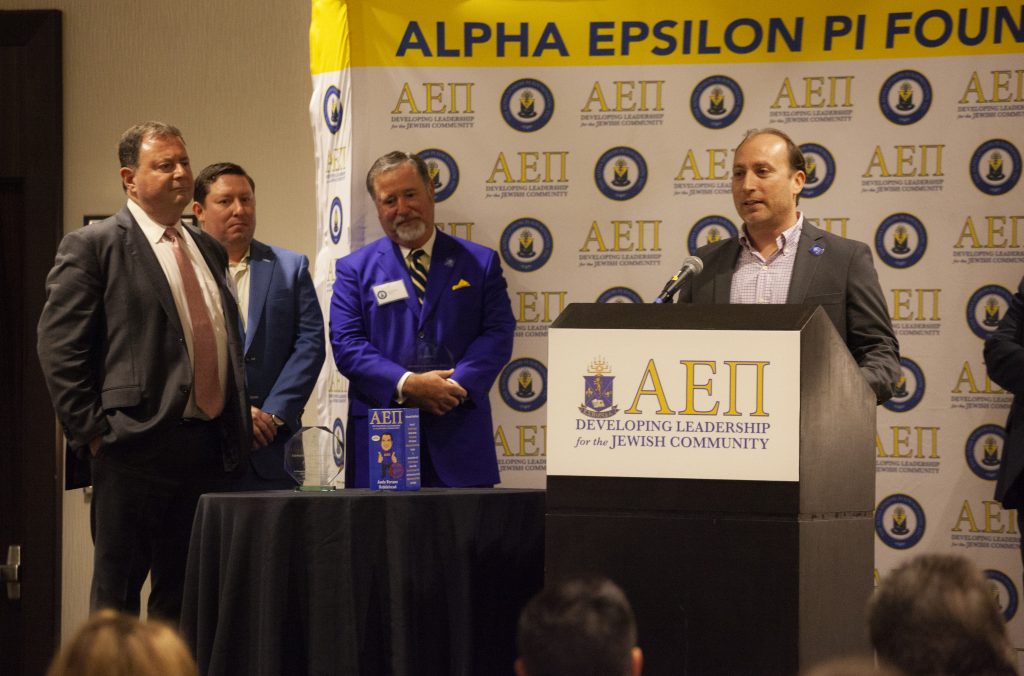 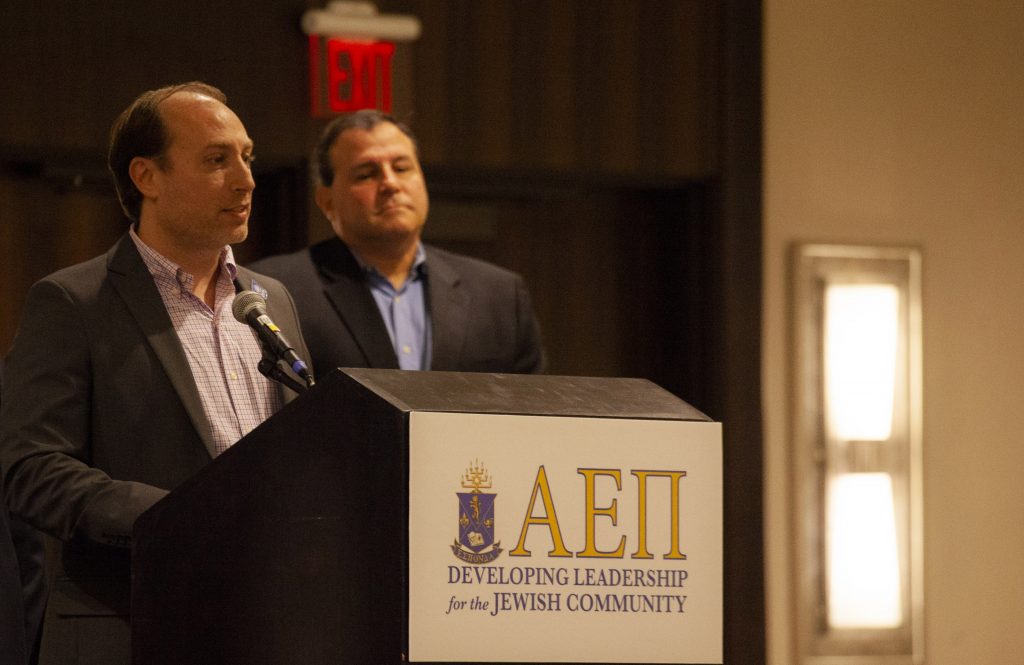 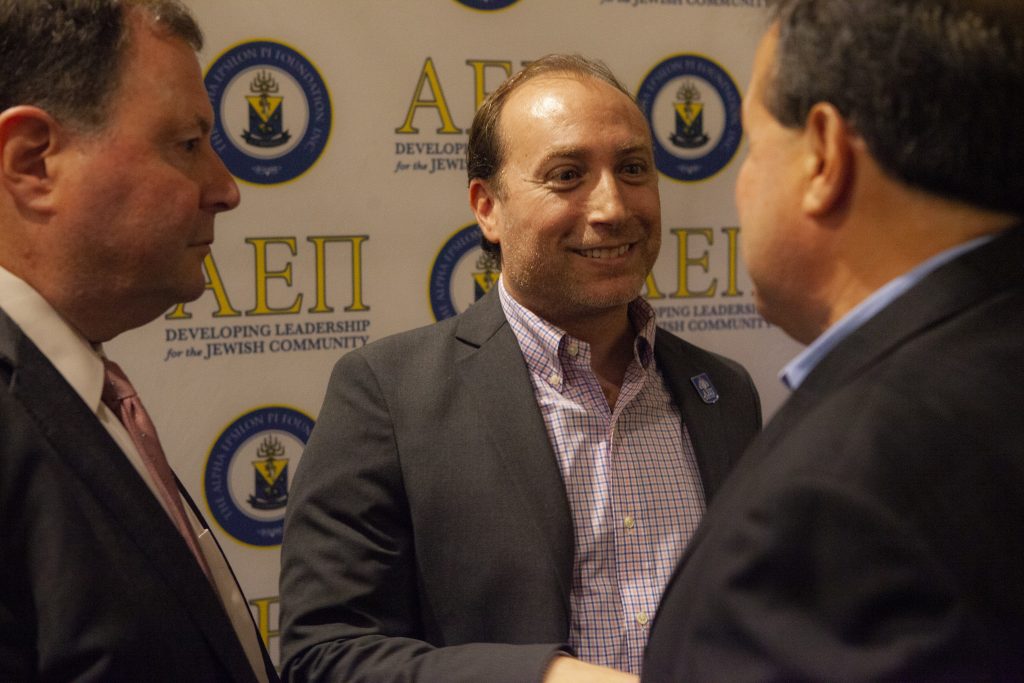 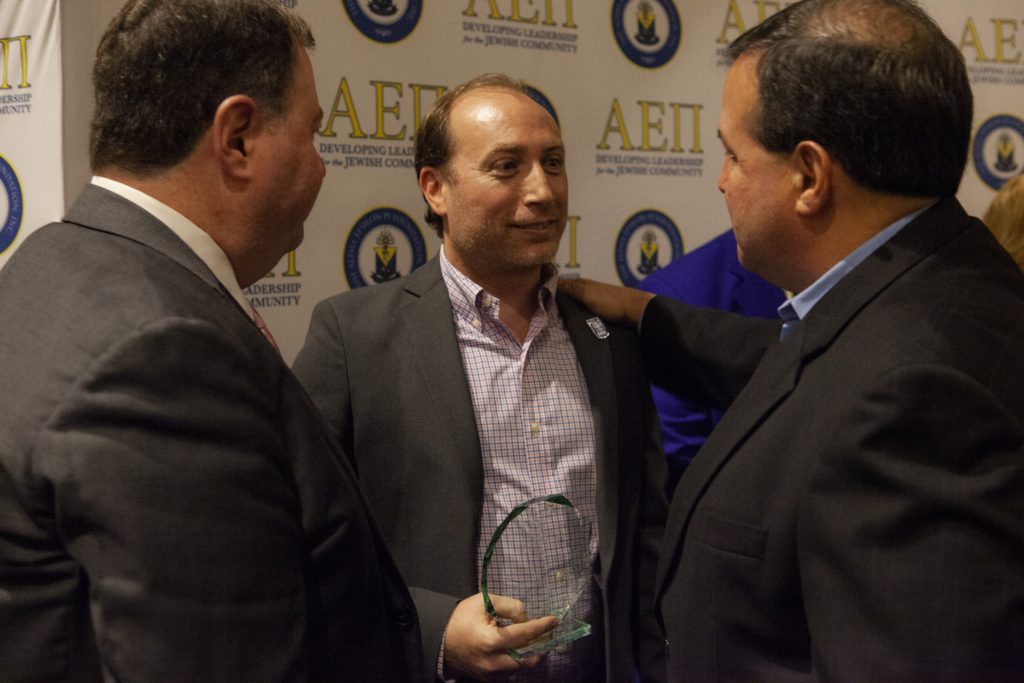 Try as you may to protect your children from harm’s reach, no one can prepare you for the phrase: “Your child is dying.” Your life stops instantly at the news, your heart starts pounding and the worry sets in. There’s no stopping the train that is tumultuously spinning out of control from here on out. Your world is shattered. How do you even handle this information? All it took was that phrase from a doctor to completely alter my family’s life. The truth is, our life wasn’t really normal from the moment my son, Jordan Ogman, was born.

No more than minutes after he was born and set in our arms, Jordan had to be taken to the NICU for a pulmonary issue and collapsed lung. From the first week of his life, he was a fighter. We couldn’t touch or hold him while he was there, but the doctors assured us that some babies just have distress when they are born. Before we knew it, he was home and healthy. Four years later, he had a fever that spiked to 104 and was in the PICU hooked up to machines for another two weeks. Again, we were told that it was probably just a cold. We knew in our hearts that something wasn’t quite right, but it wasn’t like Stacey or I had medical backgrounds, so we took their word for it. Jordan just wasn’t hitting the milestones that his older sister, Kira, had at her age. Physicians told us that children develop at different paces and we needed to trust that he would catch up. Soon, Jordan’s milestones became “inchstones.” That’s when we knew we had to seek out an answer. In September 2019, we received a diagnosis from the University of Miami.

A neurogeneticist there told us Jordan was suffering from a fatal, progressive Jewish genetic disease called TECPR2. We sought a second opinion from world-renowned doctors in Boston only to confirm that Jordan was one of ten other people in the world diagnosed with this disease, and there is no treatment or cure. Those diagnosed live to be between ages five and seven. Five and seven? Jordan was already four, so we knew we were truly in a race against time. We may have been devastated by the news, but we were thankful to finally know what was wrong. The doctors basically told us to give up all hope, that he only had another 18-24 months to live, and that we should prepare for end of life care. Imagine being told that you have to let your child die. How can you expect a parent to just sit back and let that happen? In moment’s like these, you go into a fight or flight mode. I chose to fight and immediately went back to my hotel room, making calls to 100 different universities, scientists and researchers across the globe.

Coincidentally, my alma mater, the University of Florida, called us back to tell me they have a world class gene therapy lab and cutting-edge institution focused on curing rare diseases. They encouraged us to leave Boston immediately and head to Gainesville, where we spoke with Dr. Barry Byrne who is an MD, Ph.D. and Director of the Powell Gene Therapy Center. While other doctors saw Jordan’s situation as hopeless, Dr. Byrne saw an obligation to do everything they could to study his disease in order to develop a potentially lifesaving gene therapy for him before it was too late. The only catch? It would take about $2.5 million to fund the research that will hopefully find a cure. While it may seem improbable to raise this, we’re hoping to make the impossible possible. Every day we wake up not knowing if it’s going to be Jordan’s last. From what the doctors have explained, he’ll go downhill almost immediately. It’s beyond frightening to think about how other kids with Jordan’s disease have died a horrible death. Time and time again, people ask me how I do it. My response is, “How can I not”? It’s my job and responsibility as a parent to be there for my kid, as hard as it may be on me. Having a support system like AEPi has definitely helped, though.

I remember after Jordan was diagnosed when we were in Boston, the doctors offered to bring in Make-A-Wish. Their idea of granting a wish to my four-year-old was letting him meet Tom Brady at the Patriots stadium or allowing him to throw out the first pitch at a Yankees game. They wanted to know what my one wish would be for Jordan while he was still alive and on this earth. As simple as it may sound, my only wish in life was to one day attend Jordan’s initiation as a Brother of AEPi at whatever university he chose. While meeting Tom Brady would be nice, Tom wasn’t a hero to me. Jordan is my hero, he’s the one who’s out there fighting for his life every day. In my opinion, there’d be no greater honor than being able to call him my Brother as well as my son. Of course, Make-A-Wish couldn’t help me with that.

It just so happened that I was being honored in December at a fraternity gala event in South Florida. AEPi Foundation CEO Andy Borans (Florida State, 1980) and Jay Feldman (Central Florida, 2003) asked me what I wanted to talk about when I got to the stage. Again, I was caught up in the idea about how my son is a hero to me. I didn’t want to talk about myself and my accomplishments, I wanted to talk about him and his disease. After telling Andy and Jay this, I was in awe to hear that they were willing to honorarily initiate Jordan at the dinner. Talk about brotherhood being there for you through thick or thin, they made my wish come true. It really puts things into perspective for you about who your true heroes are. It’s not the athletes, actors or songwriters. It’s the kids like Jordan fighting for their life every day. It’s the doctors and researchers who work tirelessly for hours each day to find cures. It’s a network like AEPi that drops everything to be there for you when you need it. These people are my heroes now.

My wife knows I light up whenever I talk about the fraternity, but she never really understood why I was so passionate about AEPi because she was never in Greek life herself. I joined because of the tremendous alumni network we have, which has proved to be more than helpful over the last few months. Since making the initial announcement about Jordan’s diagnosis on Facebook and asking for whatever help I could get, I’ve had Brothers like Senator Kevin Rader (Boston, 1990) offer to advocate for more funding to help families like me. I’ve been introduced to other state and local representatives because of Brothers in the fraternity. It seems everywhere I go, a Brother is willing to donate or introduce me to someone they know. The support from the Jewish community has been more than overwhelming. We’ve had donations from the United Kingdom all the way to Chabad in Hawaii. They’re not just reaching out to be nosy and say they’re sorry, but because they wholeheartedly want to know what we need. I’m amazed by how they’ve opened their hearts to Jordan’s story.

I think my wife truly understood my love for the fraternity on the night Jordan was initiated at the South Florida Gala. That night, there were more than one hundred people sitting in the audience crying as I told them about our journey over the last few months. After, everyone came up to speak with us and it was in that moment where she saw the impact AEPi has the way I do.

Right now, it’s a waiting game on treatment or a cure with the University of Florida. Each day, I continue to reach out to doctors as well as venture capitalist and private equity funds that work with companies in biotechnology. I hold out hope because I have to. There could be a drug out there in someone’s pipeline that needs to be FDA approved, or a clinical trial we don’t know about yet. I just can’t understand why it should cost my family $2.5 million to find a cure for our little boy’s life. How is that fair?

Jordan continues to be a fighter. He wakes up a happy kid and spends his days in physical, occupational and speech therapy. He doesn’t get to go to school or take a vacation to Disney World like other kids. If we let him play on a playground, we have to put gloves on him as well as wipe down everything with sanitizer and Clorox because of his compromised immune system. We do this, though, to give him a more normal life. He doesn’t know his brain isn’t functioning properly. He has no idea what’s going on with him or that the clock is ticking to save him. That’s why it’s up to us to give him the fighting chance he deserves.

At the end of the day, I know there are enough connections out there to get us the funding we need for Jordan. At this point, it’s a game of Jewish geography and who we know. I guarantee there are no other fraternities in the world with an alumni network like AEPi’s. There may be “cooler” fraternities when you rush in college, but after the parties are over there’s no greater network like ours. It’s so hard to describe the type of bond we have as a Jewish brotherhood that explaining it nearly brings me to tears. I’ll never forget the moment I got to shake my son’s hand, pin him and welcome him as a Brother of AEPi. So, thank you, AEPi, for giving me a small sliver of joy in the vast amount of despair we’ve dealt with.

You can stay up-to-date on Jordan and his journey through our GoFundMe page.