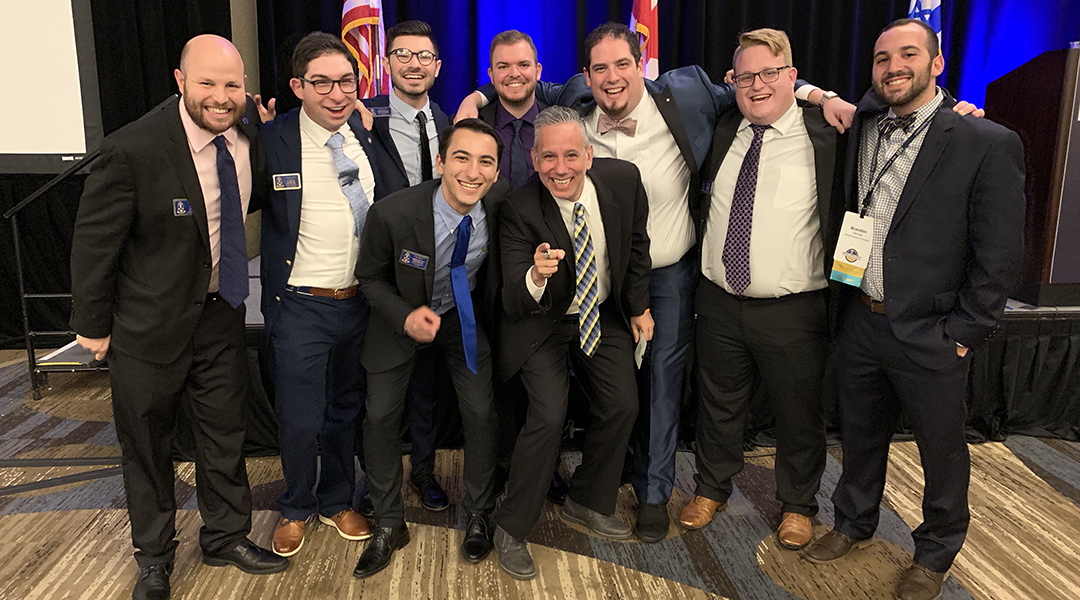 They call the chapter every two weeks. They help chapters submit grants. They will occasionally come to help with recruitment. They are the Jewish Programming Associates (JPAs) of AEPi. When chapters need programming support, the JPAs are always a phone call away.

The work they do is what makes AEPi a Jewish fraternity. For this week’s special #FridayPiday, we interviewed each associate to let you put a face to the voice on the phone and hear their stories.

Hailing from Anaheim, California, Brother Sebastian Feldman (California State – Fullerton, 2019) attended the University of California, Los Angeles and was a member of the Chi Phi chapter at California State University, Fullerton. Brother Feldman held the positions of scribe, new member educator, brotherhood chair, as well as the Israel engagement chair and alumni chair for all four years. His wide range of experience made him a powerful candidate for the AEPi Undergraduate Cabinet which he served on for the 2018-2019 academic year.

Although Brother Feldman was involved with his synagogue throughout his youth, he struggled to define what Judaism meant to him. Joining AEPi gave him a foundation upon which to build his own Jewish identity. “I was able to broaden my definition and feel connected to my Brothers through our shared experiences,” he said. “Although they used to be complete strangers, AEPi allowed me to feel right at home.” At the chapter’s 10th year anniversary gala, chapter alumni saw the impact of their involvement and dedication as undergraduates, which Brother Feldman will never forget.

The impact that AEPi had is what inspired Brother Feldman to work for the fraternity. “I wanted to give back to the organization which has helped me substantially,” Brother Feldman said. “I learned social and leadership skills, which I want to pass on to our current undergraduates. I want to help develop them into leaders for the Jewish community.”

Brother Brandon Harnick (Georgia Southern, 2019) brought his Southern charm to Indiana when he joined AEPi’s International Staff. Originally from New Orleans, Louisiana, he moved to Marietta, Georgia at six years old and lived there until moving to Indiana to begin working for AEPi. A self-proclaimed sports fanatic, he will spend his time playing Madden or NBA 2K, watching sports or playing sports whenever he can.

While Brother Harnick attended some BBYO and USY events in high school, he decided they just weren’t for him. He gained a stronger appreciation for being Jewish upon going to Georgia Southern, a school with relatively few Jewish students. This influenced his decision to join AEPi, since it “made me appreciate any bit of Judaism you can get.” Brother Harnick recalls wanting to buy matzah around Passover time, and no one in town even knew what matzah was.

Brother Harnick is ready to give this job his all. “My goal is to make all the Brothers I work with have the best AEPi experience they can have,” he says. He knew that he was going to miss AEPi coming out of college and wanted to continue his AEPi experience. “I accepted the position and it was one of the best decisions I’ve ever made.

If you need help submitting a grant or nailing a Guitar Hero track, talk to Brother Jonathan Handler (UC Riverside, 2019). Born and raised in Los Angeles, Brother Handler attended University of California, Riverside where he was the scribe, lieutenant master, and master of the Chi Rho chapter.

Having been involved with United Synagogue Youth (USY) during high school, Brother Handler was naturally attracted to AEPi. Being a Brother connected him more with Jewish culture, and instilled a sense of pride in Judaism on a campus with relatively few Jewish students. He is grateful for the opportunities AEPi gave him to not only grow as an individual, but to help his entire chapter grow from the ground up. Coming out of a membership review during his freshman year, Brother Handler chose to view the situation as a learning experience and push the chapter to greater heights. Brother Handler received the Nehemiah Gitelson Bronze Medallion at AEPi’s 104th convention in Las Vegas. In 2018, the Chi Rho chapter was named the most improved chapter in AEPi.

Brother Handler’s hope is that he’s able to impact the lives of undergraduates the same way AEPi impacted his life. “I hope to leave my position with AEPi International Headquarters better than when I arrived,” he said. “I want more chapters to be aware of the work we do as Jewish Programming Associates. I want them to understand how much of an asset we are for them.”

An Illinois native, Brother Ethan Shemoney (Illinois State, 2019) attended Illinois State University, where he was a Brother of the Iota Beta chapter. During his time at the chapter, he held the roles of master, lieutenant master, and social chair. Joining AEPi challenged Brother Shemoney in the best way possible. “I studied education as an undergraduate,” he said. “AEPi is the perfect combination of education, Greek life and the Jewish non-profit world all rolled into one.”

Brother Shemoney will always remember going to AEPi’s 105th convention in Phoenix, AZ. Not only was it his first convention but it was also when his chapter was granted their charter. He mostly enjoyed the opportunities to meet other Brothers and discuss interests, such as his own love of film and sushi—and past experience as a sushi chef.

Membership in AEPi inspired Brother Shemoney to be more involved in the Jewish community, and truly sees his Brothers as family. “To me, family is more than blood,” he said. “It’s the people that you trust, and that bond lasts a lifetime.” In the coming year, Brother Shemoney hopes to be a support system for his AEPi family, and is looking forward to the challenges of the process. Having spent most of his life in the Chicagoland suburbs, he is also excited to travel outside his comfort zone and help his Brothers grow however he can.

Born, raised and educated in Delaware, Brother Ethan White (Delaware, 2018) is entering his second year on the AEPi International Staff. He attended the University of Delaware, where he was the founding exchequer, rush chair and Israel engagement chair of the Rho Deuteron chapter.

One of Brother White’s formative experiences, both in college and in life, was being a founding father of an AEPi chapter. “One of my best memories is getting the call from Grant Bigman asking to be a founding father,” he said. “I love that AEPi does Jewish programming in its own way. You have a very unique way to experience Judaism.”

In the coming year, Ethan hopes to visit as many chapters as possible all over the world. While some of his favorite parts of the job are meeting people and traveling, he also enjoys having a social community to lean on. As a video game aficionado, he also looks forward to friendly competition during chapter visits. “I love playing anything from Smash Bros. to 2K to Overwatch. If you guys ever want to play, let me know!”

Thank you to all of these Brothers for their dedication to AEPi and their hard work to make each and every one of our chapters better. Best of luck this year!