FridayPiday: Meet the Supreme Board 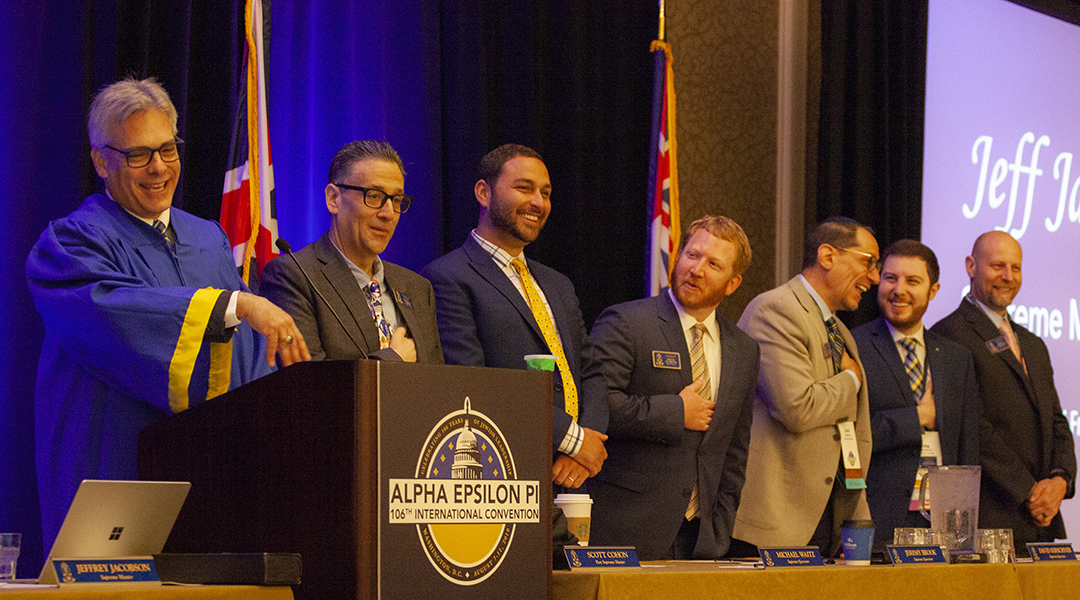 This is a special FridayPiday to briefly introduce our undergraduates and alumni to the Brothers who make up the Supreme Board of Governors, the volunteer leaders of our fraternity. At AEPi’s International Convention earlier this month, these men took the oaths of their office to commit to helping set the strategic direction for AEPi.

The members of the Supreme Board of Governors are:

We hope this short “virtual roundtable” gives you a sense of who they are and why they give so much of their time and lives to AEPi.

PSM Cohon:  I had a significant anti-Semitic incident occur (in my freshman year) when a swastika was carved into my dorm room door. I searched for fellow Jewish students and several high school friends had pledged AEPi. I wanted to feel comfortable again.

SM Jacobson:  I used to hang out in the Kosher Kafe at Queens College in NY and met some of the Brothers. I remember seeing the menorah on the COFA and thinking that AEPi seemed to be a natural extension of the experience I had in USY, mixing social events with my Jewish identity.

SG Weinhaus:  I grew up in Livonia, Michigan, a suburb of Detroit. Livonia was a bedroom community, hardworking and humble, but had no Jewish life or Jewish identity. No BBYO, No USY. No Temple. I was the only Jew in the entire school system until 11th grade and experienced what it was like to be the “Jewish Kid”. Good or bad, I did not want to repeat that experience in college.

SS Cohen:  When I arrived at UGA, I knew I wanted to join a fraternity and rushed different houses throughout the summer.  AEPi just felt right. The level of comfort, camaraderie, fun, and excitement I felt was unmatched. I have Supreme Governor Jeremy Brook to thank for that experience because he was on the rush committee and I was his rushee.

SSC Knapp:  Because I valued my Judaism, and while I was 1,000 miles from home, I knew that being around other Jews would keep me grounded.

SG Waitz:  I was given the opportunity to be a Founding Father as a freshmen and thought it would look good on my resume. After I received my bid from SG Jeremy Brook, I told him let me think about it. I called my dad once I left the meeting and he told me it is a no brainer and that I need to do it

SG Rosenberg:  I almost didn’t (join AEPi). I knew that I wanted to join a Jewish fraternity, but all of my high school friends from BBYO were joining (another fraternity), and for a while that’s where I thought I should be as well. Thankfully, I’m living proof that rush really works, and after talking with some of the Brothers and experiencing the strength of the Brotherhood firsthand, I knew that I had found a home away from home in Omicron (chapter).

SG Brook:  Going to UGA, where Greek life is prominent, I knew I would join a fraternity, but at first, I didn’t know if I would join a Jewish fraternity. But at the end of the day, when you’re Jewish at a large, Southern, state school, you have the choice between the fraternity in which you have to explain why you’re eating pizza on a giant cracker for the sixth day in a row while everyone else is enjoying their Easter dinners, or the one in which you can just complain to each other about how tired you are of eating matzah. I chose the latter because when it came down to it, I wanted to be around other guys like me.

Q:        What were the one or two lessons/skills you got from your undergraduate experience that, in hindsight, have been most valuable?

SG Rosenberg:  1) Understanding that the most popular decision is not necessarily the best one. If something doesn’t feel right to you, it’s probably not. 2) You can’t please everyone.

SME Oshins:  Leadership and perseverance. When you’re a founding master of a colony and the university doesn’t want you there you have to persevere. A lot of people don’t stick to it. If you believe in something – if you believe that there should be a Jewish fraternity – you persevere. We didn’t take no for an answer.

SG Waitz:  1). The leadership experience you get from holding a position and specifically master will help you down the road as you become a working professional. 2). Attend as many AEPi events, conventions, conclaves, other meetings, the brothers and connections you make are priceless

SS Cohen:  Lots of people talk about leadership development and what it means to be a leader. The reality is, you have to practice leadership and AEPi could not have been a better environment for that task. I served as Exchequer, Rush Chairman, and Master. Each of these roles presented unique experiences and challenged me to develop new skills in order to be successful. Most folks don’t have access to this type of learning laboratory and for that AEPi brothers truly have a special opportunity.

SG Weinhaus:  Adversity comes in many forms and from many places but character, honor and perseverance come from one: You and you only. Just because you are the loudest in the room, doesn’t make you right. Listen to others, show respect and it will come back in ways you did not expect.

SG Kirschner:  Being comfortable out of my comfort zone, leading by knowing when to let others lead, decision-making clarity and diplomacy.

SE Farbman: Don’t sweat the small stuff. People matter. Goals matter. Everything else will be forgotten.

Q:        What is your favorite part about being an AEPi volunteer?

SM Jacobson:  Seeing the undergraduate Brothers who I worked with as a chapter advisor graduate, start their professional lives, get married, have children, and start their own journey as AEPi volunteers. That’s the good stuff.

SG Kirschner: Maintaining a strong connection with the undergraduates. There’s nothing better than the experience of serving as an advisor. And, an effective advisor is worth their weight in gold (and blue)! From a board service perspective, though, it’s establishing policies that place our undergraduates in the best position to thrive.

SG Weinhaus: Engaging with multiple generations of AEPi Brothers and hearing their stories.

SG Brook:  I worked as an ELC. After you work for the fraternity, it’s hard to just quit cold turkey. I went back to UGA for law school and got involved as an advisor for the chapter. When I moved to Nashville, I stayed involved as an advisor for Vanderbilt, and then as a Regional Governor. It’s always been rewarding for me to serve an organization that benefited me in so many lasting ways and that continues to better the lives of thousands of college students and build the leadership of the Jewish community.

SME Oshins:  The natural engagement and the ability to interact with so many other people. My AEPi experiences have helped me and I want to give back. My parents always taught me to give back. That this is what we do. I try to honor them by giving back to the fraternity which has given me so much.

SS Cohen: Relationships.  The bottom line is that life is all about relationships and I love serving alongside my best friends as volunteers and I love meeting new AEPis. I hope everyone has the positive experience I have had in AEPi and I want to work every day to create an environment where that is achieved.

SE Farbman:  Working with such incredible Brothers on the SBG and interacting with undergraduates to continually improve the AEPi experience.

SSC Knapp:  Continuing to meet other leaders. When you surround yourself with the best, you become even better.

SM Jacobson:  The more I put into AEPi, the more I get out of it. AEPi is like this never-ending fountain of relationships and experiences that allows me to grow and evolve, to be the best version of myself – even when I’m not.

SG Brook:  My parents did a great job of instilling in me a sense of Jewish identity. But they were not especially involved in Jewish leadership. I truly learned the value of being involved in leadership in the Jewish community from AEPi, and that is a part of my life that is extremely fulfilling.

SG Waitz:  It helped me get my first job out of college, then helped me land my next job, I met my wife while working in Indianapolis, and continues to help with business connections for work every day. It continues to give to me which is why it is important for me to continue to give back.

SG Rosenberg:  The sense of Brotherhood. I am an only child, so the relationships that I have developed with AEPi Brothers all over the world are some of the most important in my life. I met my wife through a fellow Omicron brother, and I still stay in touch with my pledge class regularly…You don’t find friendships like that often, but AEPi has a way of making them happen.

SE Farbman:  AEPi has given me my closest friends and enriched my Jewish identity in ways I can never repay.

SME Oshins:  Its humbling that young Jewish men are willing to stand up and be leaders and fight for the advancement of our people, that they are willing to take the risk. I refined that in AEPi. I learned in college that we need to fight to exist and I’m still fighting.

SSC Knapp:  I have a tremendous network of friends, Brothers, and people I can call on when I need something done, when I need comfort, or when I want to just enjoy life.

SS Cohen: I think AEPi has influenced almost everything about who I am.

SG Kirschner:  Simply put: I’d have never developed into the person I am today, personally, professionally or communally. No further explanation needed.