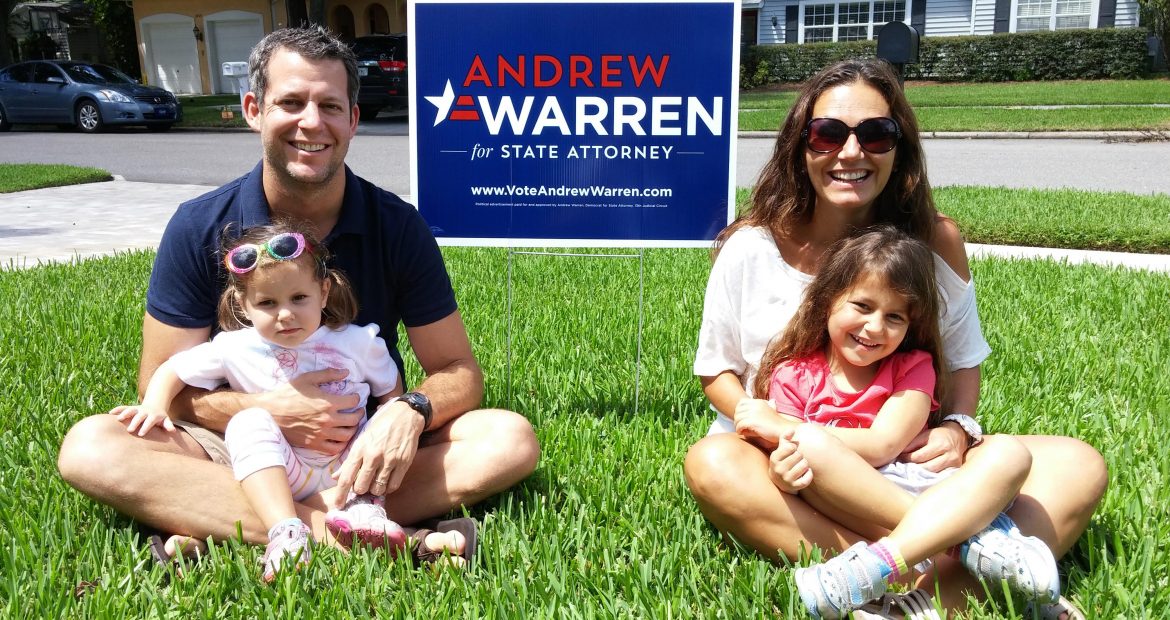 Nothing is more important to Brother Andrew Warren (Brandeis, 1999) than creating a safer community for his family. Born and raised in Florida, he is happy to serve as State Attorney of the state’s 13th Judicial Circuit, Hillsborough County. Tampa is the largest city in the county, with about 1.4 million people to serve. Brother Warren was sworn in on January 3, 2017. He oversees an office of 130 prosecutors and 300 staff whose mission is to protect the residents of Hillsborough County and ensure a fair and impartial application of the law to those in our criminal justice system. His office handles approximately 75,000 cases per year, ranging from traffic offenses to murder cases.

“I get to be almost like a company CEO, overseeing how we make our community more safe during my four-year term. I wanted to work in public service in the community my children were growing up so I could shape the policy their generation would deal with. There were problems with the criminal justice system and the country was talking about these issues. I wanted to be a leading voice, not just standing aside.”

To become State Attorney, Brother Warren had to quit his dream job as a federal prosecutor with the United States Department of Justice in Tampa, FL, and Washington, DC. Federal employees aren’t allowed to run for office. As federal prosecutor, he spent a majority of his career prosecuting complex white-collar crime, including investment fraud, Medicare fraud and corporate corruption. “I was fortunate enough to be one of the attorneys who prosecuted Allen Stanford and others at Stanford Financial Group for orchestrating a $7 billion Ponzi scheme that was the second-largest in this country’s history.”

He started to campaign in January 2016 with the election in November. “I worked my tail off for more than ten months to achieve this goal. I shared my vision of criminal justice reform with voters, met with people, raised money and did everything I could to win. Running against a 15-year incumbent was difficult, but we pulled through.” Once in office, he was able to work on creating a smarter and more effective system that increased fairness, safety and justice to all citizens of Hillsborough County. “We’re making sure we’re tough on criminals who pose the greatest threat, those that are violent and serious repeat offenders. But we’re also looking for smart alternatives for our low-level and non-violent offenders. The last thing we want is to perpetuate crime and waste resources.”

He believes his experience at Brandeis and in the Lambda Beta chapter of AEPi helped balance things in his life. “I was president of the Fraternity and dealt with school administration. I learned lessons about dealing with bureaucracy and government early on because of this. The position I’m in now requires a lot of judgment and discretion, all of which I would not have without my academic background and AEPi.” He felt Brandeis was an excellent school to celebrate and embrace his Jewish roots. Whether it was the High Holidays or Friday night services, Jewish life is intertwined with the university. “I grew up in a typical conservative Jewish family. The lesson of Tikkun Olam and giving back to the world resonates with me even now in my career. It’s hard to separate that from my professional life so I can thank my parents for instilling those values in me early on.”

Brother Warren is committed to the health and safety of the community. He’s implemented several new policies since taking office and looks to continue focusing on creating a place where his children are safe to grow up. It all comes back to balance for him, he worked hard in college and law school to get to where he is as a professional. While he was serious about his work, he knew when to sit back and enjoy things in his personal life.

“It’s rewarding to know that I’m doing everything I can to make my community more safe, which makes my neighborhood more safe and then makes my family more safe. It’s a challenge to deal with victims who have died and their next of kin. I find this hard because there is nothing we can do in the criminal justice system to bring back their loved ones or erase the memory of being a victim. I want to be able to do as much as I can to hold the offenders accountable.”