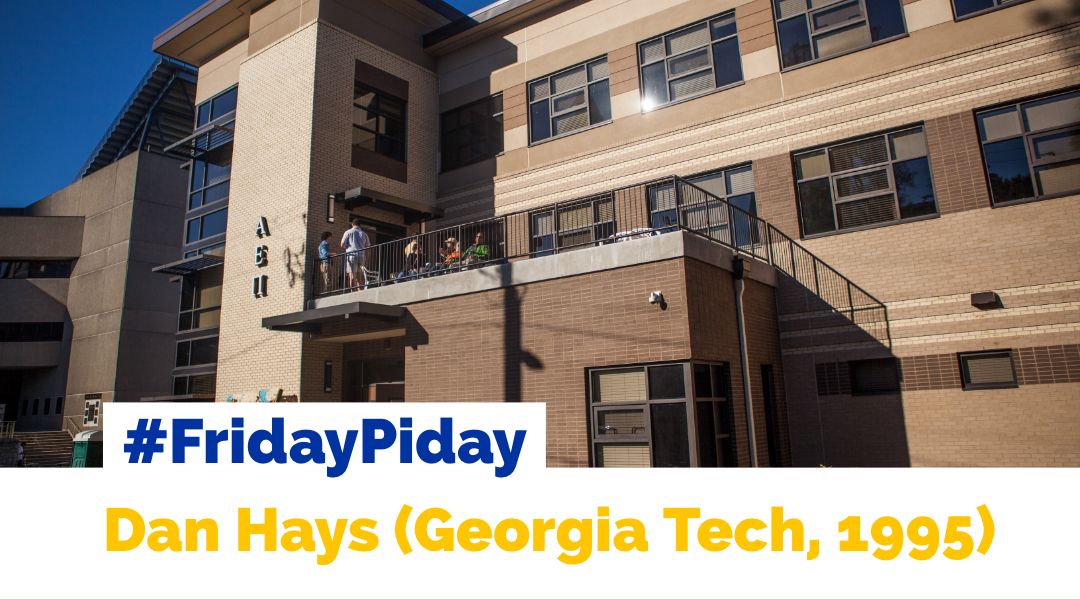 The AEPi Zeta house at Georgia Tech was always a home away from home for Brother Dan Hays (Georgia Tech, 1995). Not only did it have a major impact on his college career, but it was also a place where people who had Judaism in common could spend time together. “Having this opportunity was tremendous. AEPi truly opened the door in terms of leadership opportunities, I had a chance to play a role in something bigger than myself.” Brothers at Georgia Tech have called Zeta home since 1920 when it was opened. The chapter house was originally built in 1956 and was re-built in the 1970s after partially burning down. Last weekend, Brothers from all generations of Zeta gathered to celebrate the new Zeta house opening at 714 Techwood Drive. Brother Hays was proud to be a part of the planning process that pulled off this state-of-the-art building.

“There are so many things about the new Zeta house that make it unique and more advanced than it’s been in decades. I’m happy this project got me involved with the fraternity again, it motivated me to have a better appreciation of the amazing things AEPi is doing.”

Brother Hays volunteered for the Fraternity as an advisor and served as an assistant regional governor before eventually joining the AEPi Foundation Board of Directors in 2015. Today, he is the Foundation Vice Chairman. “The Zeta project has been a concept for years, but it took time to organize and raise the funds. There were dozens of alumni who worked together to make this happen.” There were committees to look into architects and ones to decide on construction firms. There was even a committee to focus on fundraising. The fundraising goal was surpassed and totaled more than $1.3 million. Brother Hays hopes to continue fundraising and pass $1.5 million. “It’s been a remarkably successful project. I loved being able to reconnect with brothers I hadn’t seen in more than 20 years. While it was sad to say goodbye to the old house, the new one that sits in the same spot is one of the best spots on campus.” Zeta house is a mere 50 feet from the football stadium and is prime property that AEPi owns, whereas many fraternities and sororities on campus are housed on land owned by the school. “We wanted to preserve this location.”

As a partner for PricewaterhouseCoopers (PwC), he finds a few similarities between what he learned in the chapter and his career. “AEPi really taught me how to lead people despite differences. We don’t always agree with one another, so being able to work through those differences is something I continue to utilize in my professional life.” At PwC, he helps executives define and evolve their strategies and make a change happen within their own organizations.

As a member of the Foundation board, Brother Hays finds himself in awe of what AEPi has to offer undergraduate and alumni Brothers now in comparison to when he was at Georgia Tech. “There’s such a focus on leadership development and Israel advocacy and the programming is light-years ahead of what we had. I enjoy supporting this and want to ensure we can continue to offer this for members in the years to come.” He noted that due to the Zeta campaign, three chapter alumni have also joined the Foundation board. He hopes that they can take what they learned from the Zeta campaign approach and apply it to other chapters when raising funds for houses. “I think people don’t realize that many chapters don’t have housing. We want to not only upgrade housing for chapters, but provide chapter housing for those that have never had the opportunity.”

While touring the new house, he noticed an art deco sign from the old house that was preserved and installed. There was also a beautiful coat of arms designed and constructed by Brother Richard Waldorf (Georgia Tech, 1967) that was hanging in the new lounge. “I think one of the most awe-inspiring installments was an interactive kiosk display monitor that is composed of more than 70 years worth of composites. Richard had them digitized so you can look through them and find any information about a brother who has been in the chapter.”

Everyone was impressed by the hard work of Esponda staff and the AEPi Foundation and Brother Hays hopes this is only the beginning. “We want this to be an inspiration to other chapters and alumni to do something similar. We have many opportunities for alumni to give back and build a foundation for the future of their chapters. If you want to know how, just reach out. Zeta’s project saw many alumni renew their commitment to the Fraternity and donate their time to programs we support. It’s good to see AEPi Brothers have a better understanding and appreciation of what happens behind the scenes.”

“None of this would have happened without the support of Brothers and their families, especially spouses. Everyone was incredibly helpful with the project and we are proud of the results.”

Cheers to many more years and memories in the new house. Take a look at photos from the Zeta house-opening event.