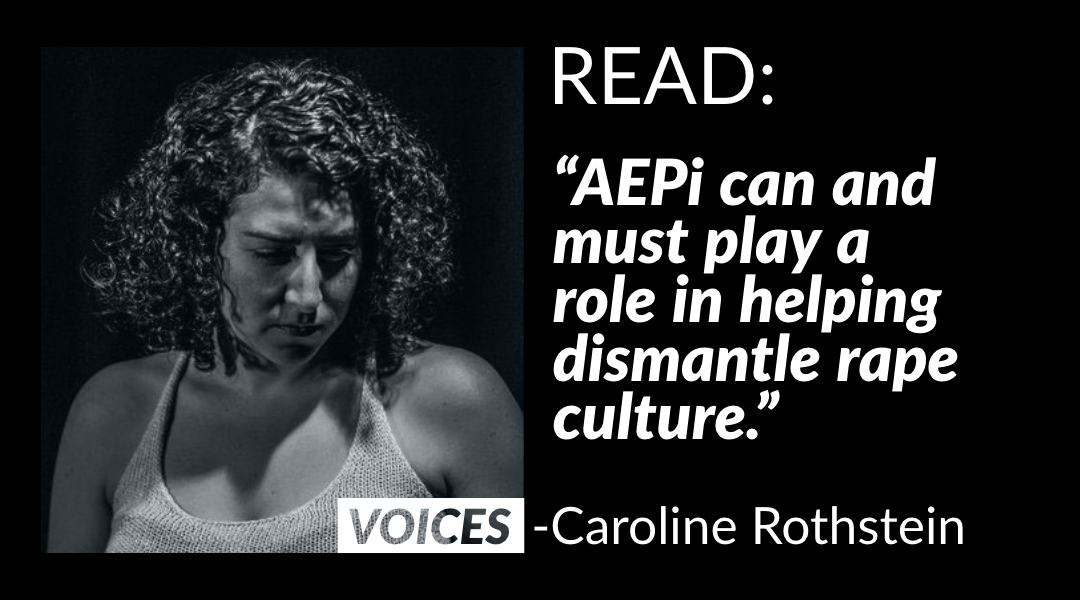 I imagine it is a complicated time to be in a fraternity. The entire fraternity system is on trial instead of the mere individuals, who have committed egregious acts. And yet, their behavior seems to end up reflecting on entire schools, entire fraternities, and masculinity at large. This is neither right, nor wrong. It simply is. Which is why I feel strongly, given the current climate around sexual assault in our media and world at large, that it has never been a more important time to be in a fraternity. I feel strongly that AEPi can and must play a role in helping dismantle rape culture and end sexual assault both internally, and as role models for the world.

This past August, I had the profound opportunity to perform and speak at AEPi’s 105th International Convention. Throughout the course of three days, I co-facilitated a session on sexual assault prevention with Rabbi Stan Davids for the Tikkun Olam conference; I shared my spoken word poetry about my experiences with sexual assault, sex, and consent, along with a talk back and Q&A, to a packed room of over 150 brothers, chief delegates from all over the world; and I led an intimate break-out session about sexual assault prevention, incorporating discussion and sharing from those attendance. All week long, AEPi brothers’ engagement blew me away.

In each of my sessions, I shared my story—how I was sexually abused for a year and a half in high school by a peer—a “nice Jewish boy,” who was otherwise seen as a pillar of perfection by parents, teachers, and friends alike; and how I was raped my first month of college at the University of Pennsylvania by a stranger, who was in town from another school visiting friends.

“We need you. Not only women. You are your brother’s keepers. You need each other too.”

I have been sharing my story as an outspoken survivor since my freshman year at Penn, and I began working with fraternities around sexual assault prevention and response work my senior year, having spent most of college actively involved in campus activism around sexual assault prevention and response. Now, having spent my career as an internationally touring spoken word poet, journalist, and educator, sharing my story as a survivor—as well as topics around eating disorder recovery, body image, mental health, grief and loss, identity, gender, sexuality, Judaism, and more—I’ve long dreamed of reengaging with fraternities in a direct and dynamic way.

I feel strongly that male-identified college students, especially campus leaders, can have a lasting impact on creating seismic and systemic change. I know the brothers of the world’s Jewish fraternity can yield astonishing commitments to long-lasting results around dismantling rape culture and creating communities built around consent. I know this is a legacy AEPi can have.

We need you. Not only women. You are your brother’s keepers. You need each other too.

As we head into the Jewish New Year of 5779 and I reflect on my work this past summer with AEPi, I keep thinking of L’Dor Va’Dor, from generation to generation. We typically think about L’Dor Va’Dor as a means of continuity, quite literally creating new generations whereby we preserve our rituals, traditions, and texts. I feel like L’Dor Va’Dor is bigger than that. What if you are the generation of young, Jewish, male-identified leaders, who help create the systemic change that prevents and eliminates rape, harassment, and sexual assault? What if you are the generation that eliminates toxic masculinity and passes down a culture of consent?

I know it’s possible. I saw you plant the seeds at convention. And I would be honored to continue working with AEPi as this monumental and transformative shift takes into effect.

Shanah Tovah, and thank you all.

Caroline Rothstein is a New York City-based internationally touring and award-winning writer, poet, performer, and educator. She has been performing spoken word poetry, public speaking, facilitating workshops and teaching at colleges, schools, and performance venues for over a decade. Her work has appeared in Cosmopolitan, Marie Claire, BuzzFeed, NYLON, Narratively, The Forward, Kveller, and elsewhere. Caroline and her work have been featured widely including in The New Yorker, MTV News, Chicago Tribune, CBS Evening News, BuzzFeed News, The Huffington Post, Mic, and Newsweek, and was called a “very inspiring woman” by Lady Gaga.

Dearest @AEPi: I have no words. It was an opportunity of a lifetime to speak with your brothers about sexual assault prevention. I am humbled & awed by your leaders. Thank you, from the bottom of my ❤️, for having me here at #AEPi105. This is how tikkun olam works.