“We have to be a campus of love”: Towson AEPi Hosts Rally to Combat Hate 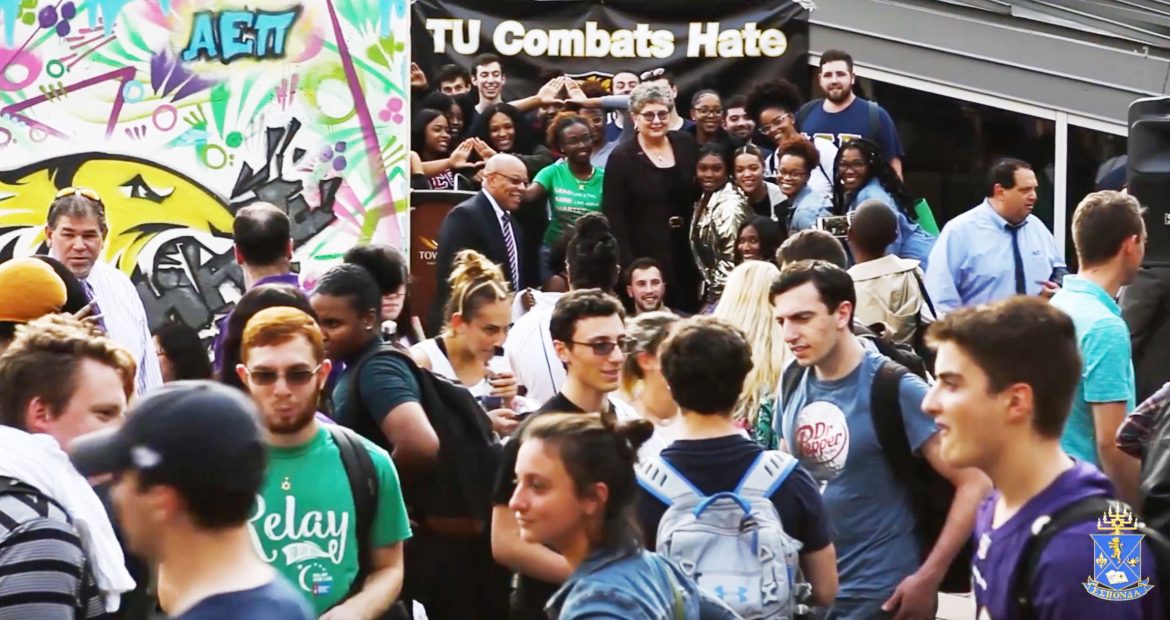 Following anti-Semitic attacks in April committed against two brothers of our fraternity, AEPi brothers at Towson University rallied with students, professors and members of the community last Thursday.

“They [brothers] were shocked, they were stunned, they could not believe that something like this would happen,” said Chapter President Joshua Leckner (Towson, 2019). “it’s what you do after the event that matters.”

The brothers of Alpha Epsilon Pi wholeheartedly agree with Brother Leckner. Ensuring action is taken after an event like this is the key to combating it. This message became the rally’s theme, empowering the hundreds of students in attendance.

“We knew that being scared and hiding who we are was the opposite of what we needed to do,” “We have to be a campus of love.” -Dean Shilo (Towson, 2018)

“We will not be silent in combating all forms of bigotry,”

“If anyone on this campus does not feel supported, it’s time we make a change,” said Kim Schatzel, president of the university, receiving snaps from brothers and applause from the crowd.

“You are all alike. You are all from the root of the same tree,” said Rev. Mitchell Mitchell Johnson. “In the event of a catastrophe, you can always tell the meat of a community by what they do next.”

A mural was painted by our good friends at Artists 4 Israel, showcasing the Towson Tiger biting into a crumbling illustration of “hate”.

Alpha Epsilon Pi stands against all forms of hate. Support the efforts of AEPi and the brothers at Towson University by sharing this article.

A special thanks to Towson Hillel, The Simon Wiesenthal Center and Artists 4 Israel.

A couple hundred students, professors, administrators and community members gathered in Towson University’s Freedom Square Thursday night in response to an attack on two Jewish brothers of the AEPi fraternity back in April. Read about the rally here: https://t.co/dBjmajIfE0 pic.twitter.com/YzUK46AVy3

Towson fraternity AEPi stepped out to speak on inclusivity and saying goodbye to hate on campus. Here's how it went down: https://t.co/IgbmiSg4mL

« As A Gay Member Of Greek Life, I’d Fight For My Brothers As Much As I Would For The LGBTQ Community
Build Better Brothers, Not Pledges »