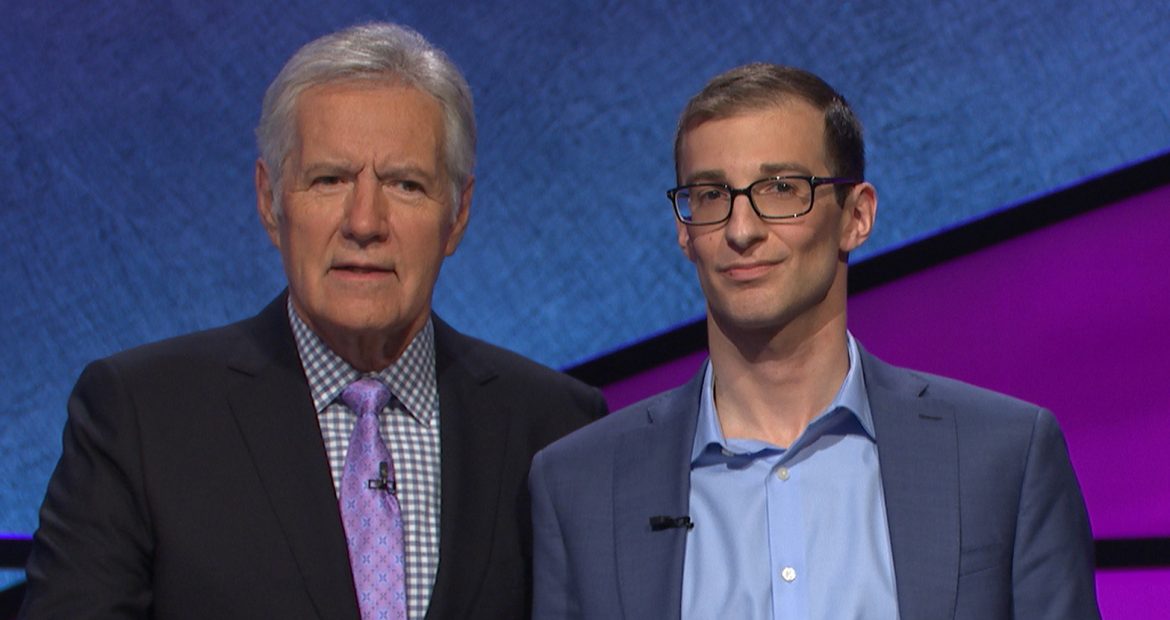 Always a fanatic for trivia, Brother Jordan Nussbaum (Guelph, 2012) was ecstatic to have the opportunity to be on the hit show, Jeopardy! In June, the one-time champion walked away with $17,800 after competing for two days in California. For Brother Nussbaum, competing was never about the prize money. In his eyes, the star of the show is the trivia itself.

“Being a part of Jeopardy! was all about the fun. I loved taking a trip out to California and meeting all of the other contestants. Everyone was so nice and I’m proud of how well I played.”

The process of getting on the show is no easy task. Anyone can take the online test, which contains 50 general knowledge questions. “It took a few years of taking that test, but I was finally contacted in October 2017.” Once he traveled to Toronto for the audition, he was given another general knowledge test. This was followed by a mini-game similar to the show. Contestants are given a buzzer and questions that they have to answer. He felt the most important part was the contestant interview portion, where each person was asked for facts about themselves. “I did my research and knew the online Jeopardy! community suggested I bring a good story that would make people laugh. While my audition went well, I wasn’t expecting to hear back from anyone.” In January, he was asked if he could make it to the February taping.

While he has always had a good memory, he credits his father for getting him into trivia. “I remember he used to quiz me on oldies songs in the car on the way to swimming lessons. After that, I was on the trivia team in high school and Quiz Bowl team in college. Quiz Bowl is the collegiate level trivia contest and I played competitively my first year.” While studying at Guelph, he was also a brother of the Eta Theta chapter. “Coming from a heavily Jewish populated suburb of Toronto, I wanted to find other Jewish students like me at school. It was the first time I wasn’t predominantly surrounded by other Jews, but the brothers made me more comfortable on campus my first year.” He now works for Romano Law Office in Toronto.

When he told his trivia team and family that he made it onto the show, everyone was elated for him. He only had four weeks to prepare, so he went to work studying in his weakest subjects. “History is my strongest suit, but I’m terrible with literature. Luckily, my aunt had three volumes of two page summaries of the classics in literature.” He read as much as he could and also studied U.S. history since many questions come from this category.

Jeopardy! films 39 days a year, five episodes a day, two days a week. “They bring you into the studio and onto the stage three at a time to practice, then the live audience trickles in and before you know it you start the game! I wasn’t nervous; I’ve been playing trivia for a while. It’s crazy how surreal the experience is. All of a sudden you’re on stage, the music is playing and you hear ‘This is Jeopardy!’ before you’re actually competing.” In between episodes, Alex spent time talking to contestants and engaging the audience.

Being in the moment on national television can leave anyone starstruck, so Brother Nussbaum doesn’t recall much of what was asked. However, he was proud of how well he did in multiple categories that weren’t his strong suit. “My strongest category in the first game was ‘The Real Game of Thrones’. I was a bit behind at that point. What saved me was answering the true ‘daily double’ correctly, that got me back in the game.” He also managed to correctly answer a hip-hop question as well as a U.S. Revolutionary War question correctly. “This was a shining moment for me. It’s interesting to see what I picked up from popular music over the years. I also felt good as a Canadian answering a difficult question about U.S. history correctly.”

“If you ever dream of being on the show, keep practicing and taking the online test even if you think you know it all. Be engaging and funny in the audition, a lot of people tell the same backstory. Seek out the experiences you enjoy and pursue them. Just remember to relax and don’t be discouraged if you don’t succeed right away!”

fridaypiday
« Jim’s Journal: Be Proud and L’Shanah Tovah
As A Gay Member Of Greek Life, I’d Fight For My Brothers As Much As I Would For The LGBTQ Community »