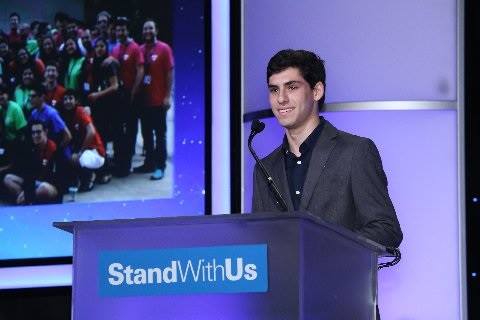 Israel advocacy has always been a passion for Brother Eliav Terk, who testified in front of the Texas Senate in March against legislation that supported the Boycott, Divestment and Sanctions (BDS) Movement. “The opportunity was my moment to show the Senate my passion and dedication to Israel.”

This wasn’t Brother Terk’s first rodeo with Israel advocacy. While in high school serving as StandWithUs’ high school intern, he filed a grievance to the Houston Independent School District over anti-Semitic incidents that were occurring. StandWithUs gave Brother Terk its legal department’s resources to ensure he was adequately represented, but “I never knew the attorney who worked my case.”

As a freshman at UT, Brother Terk attended a gathering of pro-Israel students to hear from guest speaker Charles Pulman, an attorney. Pulman discussed some of the pro bono legal work he had done for StandWithUs. “I started to realize he may have been connected to my case, and it was unforgettable when I finally confirmed he was.” They exchanged contact information and Brother Terk was invited to speak at a StandWithUs fundraiser aimed at expanding the organization in the south.

“When the BDS language was introduced into the Senate legislation, Pulman invited me as a Jewish UT student to come speak about the effects the BDS movement.” Brother Terk chose to speak from the heart and explain why Israel was so important to him and his family. “Advocacy is never ending because you will never stop anti-Israel sentiment on college campuses. You can organize events and make meaningful impact on an individual level, but the frustrating challenge is how hard it is to find tangible impact.” Testifying against this piece of legislation was an opportunity to prevent something from negatively impacting the image of Israel. “I was doing something for the place I love.”

Brother Terk grew up in a family that emphasized upholding its roots and connection to Judaism, so it came as no surprise that he chose to attend UT with its strong Jewish community and opportunities to be an Israel activist.

“AEPi encouraged me to get involved in the Jewish community in any facet possible. It defined my first year of college and forced me to step outside of my comfort zone. It’s been more than a stepping stone to launch me into my future as a young Jewish leader.”

He currently serves as the Gamma Deuteron chapter’s Israel Engagement Chair and hopes to keep Jewish students involved and engaged while realizing the significance Israel has on them.

“I am unbelievably thankful that there have never been more opportunities for Jewish students to stay engaged with their Jewish identity in college. AEPi and Israel advocacy have given me the opportunity to not only learn about myself but also to interact with Jewish students from around the country while expanding my network. Becoming a brother of AEPi has been the single most significant event of my college career thus far, and I’m looking forward to playing a growing role in the organization.”