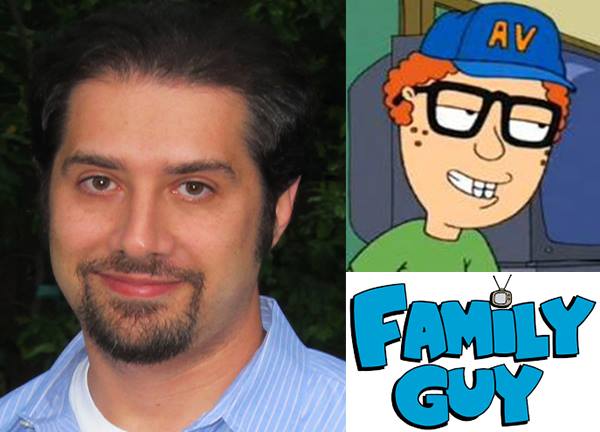 Brother Neil Goldman (Yale, 1993) may be the only AEPi with his own action figure.

And, after a successful career writing for such shows as Scrubs, News Radio, Step by Step and Community, it’s his stint writing for Family Guy nearly a decade and a half ago and his eponymous character that still brings him recognition.

“That’s my one lasting connection to Family Guy – the character and the action figure,” said Brother Goldman.

Writing television comedies isn’t where he thought his career was heading when he was enrolled at Yale. “I was a political science major at Yale – which is kind of funny because I’m like the least political person on our staff now – and I applied for this internship in LA offered by the TV Academy. I had done an internship at MTV so I had just enough experience to get in.”

“I stayed out here and got a job working for a studio executive and became a PA (production assistant) on a show called Hanging With Mr. Cooper. From there, I went to work at the studio and began writing scripts with another guy from Yale, Garrett Donovan. We started writing for Newsradio and then went to Step by Step together. When that show ended, we had the unenviable job of finding another job.”

At that point, fate stepped in. “We heard that FOX was thinking of picking up a show based on this little cartoon that was a short and we went and met with Seth (series creator Seth MacFarlane) and we were off and running.”

When Family Guy was first canceled in 2003, the writing duo were lucky to land on another series and then shortly after that began an eight year run writing for Scrubs and then worked on Community for three years.

“We’d still be on Family Guy today if we hadn’t been some of the few people to get a job so quickly after the show was canceled the first time.”

“There’s a lot of luck that comes into play with being in this business for this long. Beggars can’t be choosers but we’ve been really lucky to work on three or four shows that we really loved…that made the work that much better.”

Brother Goldman is now married with three children and is working on several new television projects.

“I remember starting the AEPi chapter at Yale with Gerry Garcia. It was fun, jumping through all of the hoops to get the chapter on its feet at a school that wasn’t always friendly to Greeks. The guys that I met there and started AEPi with are the guys that I still keep in contact with. In fact, Paul Litmman may have been our first pledge and now he’s a big exec out here in LA with Sony and I still see him a lot.”

“Yale was a great place but AEPi completed my experience there. I found other guys were like me who shared the same language and culture and sensibilities and we wouldn’t have found each other without AEPi.”