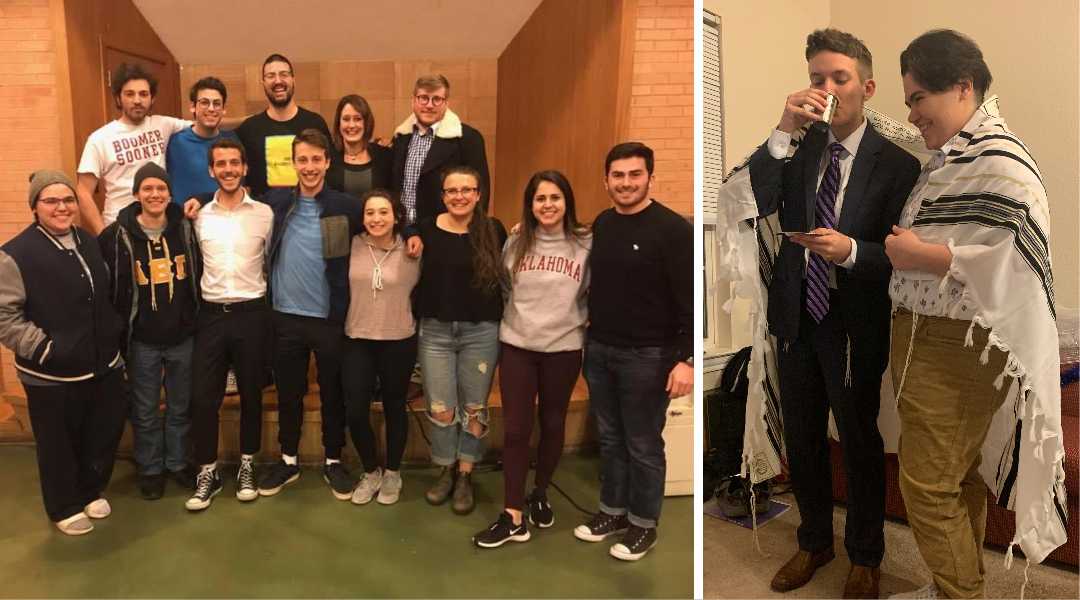 Brother Graham Wall (Oklahoma, 2020) is a Brother of Alpha Epsilon Pi who identifies as a member of the LGBTQIA+ community. He’s also a former member of the AEPi International Undergraduate Cabinet. This op-ed is his opinion, and by no means should be taken as professional or medical advice. He offers tips for Brothers to support their LGBTQIA+ Brothers after Pride Month, which is observed in the month of June, is over. Alpha Epsilon Pi International has a partnership with the non-profit agency, The Jed Foundation, to provide our undergraduate Brothers with resources and support they might need. To get help now, text “START” to 741-741 or call 1-800-273-TALK.

When I was being recruited to join my chapter, I was incredibly nervous about how I would be received. Religious and also identifying as queer, I didn’t know if I would fit into fraternity culture. However, my Brothers were open and receptive to learning about me as I was also learning about them as a new member. Brotherhood is a two-way street and members of the LGBTQIA+ community need to feel safe in choosing AEPi as we recruit them. My Brothers weren’t perfect — because nobody is — but their willingness to become educated and expand their understanding of the community made my time in the fraternity and in college so much richer. In fact, I recently got married to the love of my life over Zoom during quarantine with many of my chapter and national Brothers in attendance, supporting me in every step. Life is short and we don’t all have time to make the same mistakes! Here’s a list of ways that other Brothers looking to be allies (just as my Brothers were for me) can make a huge difference in the lives and experiences of other LGBTQIA+ Brothers.

This seems like a no-brainer, but it happens more than you know. Just because a Brother seems very “straight” (what does that mean, anyway?) and brings his girlfriend to the house, doesn’t mean he’s not potentially bisexual or pansexual. This is also important to remember when it comes to gender identity, as well. Don’t assume all of your Brothers or their partners are cisgender. If you happen to know that a Brother or a Brother’s partner is transgender, don’t assume their sexuality or the sexuality of their partners either. Cisgender people date trans people all the time, and it doesn’t inherently mean they’re bisexual or pansexual.

Some of the most fun events we did as Brothers involved going on double dates together or taking trips with friends or sweethearts of the fraternity. Consider the message being sent when everyone wants to know if the Brother who identifies as gay is bringing a date or just a friend, especially when straight-identified Brothers aren’t subject to the same scrutiny. Some bisexual Brothers may feel too hesitant to bring any love interests who don’t identify as women if they believe they’ll be talked about or judged. What about Brothers with nonbinary friends or partners, who can be made to feel different from the moment they arrive if activities are split into “girls” and “guys”? Try to make events and other functions as inclusive as possible. They don’t have to be rainbow Shabbats or Pride bashes to be opportunities that make all Brothers feel welcome.

Don’t ask personal questions just because you know a Brother’s gender or sexuality. You don’t need to know his sexual preferences, assigned sex at birth, or anything about his body or love life he didn’t offer to share with you. You wouldn’t ask someone you thought was cisgender and straight intimate details about their sex life if you had just met them or their partner. Extend the same courtesy to your Brothers.

College and young adulthood — and life after for our alumni — are times for growth, change and development. Brothers’ understanding of themselves, their gender identity, or sexuality may change. They may find new terms or names that better explain their experiences. Be the Brother they need and support them. Don’t tease them about their name changes or act confused if they have multiple name changes, even if it seems to be in good fun.

Mistakes happen. I even know LGBTQIA+ people who misgender themselves sometimes! But the thing to remember is that using the wrong name or pronoun or making an assumption and being called on it is just that, a mistake. Don’t explain why it was okay, or even worse, complain about the difficulty. Don’t mock yourself to the point that they become responsible for comforting you. It was a mistake, and your Brother won’t hold it against you. There’s always a next time!

One of the great things about a Jewish fraternity is that we can all find our space regardless of our denominational background or level of observance. However, this can complicate things for Brothers around this issue. Have those difficult conversations about Judaism and LGBTQIA+ issues and be open to helping Brothers who may be struggling to reconcile their faith with their identity.

Even if Brothers are comfortable enough to tell you or the chapter, they may not be ready or willing for others to know. It doesn’t become more acceptable just because others don’t know the person in question. Their identity is not a fun fact for you to share. However, if they need help telling others, your trustworthiness will be greatly appreciated when they know you’re not going to speak for them.

Don’t force your LGBTQIA+ Brother to speak up when slurs are used in person, in chapter communications, or any other setting by Brothers. I get it: Jake said gay when he meant pointless and he didn’t mean to hurt feelings. As an ally, it’s your job to call out your Brothers when you see or hear things like that. Don’t wait for your affected Brother to complain, because if he feels that is the chapter culture, he may never feel comfortable enough to.

Along with not outing Brothers against their will, this is a big one. Don’t boast in other organizations or meetings about how “diverse” your chapter or pledge class is because you have an LGBTQIA+ member or several. It tells your Brothers that they’re not really your Brothers, rather they’re different in some fundamental way and that is why you like them or recruited them. Be proud of them and boast about them for their achievements and accomplishments, just like you do for every other Brother.

Different situations call for different actions. If you and your Brothers are out somewhere and a Brother who identifies as gay chooses to tell a story about his boyfriend using she/her pronouns to give the appearance of a straight relationship; don’t out him. Understand that he may feel unsafe, especially in less accepting situations, and that he has a right to not disclose his gender or sexuality. You’re his Brother and he trusts you, but he may not trust the random person you met in a bar.

At the end of the day, we know you love your Brothers for whomever they choose to be and sometimes change can be difficult for everyone involved. I encourage you, if you think you’re trying hard to support your LGBTQIA+ Brothers, to try harder. Just because Pride Month is over, doesn’t mean we should stop supporting these Brothers. Their feelings and identities extend well beyond the month of June.