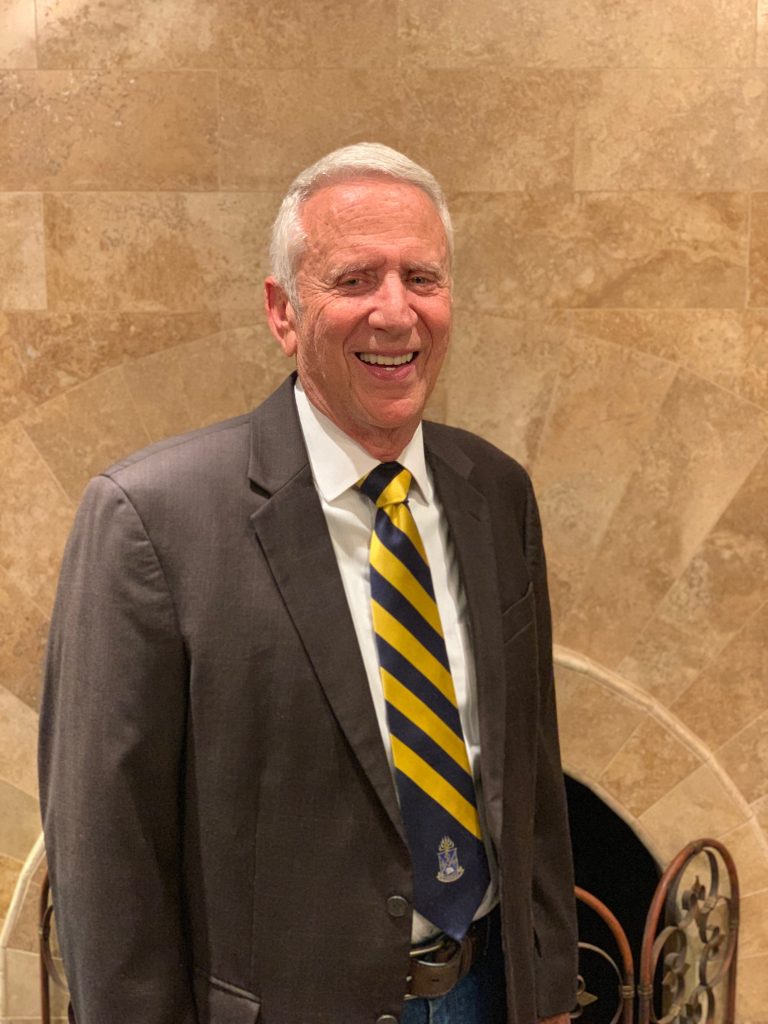 Arizona in the fifties … more specifically, sleepy, little, no-place, Tempe, Arizona in the fifties … was home to Arizona State College, an “institution of higher learning”. In 1885, Tempe Normal, a teacher’s college, was established and Old Main, was built to house students and administration. To this day, it is still central to the campus. In 1956, I came to Arizona because of asthma; in the days when TV commercials strongly suggested that you “pack up your sinuses and send them to Arizona!” Dr. Grady Gammage was President. Old Main, and a few exterior buildings … among them, the MU, English, Business, Science and Arts buildings, Matthews Library, College of Education, Goodwin Stadium, Danforth Chapel and a several men’s and women’s dorms, were all that existed. It was this backdrop that greeted me as I enrolled as an incoming freshman, September, 1956. Arizona State College, the nom du jour, then had a student body of 5,000.

It was just at that time that I met Bill Adler, who, upon learning I was Jewish, suggested I join AEPi fraternity. AEPi was chartered on the campus in 1951. Bill was among the original founders along with Sy Hirsch, Dave Kahn, Irv Schleshinger, Jerry Weiss, Marv Stein, Allan Goodman and Earl Geller. Many are of blessed memory. Little did I know, it was the beginning of what ultimately became one of the most important decisions I’ve made in my life.

Because of AEPi, Jewish life at ASC and, eventually the ASU campus, was a wonderful experience for me. Dr. Jack Hausman, Morry Turken and Don Freedman were Alumni Advisors. They were all very dedicated and actively involved in the chapter. There were 3 fraternity “houses” (using the term loosely) … 810 Maple Street, 1st Street and 123 E. 8th Street Homecoming 1956, when we lived on Maple Street, ASU played the San Jose Spartans. Several fraternities vied for the best house decoration for the event. We erected a giant toilet and Brothers took turns recording the sound of a toilet flushing over and over. When the seat went up, a “Spartan” was lowered into the toilet to ear-splitting sound effects. Then the seat was raised, the Spartan was pulled up again. The theme was, “Let’s see the Spartans go to Pot”. We won 1st prize for that one. When we lived on 1st Street, there was a train that ran through Tempe, around which we had to plan our scheduled classes. We had to beat the train, or be hopelessly late for class! At the 8th Street house, it was so crowded, my eventual business partner, Bob Shcolnik and I shared a two-person trailer in the back yard. One evening, the Brothers chained us in the trailer in a failed attempt to haul us out to the desert. Fortunately for us, it had rained and the trailer got stuck in the mud in the back yard. They finally had to give up the ruse! In August 1958, a two-tone 1953 Chevrolet took off in the wee hours of the morning for a destination over 2,500 miles away. Brothers Norm Zaslow, Murray Goodman, Ted Kort and myself attended the National AEPi convention at Grossinger’s Resort in the Catskill Moutains of New York. With 4 drivers, we drove straight through up and back. At that convention, our Alpha Sig Monitor was recognized as the Best AEPi publication, and earned that year’s National Publication Award. The Monitor, published twice a year during the fall and spring semesters, recalled important events of the times and provided much-needed funds from parents and advertisers. Prior to the 1958 general election, we collected signatures and stormed the Arizona Capital to petition for the name change from Arizona State College to Arizona State University. Having fulfilled all the requirements of a university, we fought for the rightful name of Arizona State. AEPi Brothers made a banner and tied it to trees on either side of Washington Street in front of the capital. Some students commandeered a push lawn mower and clipped “ASU” in the capital grounds. On November 4th, Prop 200 passed!

So many wonderful memories of college life flood my mind. Time, of course, was devoted to studies to whatever degree each Brother felt appropriate. Of course, the dances and social activities were memorable and beyond fun. Many Brothers went through the chapter chairs and assumed leadership positions in the fraternity as well as student government. Minnie Lindquist was our beloved House Mother. I was one of her favorites and she would make me anything I wanted at any time.

Many of my Brothers who have been in my life then and now, have influenced me for over 6 decades. I mentioned my business partner, Bob Shcolnik. In 1961, he and I founded our independent insurance agency cleverly named, Harris/Shcolnik & Associates, Inc. He and I operated in Phoenix and Mesa for close to 40 years and the agency still enjoys an excellent reputation long after our retirement. Brothers Ralph Segal and Mel Sternberg were our business and personal CPA and attorney, respectively. We purchased office furnishings from Arizona Office Equipment Co. (Goodman’s), owned and operated by Brothers Alan and Murray Goodman. To further illustrate our connection to AEPi … I met my wife, Lynn, through Brother Mort Rudin. We were married June 3, 1962 by Rabbi Albert Plotkin, honorary AEPi. Besides Mort, Bob, Ralph and Mel, our bridal party included Brothers Ted Kort, Harvey Beller and Nick Einfeld. In 1980, Brother Ken Abrams got me involved in playing badminton at the downtown YMCA. I’m still playing to this day.

Lynn and I hosted an “Old Guys AEPi Reunion” at our home in 2011. We connived with Brother Lou Goldstein, his wife, Lois, and Ralph’s wife, Rita, as it was also a surprise 75th birthday for Brother Ralph Segal. Twenty-four Brothers and their spouses joined in the celebration and many hadn’t seen one another in over 50 years! It was an evening of warmth and recollection, friendship and fellowship. Besides the afore-mentioned Brothers, attendees included Brothers Burt Kruglick , Don Shor, Jerry Kramer, Lou Goldberg, Cal Sunshine, Arnie Rosenberg, Murray Peck, Harold Teuteberg, Dan Abrams, Earl Geller, Alvin Bender, Lenny Frankel, Stan Stoneman and Larry Borden. It was an evening to cherish and recall again and again. Everyone who was there still talks about it! Since then, several have passed to the Chapter Eternal.

Forty-five years after our wedding, on June 3, 2007, because Rabbi Albert Plotkin, (honorary AEPi) was close to 90 and our step-father, Leon Snitz was 101, we decided to have a 45th anniversary renewal at Temple Beth Israel in Phoenix.

We made the right decision, as they both passed within a very short time. That was attended by most of our original bridal party, Brothers, Shcolnik, Rudin, Segal, Sternberg, Kort, Einfeld, plus others.

In 2009, one of our sons-in-law suffered a job loss at a crucial juncture in their lives. It was Brother Mel Sternberg who was instrumental in recommending him for a position with done of his sons-in-law. It’s been ten years …

For our 50th Wedding Anniversary, June 3, 2012, we decided to celebrate in Belle Vernon, PA where Jerry was born and raised, and where we’ve travelled for 20 summers. Brother Mel Sternberg flew to PA and wrote and performed the beautiful ceremony in our honor. For that, we are most grateful.

In 2013, Lynn and I were privileged to attend the AEPi Centennial celebration in New York and attended all the events of that wonderful weekend. In 2018, Past Supreme Master, Gary Shapiro, Bill Adler, Lynn and I participated in the Rededication of AEPi on the ASU campus and Passing of the Charter ceremony. Being the oldest past Master there, the framed, 1951 charter was passed from me, chronologically through all the attending past Masters till it came to the hands of the current Alpha Sigma Chapter Master of AEPi. It was a touching, moving occasion we will never forget. We are extremely proud of Alpha Sig at ASU. Today’s chapter ranks 7th in size nationally and 1st in GPA! MAZAL TOV!

Enough said. Besides marrying my wife of 57 years, joining AEPi in 1956 was the 2nd most important decision of my life.

TO MY CHERISHED BROTHERS, THE MEN OF AEPI – ALPHA SIG CHAPTER …

MY CONTINUED LIFE-LONG, HEARTFELT THANKS, LOVE AND DEDICATION.