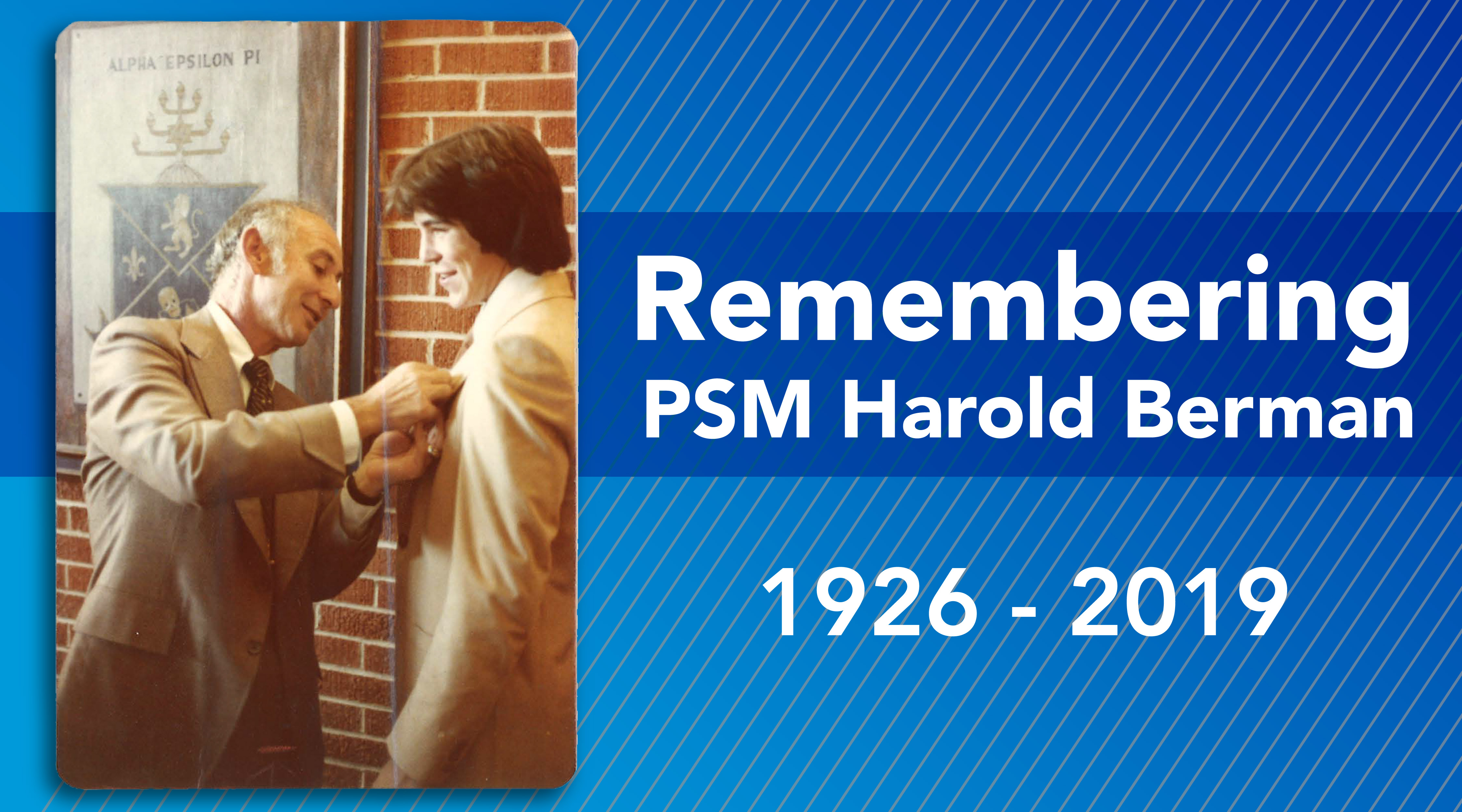 (Note: much of this article is based on an interview done with Harold Berman in January 2017)

The Dallas Jewish Community and Alpha Epsilon Pi Fraternity lost a great man and fraternity Brother when Harold Berman passed away in March of 2019.

A 1946 graduate of the University of Texas and the Gamma Deuteron chapter of Alpha Epsilon Pi, Harold was also a graduate of Harvard University Law School. He was a stalwart member of the Dallas legal community for nearly 70 years.

Originally from Colorado City, Texas, Harold’s early years were influenced by the small but close-knit Jewish community in his small West Texas town. “Everyone knew we were Jewish. Our family ran a lot of the retail stores in our small town. My uncles owned the department store and the grocery store, and my Dad owned the dry goods store. They all closed on the Jewish holidays and I can remember people lined up outside waiting for the Yom Kippur fast to end so they could do their shopping,” he said. Harold remembered his family as committed to their Jewish faith and just as committed to being charitable and civic minded.

“My Mom was the tough one. She told me that I was going to be a lawyer and my twin brothers (Irwin and Stanley) were going to be doctors. There weren’t any questions to ask. I think my brothers wanted to be veterinarians, but they weren’t given a choice. Guess what? I became a lawyer and my brothers are cardiovascular surgeons in California. That’s how my mom worked,” Harold recalled.

Graduating high school in 1942 at the tender age of 15, Harold was too young to be drafted into the military to fight in World War II so he attended college. “I can remember sitting around our house on the day the Japanese attacked Pearl Harbor,” he recalled. “My Dad was a World War I veteran and he looked at me and said you’re going to be the one who ends up serving in this war. He was right.”

Because he received a scholarship to attend the University of Texas, he soon found his way to Austin where he pledged Alpha Epsilon Pi. “There were four Jewish fraternities at UT at the time. AEPi had just started up there in 1939 and a boy from my home town had pledged. I remember showing up at my dorm with my Mom and Dad and the AEPi boys met me and carried my trunk up three flights of stairs to my dorm room. That was how they got me.” 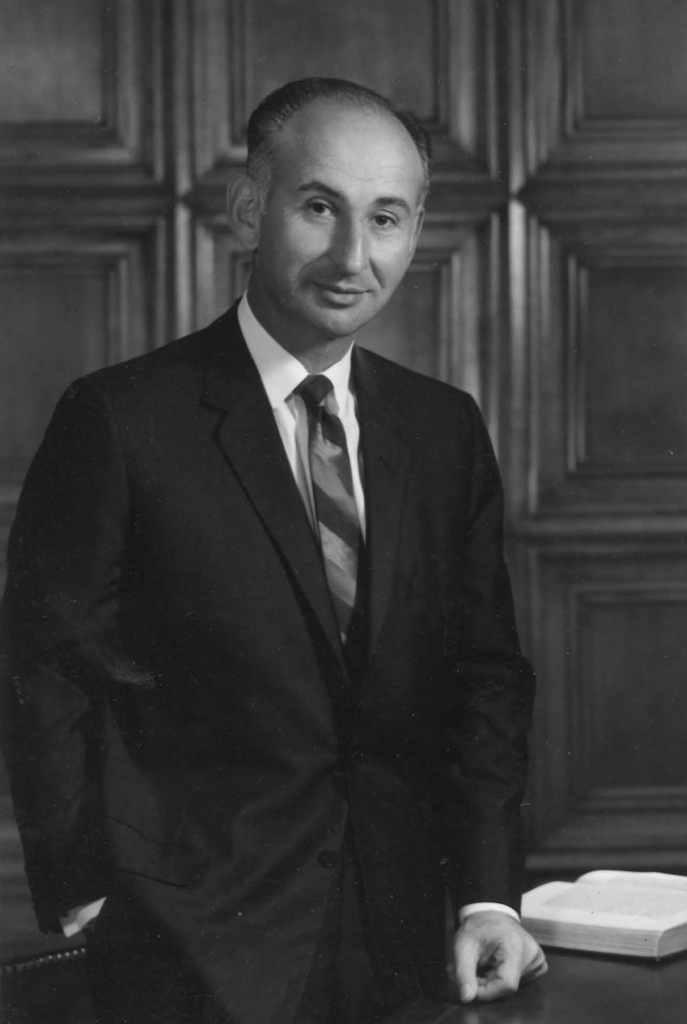 The chapter, still in its infancy, had about 40 Brothers at the time and a house on Elmwood Place. “But, in November of that year, they called up the reserves and suddenly almost everyone was gone. By the next fall, we were the only Jewish fraternity left on campus and we only had five guys. I was still only 16 and couldn’t serve. Our advisor, Morris Goldstein, found us a small house on 21st Street and we pledged 12 more guys that year.”

After three years as an undergraduate, Harold entered the University of Texas law school as a part of an accelerated program to receive both his undergraduate and law degrees in six years. After one year of law school, though, it was his time to enter the service.

He joined the Army before he could get drafted and was sent to Fort Sam Houston in San Antonio for basic training. “They needed replacements for the war in Europe right away, so basic training was accelerated. I was in the infantry and getting ready to head overseas to fight when they called me out, put me on a troop train to Chicago and had me enroll in a program at the University of Chicago to learn how to read, write and speak Japanese,” Harold said. “They had handpicked 100 of us from all over the country to do that to get ready for the next phase of the war.”

“While we were there in Chicago, the war in Europe ended and, I’ll never forget, they showed us a film from the concentration camps. I remember just being stunned,” Harold recalled.

After finishing the Japanese course, Harold was sent first to Yokahama and then to Tokyo to work with the Allied forces translation and interpreter service. By the time he got there, Japan had surrendered, and he was assigned to General MacArthur’s headquarters to provide interpretation services during the war crime trials in Japan.

When he was discharged from the service in 1946, Harold returned to Austin where AEPi was growing like crazy. The chapter purchased a house on the corner of Rio Grande and 26th streets and Harold’s father bought the house next door, which became known for years as the “Berman Annex.”

“David Kaplan had found this house, but we needed some money to purchase it. The chapter had more than 100 men by then and we needed something big. David called Ted Raccoosin (a Past Supreme Master of AEPi) and asked to borrow some money. Ted sent us something like $50,000, which was an incredible sum back then, to get us rolling. We paid that all off.”

Harold, at the insistence of his mother, applied to Harvard Law School and was accepted for the class of 1947. “I was waiting to go to law school that summer and David Kaplan called me and said that he was going to the AEPi International Convention at The Palmer House hotel in Chicago that summer and so he suggested that I go with him to Chicago and on to Boston from there,” said Harold. 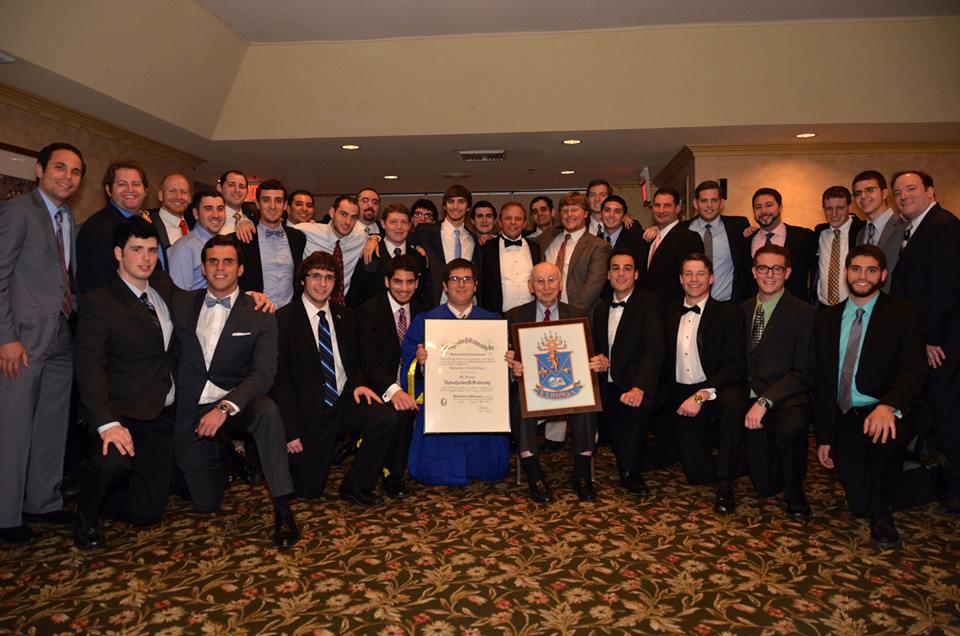 That began his 70-year commitment to Alpha Epsilon Pi International fraternity. He met the fraternity’s executive vice president, George Toll, in Chicago and, before he knew it, he had committed to going to Boston and living in the Boston University house and helping the chapter with rush before he began law school at Harvard. “George Toll was one of a kind. He could be tough but, man, could he get you going about AEPi.”

After graduating law school in 1950, Harold returned to Texas and took the bar exam in Dallas. That summer, the AEPi International Convention was to be held at the Baker Hotel in Dallas with David Kaplan as the convention chair. It was there that he met Allen Paschen, who became one of his closest friends in the fraternity.

“That was the first time Allen had ever been to Dallas. Mona, his wife now, was there because she was the chapter sweetheart for another chapter. They were both at a Texas AEPi event and I introduced them,” said Berman.

“Harold and I hit it off right away and we remained friends for all of these years, nearly 70 years. He introduced me to Mona and he and his wife used to visit us in Wisconsin pretty regularly. Our daughters are still friends,” recalled Past Supreme Master Allen Paschen (Marquette, 1950). “For all of these years, we always used to have a bet every time my Packers played his Cowboys. It was a big deal… $5. I remember once the Packers lost to the Cowboys and I sent Harold 500 pennies in a jar filled with molasses. He returned the favor the next year when we won by sending me 500 pennies in a box of pecans.”

“Harold was just one of the nicest and best people we ever met in AEPi. He was truly my Brother,” said Paschen. 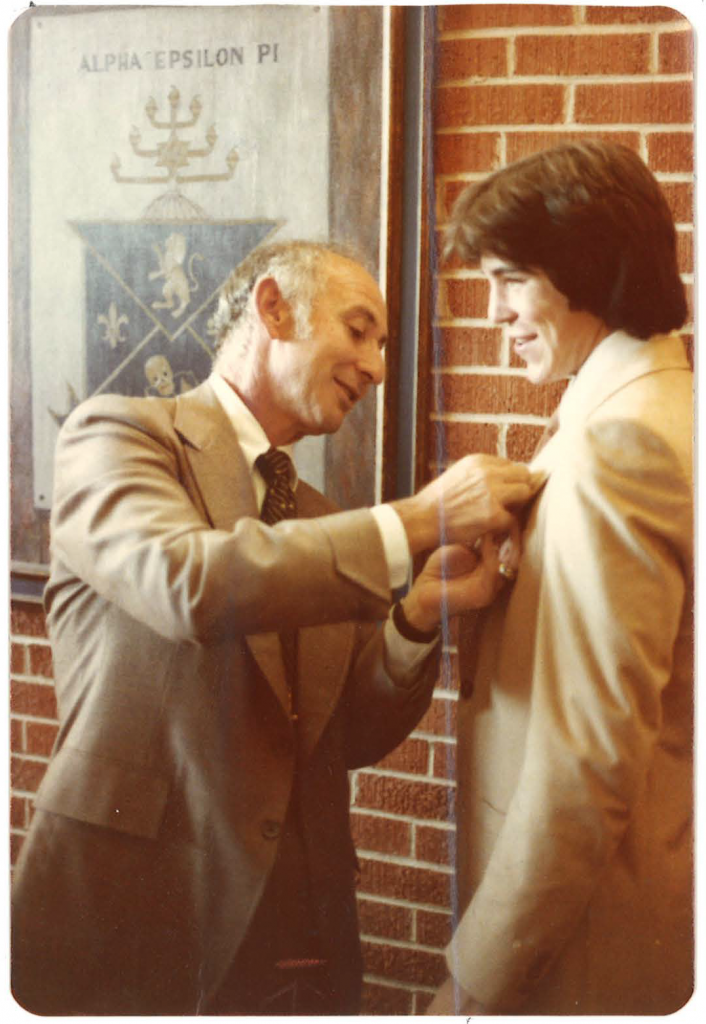 Harold Berman helping a Brother with his lapel pin

Harold rose through the volunteer ranks of AEPi but stayed involved with other organizations like The Columbia Club in Dallas, B’nai B’rith and the Anti-Defamation League. He followed in the footsteps of his friend and mentor, David Kaplan.

In 1967, a year before he was installed as Supreme Master, his wife passed away suddenly. Harold recalled the time with deep emotion, “I was in deep grief, I was really out of it. And, the doorbell rang and standing there were David Kaplan and George Toll. Yeah, George was a real pain, but he was the most sincere guy I ever met. He was wonderful.”

Former Alpha Epsilon Pi Executive Vice President Sidney Dunn recalled, “I began traveling as a Field Secretary in 1967 and during my second year of travel, Harold served as Supreme Master. He was the second Gamma Deuteron Brother to serve as Supreme Master following his dear friend and chapter brother David Kaplan (of blessed memory). It was the last great year for the Fraternity until the late 1970s because of the Vietnam War and the hippie/’do your own thing’ generation which devastated most fraternities.”

Even following a successful legal career in Dallas and serving on multiple boards of large organizations, Harold always gave credit to AEPi – and the Gamma Deuteron chapter – of AEPi for helping to teach him and shape his values.

“My pledge brother, Herman Smith, taught me how to tie a windsor knot and I thought of him every time I put on a tie. But I learned so much from AEPi and I always wanted to get others to feel that sense of brotherhood that I felt,” he said.

“There’s just something… I don’t know how to put it. When you’re a 16-year-old kid and walk into AEPi. They have this spirit. They talked about brotherhood. It was a small group back then, faced with war. We were all going to go to war—one of my chapter Brothers was killed over there. But, there’s a bond in AEPi that’s hard to describe. It’s continued for me, my whole life.”