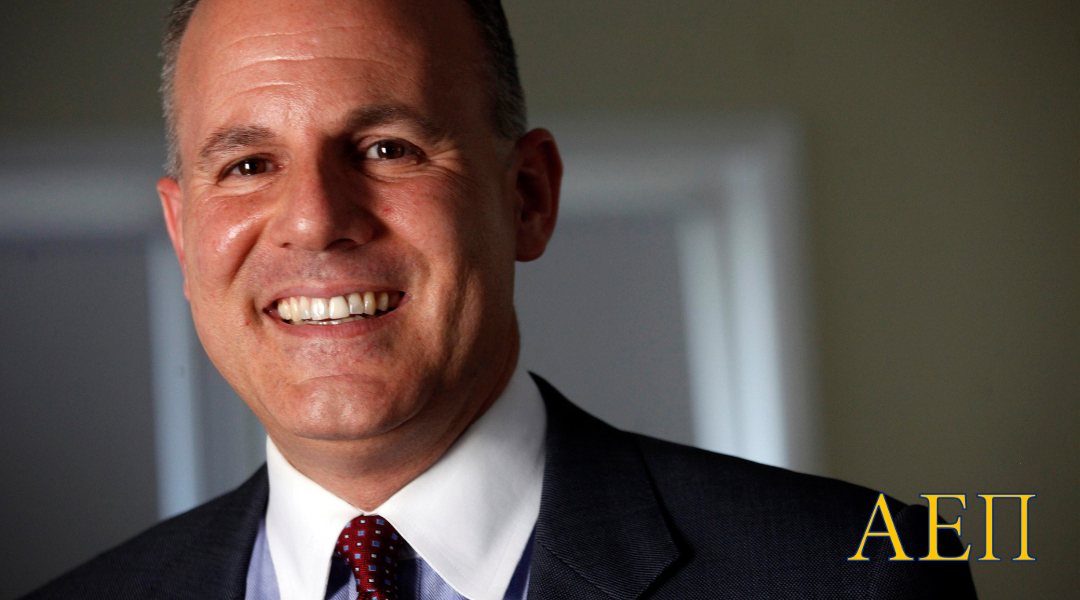 “I will never forget my first introduction to AEPi. I was at a Shabbat dinner at my alma mater, the University of California – Berkeley, when I saw three freshman wearing the same blue, diamond-shaped pledge pin that we all know so well,” said Brother Past Supreme Master Elan Carr (California – Berkeley, 1990). “I asked them what fraternity they were in and whether it was Jewish.  The pride they exuded when they answered my questions, and the love they obviously felt for one another, made me realize that AEPi would be my home.”

Since that auspicious day more than 30 years ago, Brother Carr’s journey, both fraternally and professionally, have been dedicated to doing the right thing, fighting for freedom and the Jewish people and helping to ensure that the next generation of Jewish leaders follows in his footsteps. Earlier this year, Brother Carr was appointed the U.S. State Department’s Special Envoy to Monitor and Combat Anti-Semitism.

Brother Rob Ackerman (California – Berkeley, 1986) remembers Elan from his early years in AEPi, “I was the founding Master at Berkeley and Elan was one of our first pledges. He had a strong Zionist connection from the beginning and intellectually, it was just a ferocious firepower. We used to go out to some local establishment and at like 10:00PM, he’d tell me  that he had to go and write like a 20 page paper that was due the next day. I’d say, ‘You mean you have to go finish the paper?’ and he’d tell me, ‘No, I haven’t started it yet’ and he’d go home, stay up all night and write a flawless paper on some esoteric philosophy subject and he’s get an A or an A+. That’s just how smart he was.”

After graduation, Elan attended law school at Northwestern University and then worked as a lawyer in Los Angeles before joining the U.S. Army Reserve, Judge Advocate General’s Corps. In 2003-04, he was mobilized in support of Operation Iraqi Freedom and spent close to a year on military deployment to Iraq. He helped to lead a joint anti-terrorism team in life-saving missions throughout the country, and he prosecuted terrorists who attacked U.S. troops. He was also part of the Coalition Provisional Authority’s efforts to establish an independent Iraqi judiciary, and he helped to train Iraqi judges and lawyers on topics such constitutional law and criminal defense.

“I remember when Elan called me and said, ‘Dude, I’m in the Army, come join me!’ He wanted to serve his country but he also wanted to be a Jew in the Army. He saw that as very important at that time in our history. He always saw a bigger role for himself,” said Brother Ackerman.

“I took on this role because anti-Semitism is rising globally at alarming rates, and I wanted to make a difference by leading America’s fight against this ancient evil,” said Brother Carr. “I have always been passionate about public service, and my career has been focused on two things: fighting evil and keeping people safe. I became an Army officer to protect our country, and I became a criminal prosecutor to protect our communities. Now in my new role I have the honor of fighting on behalf of the United States to protect the Jewish people throughout the world.”

Even today, Brother Carr credits his AEPi experience with helping to make him successful. “AEPi taught me how to lead as a Jew. I learned to be proud and committed both to the Jewish people and to my country; I learned how to speak publicly and advocate for causes that are important; I learned how to manage people and budgets; and I learned how to motivate those around me. I would not be the person I am today without the lessons I learned in AEPi.”

“There is nobody in the world that I know who could be better suited for this job than Elan. His knowledge of Israel and Jewish history is unparalleled. He knows the facts. He’s passionate about the Jewish people and Israel and he is, without a doubt, the single best extemporaneous speaker I have every heard,” said Andy Borans, the CEO of the Alpha Epsilon Pi Foundation.

In his appointment announcement, U.S. Secretary of State Mike Pompeo said of Elan, “His lifelong commitment to our country and the protection of Jewish people bolsters the Administration’s unwavering fight against anti-Semitism.”

“Elan Carr … has been devoted to the issues relating to anti-Semitism for many years,” said Malcolm Hoenlein, executive vice chairman of the Conference of Presidents of Major American Jewish Organizations, in JNS. “He understands the history, as well as the current challenges. I am confident he will work assiduously to address the rising tide of anti-Semitism abroad.”

Brother Carr’s first few weeks in the position have been a whirlwind. He’s been to a conference on anti-Semitism in Bratislava organized by Slovakia, which currently holds the chair of the Organization for Security and Cooperation in Europe, and then to a European Union conference on anti-Semitism in Brussels. When he returned to the U.S., one of his first stops was at his alma mater for the West Coast conclave of AEPi.

“AEPi holds the key to reducing anti-Semitism because AEPi represents Jewish unity. A consistent message I bring to every Jewish audience is that Jewish unity is not a luxury, it’s a requirement. We can disagree on a lot of things, and that’s normal. But when it comes to our survival? When it comes to our safety? When it comes to our most basic rights? On that there can be no disagreement.  We must speak with one voice, and if we do, there is nothing we cannot achieve,” said Brother Carr. “Think of how powerful, how desperately needed, is the AEPi model. We represent Jewish unity because we love each other. A Brother is loved and cherished regardless of his observance level, his politics, or his academic standing. That has got to be our message.  We should fight our enemies, of course, but we absolutely must get our own house in order. AEPi can teach that to the Jewish world better than any other organization.”

“AEPi Brothers have what it takes to be the best ambassadors of our people, and I know that if we lead to our potential, we will change the world.”