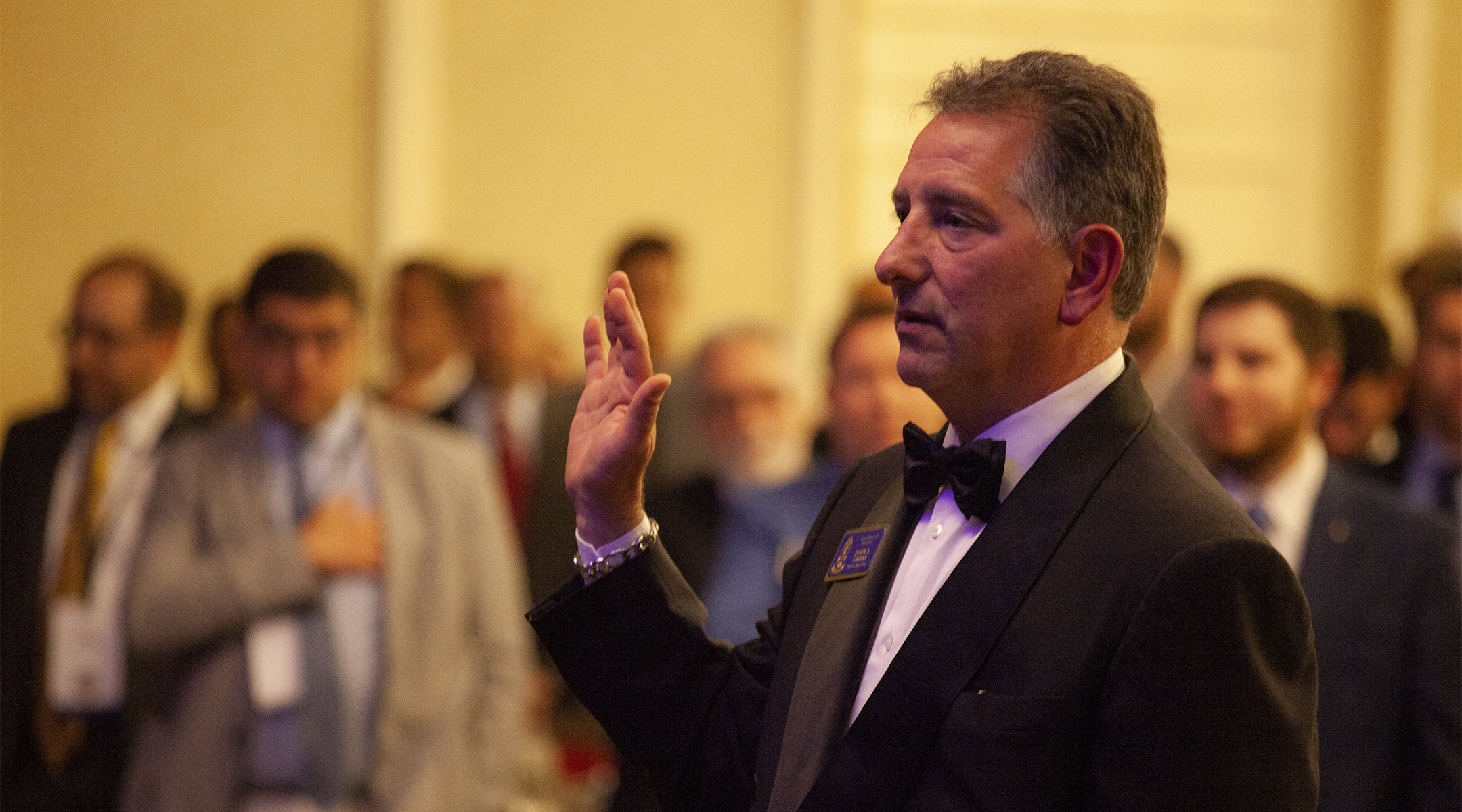 “When I think about my fraternal path, I always come back to a Shakespearean quote,” said Brother Jason Oshins (Union, 1987) who was installed last month as Alpha Epsilon Pi’s 75th Supreme Master. “Our doubts are traitors, and make us lose the good we oft might win, by fearing to attempt.”

“I had a lot of doubts about starting AEPi at Union College but, in the end, it has been one of the best and most important things I’ve ever done.”

Born and raised in Brooklyn, Brother Oshins matriculated at Union College and, as a freshman in 1983, attended a UJA leadership trip to Israel where he met Brother Steven Weinstock (Michigan, 1986) who was a re-founding father of Omega Deuteron at the University of Michigan. Steve called then Expansion Director Andy Borans and put him in touch with Jason and AEPi at Union was born.

“The University didn’t want us on campus, but we kept pushing. I wanted to go to law school so I understand the constitutional right of freedom of assembly so I knew they couldn’t stop us from gathering together so we kept growing.” Eventually, 18 men joined the Founding Father class of the Upsilon Sigma chapter.

“It was never easy. At first, everyone was against us. I can remember getting a call from someone at the college one night that our letters were burning. We had put up some big wooden letters on campus and someone came and burned them down. I was raking the embers of our letter wondering if we’re going to make it.”

By the next year, the burgeoning colony was participating in campus intramurals but under the name of “AEPi Outlaws.”

“It’s not unusual for Jews to be the outlaws so we reveled in it. We even made it to the semifinals of the tug-of-war competition,” Brother Oshins.

“I always had a sense that AEPi was bigger than just our chapter. I’m here because a Brother at Michigan and Rutgers met me on that Israel trip and ‘rushed me.’ We were starting AEPi at Union at the same time that Andy (Borans) was working to start up the AEPi chapter a SUNY-Albany and then we were initiated at a big party in Syracuse so I always had that sense that there was a bigger AEPi world than just in Schenectady. I attended my first International Convention in Scottsdale, Arizona in 1985 and my eyes were opened even further.”

“When I first met Jason, I knew that we were going to be successful getting AEPi started at Union College,” said AEPi Foundation CEO, Andrew Borans. “He had the passion and drive of a natural leader and the commitment to our mission to be an excellent Brother of AEPi.”

There was one final milestone for Brother Oshins in his time as an undergraduate. “In the fall of 1986, the Dean of Students and others from the administration came to our chartering. Sigma Chi and Alpha Phi Alpha were our strongest proponents and we were finally recognized.”

After graduation, Brother Oshins attended NYU law school and began a long tenure as a chapter advisor for chapters at NYU, Brooklyn College, and other schools in the New York metro area. In 1994, then Supreme Master Marc Katz asked him to begin service as Regional Governor and Jason’s volunteer commitment to AEPi took off. He was infamous for attending convention each year to meet with undergraduates and remind them of the importance of staying true to their Jewish identity.

The outlaws continue to thrive.

In 2011, Brother Oshins joined the Supreme Board of Governors and his commitment to our Brothers throughout the world continued to grow. A lawyer in private practice, Jason was a frequent guest on Nancy Grace’s Headline News show for years and continues to be a commentator for her Sirius XM show.

Now residing in New Jersey, Jason and his wife Alice have two teenage children and are involved in their Jewish community as well as AEPi.

“I know that Jason will be an excellent Supreme Master. He’s been my friend for more than 20 years and he really cares about the future of AEPi. It’s a tough time to be a fraternity leader and we are lucky to have someone like Jason to help guide us,” said Jim Fleischer, AEPi’s CEO.

“I could not be prouder than to turn over the reins of leading the Supreme Board of Governors to my close friend from Brooklyn,” said Brother Jeff Jacobson, AEPi’s immediate Past Supreme Master. “Jason has a rare blend of intellectual horsepower, common sense, and finely-honed critical thinking skills to lead us through these challenging times.”

Taking the highest office in AEPi can be a daunting responsibility but, for Brother Oshins, it remains important not to allow his doubts to become traitors.

“Becoming Supreme Master affords me the penultimate opportunity in giving back to our fraternity which has given me so much,” said Brother Oshins. “During my tenure, I want us to rededicate ourselves with traditional Jewish values, fighting the rising tide of anti-Semitism on college campuses and providing the undergraduates with meaningful leadership experiences at this important juncture in their lives.”

“I can remember in May of 1985 before we were official on campus. We were planning a big party at the Ramada Inn in Schenectady. We had spent almost all our chapter money on this event and had hoped it would be a big opportunity for people to get to know us and for us to make some money. Brother Matt Halpern and I were sitting outside right before people started to arrive. We were worried and confided in each other that this was either going to work or we were going to just blow it up and walk away. And, we had like 400 people show up and it turned into a great event for us and propelled us to recognition.

We overcame our doubts, attempted it, and succeeded.”

The outlaws had won.