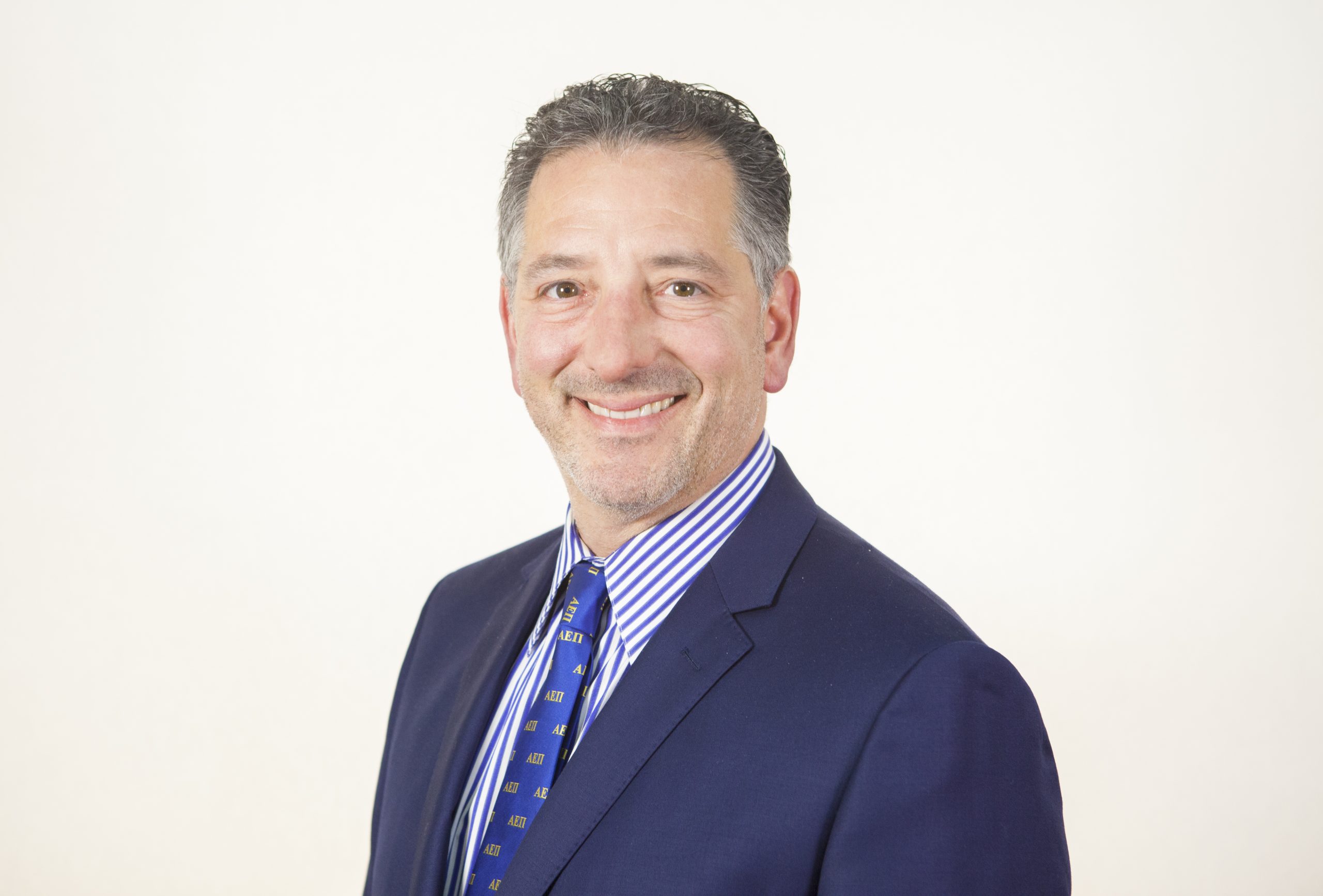 “Our doubts are traitors and make us lose the good we oft might win by fearing to attempt.” I have been using that quote of William Shakespeare from a class at Union College since 1985. At AEPi, we have never feared or daring to attempt. From the arch at NYU and the immortal eleven to this very day.

Our Brothers are profiles in courage. For example, PSM Sam Blustein and Jim Fleischer are both an inspiration to me. We are family.

To my friend, and for the first time, Past Supreme Master Jeff Jacobson I am so proud of you. Thanks for paving a smooth road for me.

Fraternity is a Family, and I couldn’t be involved at this level if I didn’t have the support of my wife, Alice. If you know me and you know her you still shake your heads and wonder how we have been married for almost 25 years. I am a work in progress! I do know how blessed I am to have her love and support. Our two children, Jake and Rachel, still question why I can’t grow up and stop being a frat boy. I love you both.

I am excited to be at this point in time with all of you. My initial encounter with AEPi was on a student leadership mission to Israel where I met Steven Weinstock, a brother at Michigan. He reached out to Andy Borans and I accepted his challenge of starting a colony and Upsilon Sigma — Union, Schenectady — was running. Eighteen of us, 14 Sophomores and four Freshman.

I remember one night at 2:00 a.m. having to go put out a fire with Brothers Matt Halperin and Brad Flansbaum as our letters were burnt into the ground, an anti-Semitic act just as we started out.

In the Parsha this week, the Ten Commandments are in front of us again and Moses reappears as he beseeches Hashem to allow him to see the promised land with the people of Israel. But G-d cautioned the leader of the Jewish people and said you will pass the leadership to the future. Joshua will lead the Jewish people into the promised land and future generations will have other leaders.

A lesson to be learned for all and very relevant to our fraternity.

Going back in time.

The summer of 1969 was a watershed moment in American history. That single summer, we saw the tides of society dramatically shift through the Stonewall Inn uprising in NYC and the birth of the gay liberation movement; in Bethel, New York, half a million people experienced an unprecedented three-day stretch of nothing but music, peace and love, peace and love, at the Woodstock Festival.

And, of course, we witnessed humanity touch the face of G-d by taking its very first steps on the moon. As we passed the anniversary of each of these events this summer, it struck me that the summer of 1969 was a pivotal moment for American culture and society, but it was also a summer full of vital and powerful Jewish teachings.

Bring us to the summer of 1969 and the moon-landing. One night, before one of the later Apollo missions, the astronaut Ken Mattingly went out to the Launchpad at the Kennedy Space Center to study Saturn V, the rocket that had launched Apollo 11 to the moon. He took the elevator to an upper level of the launch tower at the Kennedy Space Center and entered a large room, packed, with hundreds of pipes, cables and wires. A single technician was in the room when Mattingly arrived and they began to chat.

During the course of their conversation, the technician said that he really had no idea how the rocket worked. He didn’t fully understand how the enormous amount of fuel could create sufficient force to allow the rocket to escape Earth’s gravitational pull or how the navigational system could successfully guide the rocket to the moon. What he did understand, however, was the panel directly in front of him. Everything on that panel was his responsibility; it was his job to understand that panel and to ensure that it was in perfect working order on the day of the launch. He took his job extremely seriously — he knew every detail on that panel, inside and out. “If the mission fails,” the technician said to Mattingly. “I can assure you –it won’t be because of me.”

In that moment, Mattingly realized exactly why the first Apollo mission to the moon had been such a success. It wasn’t solely due to intellect, extensive funding or even sheer luck. The real reason we made it to the moon was that every single person on the project embraced a profound sense of personal responsibility. Every person, no matter how small a role they played, said to themselves “if the mission fails, it won’t be because of me.” And, because everyone embraced that attitude, on July 20, 1969, Neil Armstrong successfully took one small step for man, one giant leap for mankind. That is why we were able to reach the moon. As Winston Churchill said. “the price of greatness is responsibility.” I can’t think of a more powerful and vitally important teaching for International Jewry and AEPi in the 21st century.

There has been no shortage of attempts to explain these disturbing patterns in Jewish life. To tell you the truth, I am not particularly interested in the why of how we got to where we are. I am much more interested in, what we can do to re-energize Jewish life going forward. Our fraternity is part of that answer.

In a 1951 essay entitled “To be a Jew: What Is It?”, Rabbi Abraham Heschel provides what I think is the best articulation I have read about why it is fundamentally and vitally significant to actively embrace Judaism. Heschel writes “What is at stake in our lives, is more than the fate of one generation.”

The task begun by the patriarchs of our fraternity, and carried out by countless Brothers of the past, is now entrusted to us. We are the only channel of Jewish fraternalism and tradition. We must hand over the entire past to generations to come. We are either the last Brothers or we are those who will give new life to our tradition. We will either forfeit or we will enrich our legacy for ages

That doesn’t mean that we are each responsible for the entirety of AEPi’s future, just as no single individual was responsible for the first moon landing. It does mean that we are each obligated to play a role, no matter how small, in securing the Jewish future. As we are taught by Rabbi Tarfon in Pirkei Avot, “It is not incumbent upon us to complete the task, but neither are we free to desist from it.” In other words, we can’t be arrogant to say, “I’m the only one who could possibly complete this task.” But we also can’t be so self-effacing as to say, “What difference can I, a mere individual possibly make?” We must find a healthy balance between the two. I think that healthy balance is precisely the philosophy that got us to the moon. We should all be saying to ourselves: “I know that I can’t single-handedly transform AEPi. That is far too great a task. But, I also know that I have an obligation to play whatever role I can to help secure its future.”

We all need to be saying to ourselves: “If AEPi fails, it won’t be because of me.”

This year is also the 51st anniversary of Abbey Road, the last album that the Beatles recorded together. As any armchair Beatles historian will tell you, the period leading up to the release of Abbey Road, was a tumultuous one. The White Album was less of a Beatles album than it was a compilation of four solo albums. John Lennon later said that you could actually hear the sound of the Beatles breaking up on the White Album; of the album’s 30 tracks, only 16 have all four band members on them.

The next record, Let It Be, was even worse. George Harrison actually quit the band for a week in the middle of the recording sessions, and had to be persuaded by his three other bandmates to come back and finish the album. Yoko Ono’s presence in the studio was becoming a problem, and Paul McCartney’s perfectionism was getting under everyone’s skin. Not a good time.

But for their last record somehow the band members were able to bury the hatchet. Before they went into the studio, the band had decided to set aside all of their tension and in-fighting. “We just want to make one more album, the way we used to do it,” he said. And that is exactly what they did. For the recording of Abbey Road, all four members of the band put their best foot forward. They helped each other, they supported each other, and they set aside their personal grievances. In other words, one last time, every member of the Beatles embraced a sense of personal responsibility. And as a result, together, they produced one of the greatest albums in history of rock.

Brothers, as I’m sure you know, we are in the midst of strange and challenging times. If we hope to ensure that AEPi remains a place we are proud to call our Jewish home, a place defined by Torah, by mitzvot, by acts of loving kindness and by community, then we all have an obligation to think strategically about our future, and to take action to make sure that that future becomes a reality. And, if you would like to be involved in strengthening AEPi, then please start now, in whatever capacity you can.
Get involved in one of the many amazing programs and initiatives that we have. Join us in Tikkum Olam, so that you can help our fraternity give back to the world that gives so much to us. Get involved with our Supreme Board of Governors, so that you can help secure the brightest possible Jewish future for our children and our Brothers.

Figure out the best way that you can contribute to the ongoing success of our fraternity. Now is the time to take action. If not now, when?

But, whatever course of action you choose to take, remember this: you are playing an indispensable role in the future of both AEPi and the International Jewish community. Without your help, your dedication and your commitment, neither AEPi nor Judaism will have a future. We need everyone. And we need everyone to say, “neither my Fraternity nor Judaism will fail because of me.” If everyone embraces that philosophy, that mindset, that attitude of personal responsibility, then the sky is the limit. We would make it to the moon and back.

The task begun by Immortal Eleven, and carried out by the countless Brothers of the past, is now entrusted to us. And, while we may not be obligated to complete the task, neither are we free to desist from it.
I say to all of you: G-d bless all of our Brothers and sisters in the community. G-d bless this country. G-d bless AEPi. Good Shabbos and Hey…. Let’s be safe out there.