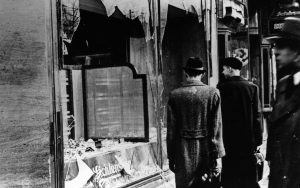 Nov 9, 2020 12:00 PM EST This year, AEPi is commemorating the anniversary of Kristallnacht (November 9-10, 1938) with the Simon Wiesenthal Center. Join us for the program to hear from Dr. Efraim Zuroff and TM Garret. During Kristallnacht, also known as the Night of Broken Glass, Nazis in Germany torched synagogues and vandalized Jewish homes, schools and businesses. This event only fueled anti-Semitism in Germany and would later lead to the Holocaust, where six million Jews were murdered.