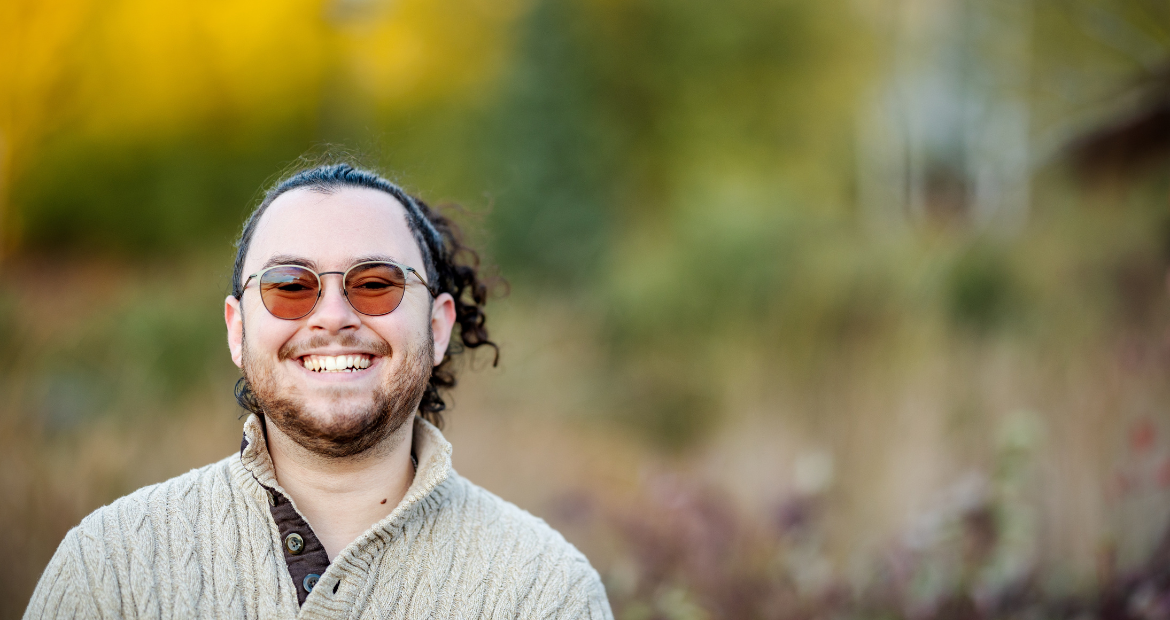 The saying goes: “two Jews, three opinions.” How do we consolidate different viewpoints within the Jewish community? For the past few years, Brother Lev Gringauz (Minnesota, 2021) has been the host of the Jews Are Tired podcast, a weekly digest of the big stories around the Jewish world, through a Jewish journalist’s analytical lens. The podcast helps listeners understand what’s going on in the Jewish community.

Brother Gringauz studied at the Talmud Torah of Minneapolis Afternoon School Program and attended and worked at Herzl Camp. “My background is not typical American Jewish. As a first generation American from a family of Soviet Jews, we’re a little bit of an outlier in terms of the level of Jewishness we retained and practiced.” As part of a Russian speaking Jewish family, Brother Gringauz’s mom is from Ukraine, and his dad is from Belarus. They both immigrated to the U.S. in the early 1980s. “They were here a lot earlier than many other Russian speaking Jews. They met here and decided to still raise a Russian speaking family, but also invest in Jewish life.”

“I have always felt out of place as a Jew in the world both in terms of the American Jewish community with my particular background in the Russian speaking Jewish community. Many of them (Russian speaking Jews) are post 90s families who immigrated here with a different context and experience than what my family went through. All these fundamental questions about where I fit in are also fundamental questions about what’s happening in the Jewish world overall. I think that curiosity and tinkering with trying to figure out where my family story fit turned into so many interesting stories. I’m personally really interested in it.”

At the University of Minnesota, Brother Gringauz started with a major in biology which had nothing to do with his interests. When applying to Minnesota he didn’t know what he wanted to do so he chose undecided and Biology because his mother told him it would be a good starting spot. “I was like, ‘Nope, I’m out’ and switched to Strategic Communications in the journalism school.” When he came back to school after a leave of absence he had already started a freelance journalism career. Interested in Journalism, Brother Gringauz changed his major again.

Brother Gringauz was rushed even before he got to campus. “I was taking a nap before going to a bar mitzvah party in the evening and I got woken up by a phone call from Daniel Kladnitsky (Minnesota, 2018). I think he was then the rush chair of AEPi. I was still half asleep and had no idea why I picked up my phone but there’s this guy suddenly talking to me about campus and his fraternity.” They made plans to meet up and work out with some other Russian speaking Jews. Fast forward, when Brother Gringauz got to campus as a freshman he got invited to the house. “I distinctly remember for Rosh Hashanah going to Hillel for services, not really knowing a lot of people and one of the AEPi Brothers saw me and remembered me. He called me over to sit down next to him. That was really comforting as a freshman to already have that community, to be able to access that and be welcomed like that. It was just a bunch of nice Jewish boys focused on education.”

AEPi taught Brother Gringauz a lot. He learned how to work with groups of people aligned towards the same goal but who might have very different ideas of what to do and when to do it. “Rallying a bunch of college guys is no easy task.” He also learned about failure and moving beyond failure. “I ran for Scribe my freshman year and I failed miserably. It was one of those times when you ran, you didn’t get it, but that’s okay. You just move on and do something else for the fraternity. There was always more to do and more to step into. It wasn’t like this is the end of the line.” He stepped into other roles for his chapter.

As Jewish Identity Chair, AEPi gave Brother Gringauz an access point to work with Hillel and Chabad. “It was really important to us to have a cohesive Jewish community and try to navigate all these differences in certain corners of the community.” Brother Gringauz saw AEPi as a middle ground that allowed him to work with both organizations to do Israel and Passover programming. He helped develop ideas behind programming and coordinate efforts. He learned to just do it and not spend time worrying about it. “It’s a really supportive environment to just grow and learn leadership.”

During his sophomore year, Brother Gringauz left school for two years to go to Conservative Yeshiva in Israel and travel to Ukraine and Belarus. During his time in Ukraine and Belarus, Brother Gringauz did a couple of personal pieces for TC Jewfolk, an independent Jewish online media organization. He wrote a personal story, reporting on antisemitism in Ukraine. He looked at some of the complexity – about the cognitive dissonance for him –  as a Jew who has a heritage there. Brother Gringauz had only been told the majority of stories of antisemitism in Ukraine from Soviet times. When he went back, his experience was that things were vastly different for the Jewish community. The community was having a very different experience and a much more positive experience in Ukraine than he expected. He also published a piece in the Jerusalem Post Magazine.

After graduation, Brother Gringauz thought that he had been freelancing for TC Jewfolk long enough and wanted to do more local reporting on Minnesota and Minnesotan Jews on a more consistent basis. “This is a community that matters to me. It’s where I live. There’s a lot of interesting stories to tell and I think there is such a need for more local focus. So much of the news we think about is national and international but we often forget that some of the most important stuff happening is in our backyards.” He contacted TC Jewfolk and asked if there was a chance to put together a part-time fellowship job to hopefully scale up from there.

One of the big pieces he wrote during this time was about the University of Minnesota which, unlike most schools, didn’t move their start date for Rosh Hashanah in 2021. “It felt like an antisemitic underpinning of the University of Minnesota. It felt like there needed to be more of a story explaining what happened here, what went wrong, how people are thinking about this, and how students were affected after the fact.” He found that there was also an opportunity to put this story in one place so that in the future, community members and the University could point to it and make a concrete road map to avoid making the same mistake. “Getting to do a story like that was really fulfilling.” Brother Gringauz also reported on Russia’s invasion of Ukraine, talking to Russian speaking Jews in Minnesota. He wrote stories of how they were working to help Ukrainians internationally through international networks of Jews. “It’s been an avenue both for really fun and in-depth local reporting but also international reporting depending on how things tie in.”

“As Jews and as people, there’s something fundamental about telling stories and telling stories about ourselves and trying to build community through that. Having a conversation and inviting the community into it is also how you engage Jews.”

Brother Gringauz’s curiosity in storytelling went beyond just writing them. He had begun tinkering with GarageBand and recording music when he was in high school, so he had some grasp of audio tech. “Originally I wanted nothing to do with podcasting because who needs another guy with another podcast. I just never thought I’d be a podcaster.” Nevertheless, he ended up pitching an idea of a Jewish news explainer podcast to TC Jewfolk. “I think there’s so much news that happens that people are writing so many stories each day. I feel like what people really need is someone to actually explain the context here, what’s happening, why is it happening, and what’s the bigger picture? Someone who can read all of the 20 plus stories that are about a specific thing and put them all together.” This was the start of the Jews Are Tired podcast.

The podcast is now entering its fourth year. It has covered everything from the Israeli Elections to Kanye West’s antisemitism. One of the most meaningful stories for Brother Gringauz was talking with a Russian speaking Jew in Seattle who wrote a book about his family’s Holocaust story. It tells the story of the family who was in southwestern Ukraine, bordering Romania, that had been taken over by Romanians. “There was sort of a very particular story there that was not very well known and was not really well told. So we talked, especially about the complexity of Jewish history and relationships in Eastern Europe, but then also becoming super big patriots of Ukraine because what Russia is doing is horrendous to the Jewish community there.”

Not only has the podcast been a service to the public, but also a service to himself by providing an outlet for Brother Gringauz to talk about certain topics that have been running through his mind. “It’s like a good avenue to force myself to just get thoughts out of my head. We have so many thoughts, opinions and feelings about what’s happening in the world and we kind of lock it up. For some people it just explodes, like your Uncle at Thanksgiving dinner.” He also feels good about providing a public service to listeners, to help them process where they fit in the Jewish world and broadly understand these topics. “I’m just grateful to be able to provide that service.”

Brother Gringauz has advice for any Brothers looking to go into journalism. “It’s really easy to be hyped up at the beginning when you think you’re gonna change the world with journalism. Then you run into the brick wall of entry-level jobs that are not necessarily that impactful. You have to focus on how you’re serving the community, also making sure we don’t sell ourselves out in the world. Editors are your friend and writing is always really hard even for the best writers.”

You can listen to the Jews Are Tired Podcast here or wherever you stream podcasts. Brothers in Cincinnati should check out CincyJewFolk and Brothers in the Minnesota Twin Cities area should check out TC Jewfolk. If any Brothers are interested in reporting for one of those communities and writing, they can get in touch with Brother Gringauz at [email protected].