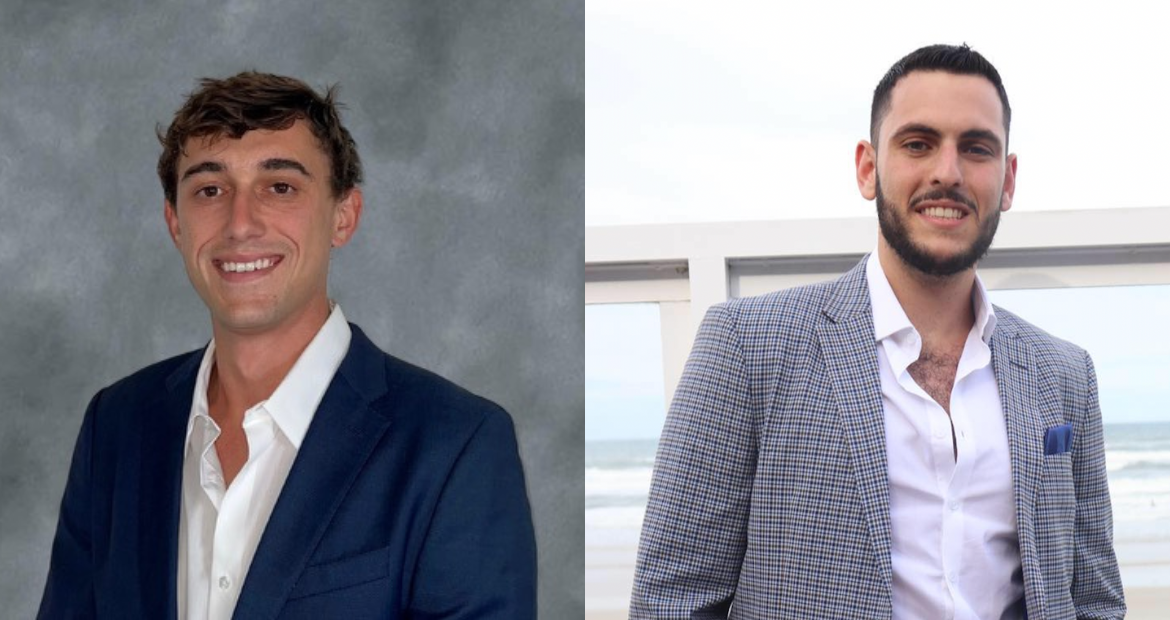 Skeptics have become increasingly critical of NFT’s (Non-Fungible Tokens), as the crypto market has taken a downturn lately. Despite that, Brother Adin Jacobs (Florida Atlantic, 2019) and Brother Ben Couris (Florida Atlantic, 2020) are still going strong, helping artists get the recognition they deserve through NFTs and the blockchain.

Brother Jacobs had a very strong Jewish upbringing with his grandfather being an ordained Rabbi. “Judaism has been involved in my life since I remember from starting at the JCC as a toddler.” Brother Couris on the other hand had a different experience growing up. “I’m what I like to call an Arnold Palmer so half Catholic half Jewish.” As he got older, his parents found that it was best for him to align more with the Jewish religion. So Brother Couris started going to Sunday school and Temple school on Wednesdays and Sundays. He also got a bar mitzvah.

Originally Brother Jacobs was going to go into healthcare administration in college  and started to go down that route, receiving his undergraduate degree in Health Services Administration from Florida Atlantic University (FAU). He went to work for Tampa General Hospital for a few years before getting an MBA with a focus in entrepreneurship. “That led me to where I’m at now with that entrepreneurial mindset.” His undergraduate degree taught him life lessons on time management and organizational skills.

Brother Couris started off as a business major at FAU and then switched to Sociology. He geared his major towards a business focus looking at workplace relationships and company ecosystems. “I had a friend explain to me to look into taking an economics minor because economics is kind of like the sociology of business. I went on to get an economics minor.” He became a new member of AEPi in his freshman year.

Brother Jacobs and Brother Couris met when Brother Couris was rushing. Brother Couris was going to meet a friend from another fraternity at the event. As Brother Couris was walking out his friend didn’t stop him, so he joined the fraternity where Brothers reached out to him. “Believe it or not, I really am an introverted guy. I can be shy before you get to know me. Rushing a fraternity was nerve-wracking for me. I did it right when I got into college. I went with which fraternity resonated or welcomed me the most. Adin was literally the person at the table that welcomed me.” The large network after his college experience was also very appealing to him. “It’s not just about those four years you’re there but it’s for a lifetime.”

AEPi quickly began playing a central role in Brother Couris’s college career. He served as Brother-at-Large when Brother Jacobs was Master and had a good experience. Brother Jacobs was social chair, lieutenant master, master and then Brotherhood chair. They learned to work together, even with their different managerial styles. “We give each other headaches and stuff but all in good fun. It taught us how to handle each other which is great because we ended up working together. If we didn’t have that experience in college where there’s a lot of buffers around, going into business together would add growing pains. It’s really melded into this perfect synergy of working,” said Brother Couris. “Working on an e-board is like operating a business. Being in the Master position really taught me how to delegate. We learned how to work with one another whether we knew it or not at the time,” said Brother Jacobs.

Brother Jacobs liked the fact that when there was a chapter problem the chapter got together and people would share things that they had been going through. “Whenever we would have issues with the chapter we would always just get together in a big room and would just all share something personal or internal, whether it was something going on with family or whatever. Everybody likes to be a tough guy. Everybody’s guard would just come down. So the next day when you’re getting into a fight with somebody, you actually remember what they’re going through,” said Brother Jacobs.

“It’s how to put on your ‘friend hat’ and then your ‘work hat’. It is realizing like there’s a lot that goes into this. We had to manage money, raise money, organize people and get people to show up to things. You’re not going to be everyone’s friend the whole time. It really taught me kind of how to separate or differentiate those two hats. I wish more people could do that rather than take things personally in business. It’s the biggest thing I learned from being on the E-board,” said Brother Couris.

Brothers Couris and Jacobs have always had an entrepreneurial spirit. “During college we were doing Dropship stores on Shopify. We sold all sorts of random stuff. So naturally when the NFT boom was happening, buying and selling and trading NFTs was just like the natural next step,” said Brother Couris. Slowly they started having people reach out to them asking about how they get on blockchain and how they make and sell NFTs. Eventually, with the industry rapidly growing, they decided to form a business out of it. “So, what we started was this unique kind of art agency that was helping artists get on to blockchain and release their NFT or their art as NFTs. It turned into a full-blown consulting job working with brands, companies and, even in some cases, governments, on how to implement this tech,” said Brother Couris. They also helped companies and other entities use the secured systems authentication. Much of their business is governed by non-disclosure agreements, That is how Modern Edge was formed.

Modern Edge focuses on emerging artists. They are working with an emerging artist from South Korea, Solwhi Park. and an artist from New Zealand, James Ulysses Finnerty. They have also gotten the chance to work with a few very high profile clients like the  Wu-Tang Clan and Empire Records. “We’re getting a chance to kind of work with all these larger entities and help our artists find jobs and gigs not only just to create work but to put on blockchain for themselves.”

“The beauty of blockchain is that it basically provides a system that can never be forged. You can never go in and change something. So, especially for a government with information that is very confidential, being able to instill that high-tech security with blockchain is very vital.”

The biggest prerequisite to becoming a client of Modern Edge, besides skill and talent, is creating art regardless of NFTs and the blockchain. The blockchain helps artists solve a lot of problems. It helps validate a work of art and the copywriting of it and creates a system for generating royalties. Artists can get a royalty every time their piece sells on a secondary market. “There’s an artist who sold a painting for $700 and 25 or 30 years later the person who bought that, resold his painting for like $80,000.

Modern Edge sees a brighter future beyond what Crypto is going through right now. “I think we’re right now going into a recession and blockchain is a want not a need. Now we’re hitting kind of like a slower point in this but flash forward three to five years from now, when the market stabilizes again, companies will be pouring dollars into web3 functionalities,” said Brother Couris.

Their end goal is to help people do what they love. While a lot of the crypto industry is about clout chasing and making a quick buck, Brother Jacobs and Couris pride themselves on their professionalism. “There are headline grabbers such as, win a Lamborghini and win a trip to Jamaica. It’s just over promises left and right,” said Brother Jacobs.

They want to be in this for the long term and really help their clients succeed. “When we started this company, we tried to do it in the most traditional way possible. We’re surrounded by advisors, mentors and people that’ll make sure we execute properly,” said Brother Couris. Transparency is key for Modern Edge. They send out weekly update newsletters about their progress, to make sure each individual client knows what’s happening. They hope that this will promote longevity in the space. “We have no intention of getting rid of Modern Edge,” said Brother Jacobs.

If any Brothers are trying to get into this space, they can either DM Modern Edge on Instagram or connect on LinkedIn and the Brothers will gladly help.