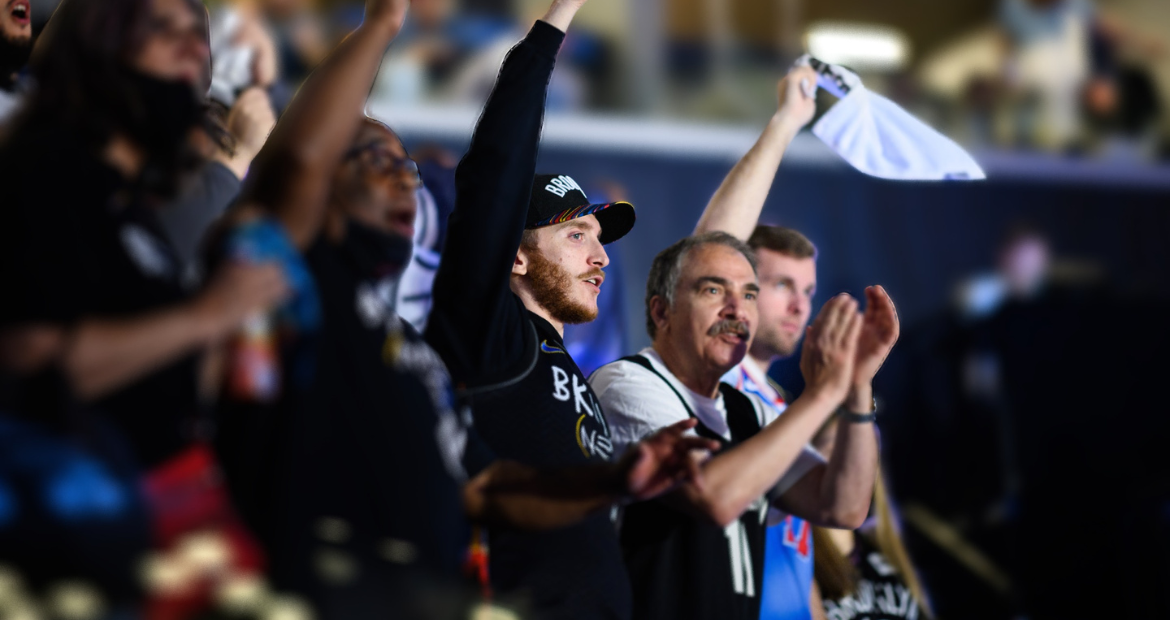 Some people are devout fans of their teams and then there are the super fans. And, somewhere beyond that is Brother Doug Bearak (Hartford, 2014) and his fandom for the Brooklyn Nets.

Growing up in the melting pot of Brooklyn and New York City, Brother Bearak has always been about that Brooklyn life. “We are very proud of things that say Brooklyn, that are about Brooklyn.” He enjoys the food, the people, and the culture.

Brother Bearak was a History major and Judaic Studies minor at the University of Hartford. During a Hillel event in his first week of school, Doug met other Brothers from the Eta Upsilon Chapter such as Eric Maurer (Hartford, 2013), Marc Ivins (Hartford, 2011), Ben Amchin (Hartford, 2013) and Steve Schultz (Hartford, 2013). They invited Brother Bearak over for a meal. “So I’m like okay, I’ll get a sandwich and get free food… Food clearly still now is the way to my heart.” He also was invited to some chapter social gatherings to meet  the other Brothers. “I wasn’t originally looking for fraternity life but I missed that yearning of BBYO. The whole idea of the Brotherhood with close friends, it really appealed to me.” He dedicated himself to the chapter through the ups and downs, jumping into roles to help others grow.

During his time in the Eta Upsilon chapter, Brother Bearak was Philanthropy Chair, Apparel Chair, Social Media Chair, Scribe, and Exchequer. He also built an early version of the Eta Upsilon Chapter website. He felt that being part of AEPi built character, confidence, and a network that is priceless.

“I met a lot of great people who I’m still in touch with down the road. I got invited to weddings. You know we are Brothers for life. It’s not with a grain of salt that you should take it”

There is one AEPi memory that is really important to Brother Bearak. Before he joined E-board, the chapter didn’t really do a lot of philanthropy programs. In 1998 his mom passed away from breast cancer, so he made a big push with the philanthropy chair to do Relay for Life and Making Strides for Breast Cancer. “Because of me, there were so many consecutive years that we attended these events. It meant so much to me that my Brothers would support me on something that was so personal and dear to me. That’s the Brotherhood I was looking for, that’s the family vibes I needed in my life.”

Brother Bearak is in a very committed relationship with his team. “A lot of people call me a Nets ambassador. People think I’m an employee of the Nets.” He is part of a fan group called the Brooklyn Brigade, a non-membership group that was organized by another fan. He joined a few seasons in. “It’s people who are loud, who chant most of the game, clap most games, stand most of the games.” The group got so popular that the Nets organization created this section called the ‘Brooklyn Block’ where they’ve added benches so they could stand the whole game. Through the highs and lows in his short time as a fan, he’s not going anywhere.

Brother Bearak has built deep relationships with some other superfans. “A family friend of mine is a super Nets fan – his name is Bruce Reznick, he’s otherwise known as Mr. Whammy and his wife is Judy Reznick who is Mrs. Whammy.” The couple is known for standing behind the free-throw line by the opponent basket and hexing them by doing hand motions. Brother Bearak would become their unofficial paparazzi, walking the concourse before fans were let in because Mr. and Mrs. Whammy had access. Of course he would also get to walk courtside, take videos, and meet the players and coaches. “People thought  that I was their grandson, but no.” He would tweet the ‘Whammy Vision’ perspective walking around Mr. Whammy’s interactions. “It’s very heartwarming.”

Some Nets fans even impress Brother Bearak. “I respect them but they stay up whatever hour to watch, whether it’s first thing in the morning, normal time, afternoon. We have fans in Australia and all across Europe.” Brother Bearak was so passionate that he stayed up late in the Netherlands to watch a game.

The Wingspan Podcast is a sports podcast that Brother Bearak created. It has about 50 episodes in which he and his co-host host people like former Nets executives, professional athletic trainers, media members and former NBA, ABA, and MSG League players. “I had the former Borough President, Martin Markowitz, come on. He put Brooklyn on the map. He is Mr. Brooklyn and helped the Nets come to Brooklyn. He’s a big part of what Brooklyn is today.”

Like AEPi, Brother Bearak has found community in the Nets fanbase, or as he likes to call it a “NETSwork”. “It highlights how much growth I’ve made from the kid who wouldn’t really talk, wouldn’t really go out or anything. I’m still not a social butterfly, but you’ll see me at the next game and you’ll be like,”Yo Doug you’re crazy.’” Even when the Nets aren’t playing, you can catch him at Barclays cheering on the New York Liberty as a season ticket holder.

“If Brothers want to come to the Barclays Center, I’m easy to find. Hit me up!”

If you want to get in touch with Doug you can reach him on his Instagram or Twitter at @dbearak.