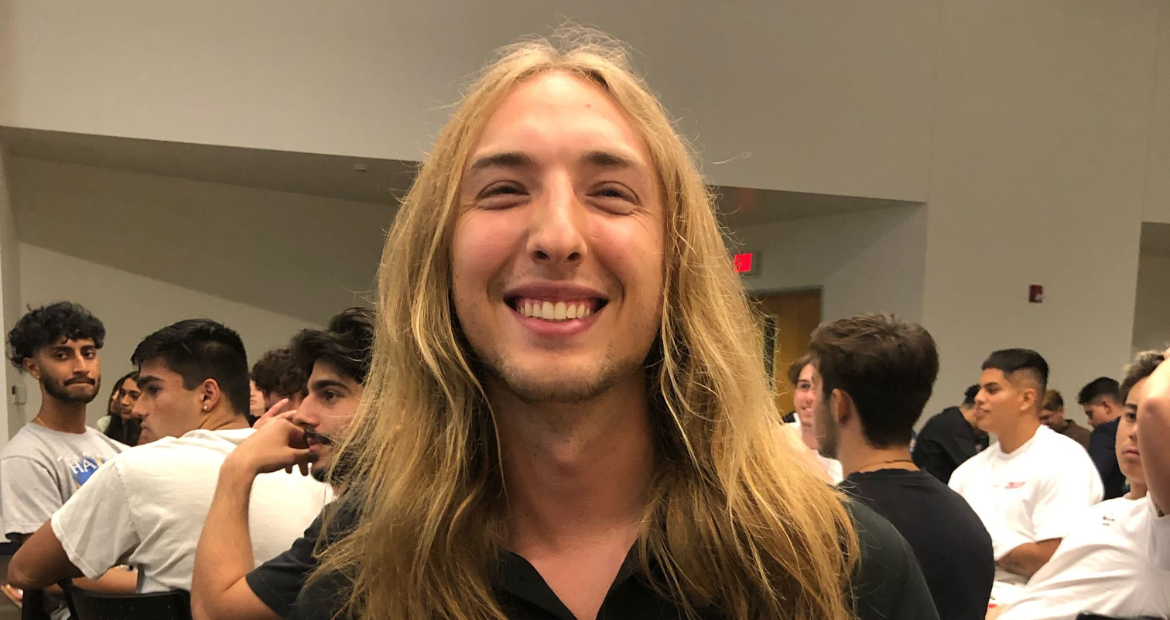 Sun Tzu once said, “Opportunities multiply as they are seized.” Brother Samuel Lewis (UC Riverside, 2022) has seized the most opportunities he could in Greek Life at the University of California Riverside (UCR). Ultimately, he would go on to be inducted into the The Fraternity and Sorority Involvement Center (FSIC) Hall of Fame for his work.

Brother Lewis, a northern California native, distanced himself from his Judaism after his Bar Mitzvah but that changed as a result of AEPi. “I made it (his Jewish heritage)  part of my identity at that part of my life.”

At UCR orientation, Brother Lewis was looking at a club and his mom dragged him over to the AEPi booth. “There are these guys with these Nike T-shirts on that said ‘Just Jew It.’ I thought it was the stupidest thing I had ever seen but I ended up giving them my contact info.” They ended up contacting him the first day and invited him over. He fell in love instantly and knew from the first week that it was for him. He would go on to hold most minor board positions including social chair, social media chair and rush events chair. He also was elected scribe. The winter after he rushed, he was also the Interfraternity Council (IFC) delegate because the position needed to be filled.

It was the middle of the “me too” movement and there was a woman on twitter who was publishing anonymous sexual assault stories at UCR. Luckily there weren’t any AEPi names but  the IFC President decided to create a position to respond to these allegations and to make the Greek community safer. Brother Lewis was the second person, to serve in this position. ”Its based off Brothers and Sisters Against Violence (BSAV) and its their job to do sexual assualt workshops.”

Brother Lewis’ job was to work with BSAV and IFC. The immediate response of IFC at UCR was that every fraternity had to be BSAV certified which means they sit through two presentations a year and undergo the sexual assualt training. Brother Lewis thought that the presentations were ineffective, and that it was a good idea but just hated how they were done. “I was hoping that if I was able to get involved I could do something other than the presentations.” He wants to create an officer description for the position and to create more involvement with the Title IX office for the person who takes over after him.

His most notable AEPi memory was calling his mom after elections, after he had just been elected chapter Master for the first time. “I was crying on the phone and remembered so vividly talking on the phone. I wasn’t expected to win and felt like all the more that I ended up being Master. It was a really emotional thing for me.” Being a leader pulled him in every direction. It was the first time in his life where he had such leadership responsibilities. “I don’t know how I would’ve done if COVID didn’t happen. It gave me a grace period because no one could judge what I was doing because it was all brand new.” Brother Lewis served as master for two terms and was master as the campus came back in-person. “It’s so incredibly fulfilling but at the same time it’s tough. It was really difficult emotionally and physically.”

Near the end of the 2022 school year, Brother Lewis was nominated to be in the FSIC Hall of Fame. Brother Lewis, along with two others were chosen for the honor; all had worked in some form with BSAV. “I think I would’ve been a little disappointed if I hadn’t won it. Totally a vanity thing,”

“I think that I got more out of AEPi than most people do. It entirely defined my college career and gave me skills that I wouldn’t have been able to attain at this point in my life. It’s given me opportunities to be involved with the school in a different way. I learned how to manage an organization and how to deal with crises and work with COVID.”

“Get involved with IFC. There are positions that no one wants to fulfill. My very first position, I was the delegate for IFC. They would just shove it (the position) on the freshman that was closest to the building. It’s something that nobody wants to do but it’s the easiest thing to just say yes and get involved where you can and be appreciative of it.”