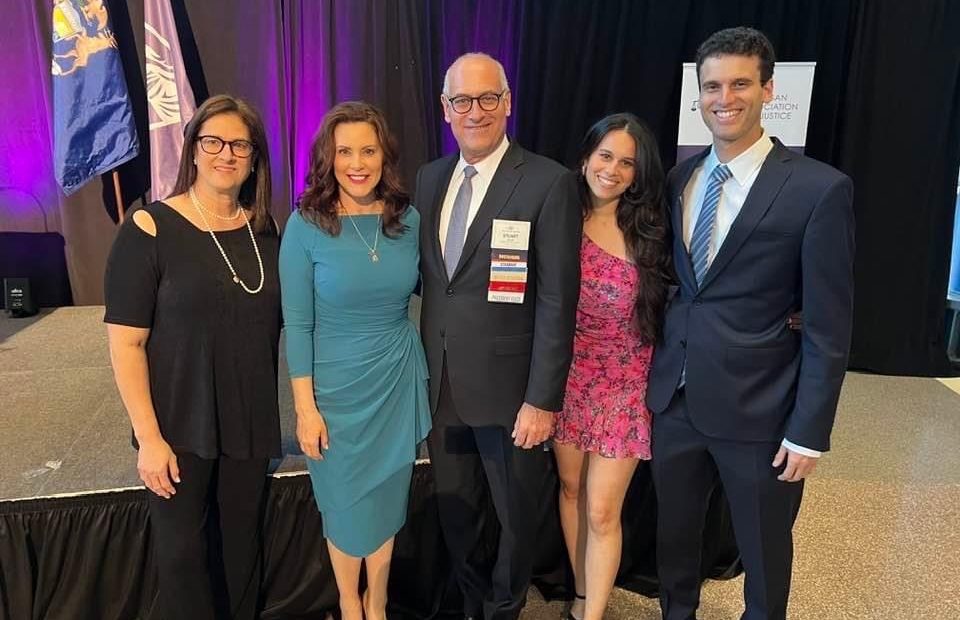 Leaders don’t create followers. Leaders create other leaders. It is not only about what you can do for yourself as a leader but how you can pay it forward. As the new president of the Michigan Association for Justice, Brother Stuart Sklar (Michigan State, 1982) is paying forward the leadership lessons that he got at AEPi and other places to create other leaders within the judicial system.

Brother Sklar grew up in Farmington Hills, MI and belonged to a reform Jewish congregation. Celebrating all the holidays, he had a Bar Mitzvah, went to services, Hebrew school two days a week and was active in AZA and BBYO. “It was a very warm and loving Jewish house that I grew up in. My grandparents always had a presence in my life and emphasized Jewish values and my parents as well. It was a good Jewish upbringing.”

His father, an alumnus Brother from Wayne State, told him that if he gets a bunch of guys together to come and listen to some people from AEPi, he’ll buy the pizza. Brother Sklar was in, so he got a group of his friends over and AEPi alumni talked to them about restarting an AEPi chapter at Michigan State. “There were four of us that started things off and we didn’t have a house. We all lived in our dorms. We started recruiting guys and by spring term, by the time softball season started, we had enough guys to field a team.” That year they went undefeated in the fraternity softball league. Brother Sklar became the first President of the reformed Chi colony and led them through the whole process at Michigan State in getting their charter. He ultimately went on to become president of MSU Hillel for two years “The leadership experience that I got from AEPi has carried on with me throughout my life.”

During Brother Sklar’s junior and senior year the chapter got a house, had grown to 50 Brothers and received its official charter from AEPi International. To this day, some of his closest friends are people he was in the fraternity with including the three other Brothers he started the chapter with.

One of Brother Sklar’s favorite AEPi memories is when George Kell, the Detroit Tigers television announcer and Hall of Fame baseball player, came to speak to the Brothers. All the Brothers in the fraternity loved him. “We invited him to come to the fraternity house and we never thought that in a million years that he would come and he showed up. It was like the single most attended event that we had in the fraternity. It was the highlight of the year. He was so nice. Then he talked about us the next day on the Tiger broadcast. He and Al Kaline talked about visiting the fraternity house and it was great. That was unbelievable.”

Another one of his favorite AEPi memories was when his son, Alex Sklar (Michigan State, 2015)  joined the chapter. “He used to hear my stories all the time. He said when he started college that he wouldn’t join the same fraternity. He ultimately did, but not because I pushed him. Just like my dad was there when I got initiated, I was there when my son got initiated. That was a very special moment for me, after all those years of me being in the fraternity.”

As an undergrad, Brother Sklar learned how to interact with people and how to run an organization. “I learned that when you are with a group of people with common goals and common objectives and you’re all working towards the same thing, you learn how to navigate through it.” He also learned how to budget, compromise and make things work.

When Brother Sklar began contemplating going to law school, the fraternity was where he turned for advice. “Brother Mark Himmelstein (Tennessee, 1969) was a lawyer in the department of justice and I remember having a conversation with him and that kind of put me over the edge of wanting to go. I would say that the people in leadership of AEPi had a little something to do with it.”

As an attorney, Brother Sklar specializes in fire, explosion and property damage cases. He became a principal member of the National Fire Protection Associations Technical committee on fire investigations which wrote the standards on the qualifications one needs to be a fire investigator and wrote the guide on doing fire investigations. “I’ve been on that committee for 20 years and I’m still on the Fire Investigator Professional Qualifications Committee. As part of all of that I was giving speeches all around the country and handling fire cases, ultimately taking the certification exam and passing.”

He currently works for Fabian, Sklar, King & Liss Property Insurance Law Firm and has seven lawyers who are very specialized at handling property insurance cases for people who have had a claim. They are recognized as the experts in this field in the state of Michigan and in the country. “We have done a lot of training for state and federal prosecutors, the Justice Department, the Bureau of Alcohol, Tobacco, Firearms and Explosives ATF, the Detroit Fire Department, the Michigan State Police, the National Association of Fire Investigators, and the International Association of Arson investigators.”

At his firm, Brother Sklar hired a Past Master from the Wayne State chapter, David Zemon (Wayne State, 2011) who clerked for his firm for a couple of years. “That was paying it forward, because when I was in the fraternity as an undergrad, there was an alum from the 60s before the chapter folded, that I worked with for a summer in New York. It’s coming full circle that I was able to do that for someone.”

Brother Sklar joined the Michigan Association for Justice (MAJ) out of law school as a young lawyer. MAJ advocates for those who have been injured and have suffered harm, injured in accidents, fires, explosions, employment cases, and to seek justice in the civil justice system. They advocate to preserve the right to a jury by trial in civil cases, promote a fair balance and diverse bench, make recommendations to the governor and judicial appointments, and lobby the legislature on laws that protect the rights of those who have been injured. Over the years he has gotten more involved and he became an officer five years ago.

This June, Brother Sklar became president of MAJ and he has hit the ground running creating future leaders. He is starting a leadership academy to take young lawyers and train them to become leaders, not only within MAJ, but leaders in the community whether they want to become judges or legislators or other leadership positions. That leadership academy will start this August.

Brother Sklar is also busy getting ready for the state elections happening in November. “We have candidates who are aligned with our mission regarding the ability for our clients to be able to get justice. We support those candidates, raise money for those candidates, for both statewide office and in judicial races.” The leadership academy and the elections are the two things that take most of his time as president right now.

“It’s one of the greatest honors and privileges of my professional career to be entrusted with the leadership of the organization that has some of the best trial lawyers in the state if not in the country that are members.”

“A lot of people are afraid of leadership, and are afraid of the responsibility that comes with it. They are afraid that maybe they are going to have to do things that are not popular. Don’t shy away from it. It teaches you a lot of skills that you are going to use later on in your life. Try to work with however many people you have in your chapter. Not everybody is going to agree with everything, so you’re going to have to learn how to compromise and rally the troops behind a common goal. Those are really good life skills.”