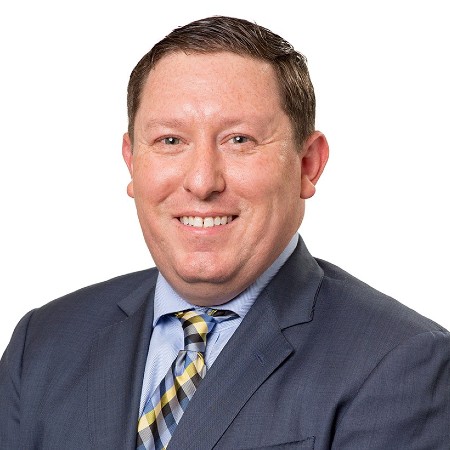 Tomorrow (Saturday, August 13), Brother Scott Knapp (Florida State, 2002) will be installed as the 76th Supreme Master – International President — of Alpha Epsilon Pi. It might appear random or almost lucky that a Cincinnati native attended college across the country at Florida State and joined one of AEPi’s smallest chapters and, 20 years after graduation, is on the verge of being installed as the fraternity’s highest officer but, as it is said, luck is what happens when preparation meets opportunity.

“Growing up in Cincinnati, it is fair to say that attending Florida State wasn’t really on my radar. I was interested in politics and law and one of our neighbors was a University of Cincinnati political science professor and he told me that I should look at colleges in a state capital because there would be great internships and I would have a lot of opportunities.”

“That made sense to me so I had three criteria when looking for colleges: I wanted them to be in state capitals, have a good Jewish community and it should feel like home.”

And, in stepped some of that random good fortune which began the road to Brother Knapp’s ascension to the fraternity’s highest office.

“My parents and I were visiting Florida State and we were on a tour being given by a woman in the university administration. She happened to be Jewish and on the FSU Hillel board. Immediately, my parents and I were more comfortable with the Jewish community.”

And, then, another random stroke of good fortune.

“While we were walking through the student union on this tour, I saw this big tall guy wearing a shirt with big block AEPi letters and my dad said to me, ‘there’s a Jewish fraternity here’ and that made him feel more comfortable. I didn’t think I was interested in joining a fraternity but it remained in the back of my mind.”

That AEPi Brother was the then Phi Tau chapter master, Stu Rubin. Brother Rubin began recruiting Scott right at that moment. “He told me about the chapter and that it had just started and, somehow, he knew just what to say to me. He told me that the chapter was relatively young and was small but that meant there would be leadership opportunities for me. He told me that the Jewish community in Tallahassee had embraced the chapter. He was hitting all of my points.”

Brother Rubin, standing in the student union talking to a high school senior, told the future Supreme Master that the Florida senate minority leader, Steve Geller, was an AEPi Brother and might be able to help him. Just like that, all three boxes were checked and Scott enrolled that fall at Florida State University.

“I spoke to Stu a few times over the summer and when I moved in, some of the Brothers came in and helped me move in. I got a bid right away and began my AEPi career.” The Phi Tau chapter at the time had only 14 members. My pledge class had 11 initiates, so we were already growing. By the end of my four years in school, we were initiating 30 guys a year.”

“Somewhere along the line, I met with Brother Steve Geller and got a lesson in the networking power of AEPi. He had no opportunities for me but introduced me to his colleague down the hall, another Jewish legislator, Debbie Wasserman-Schultz, and I interned for her for two years while in college.”

Quickly becoming a chapter leader, Brother Knapp was elected Lieutenant Master and then Master in his sophomore year and served in that role for two years. He attended his first international convention in 2000 and got a taste of the international fraternity. “I went to every convention after that and ended up running for Undergraduate Supreme Governor and winning, beginning my service on the Supreme Board of Governors (SBG).

After graduation, Brother Knapp stayed active in AEPi’s volunteer leadership while in law school as the chapter advisor for AEPi chapters at the University of Miami and Florida International University. He took a few years off while building his career as an attorney in the South Florida area (today, he is a litigation partner in the Fort Lauderdale office of Nelson Mullins Riley & Scarborough). But, then, AEPi called again.

“I think Andy Borans called me and asked me to come to a convention a few years later and I got appointed Regional Governor.” After running for the SBG in 2012, Brother Knapp began his ascent to becoming Supreme Master. With a commitment to building Jewish leadership, Brother Knapp has also served on the International board of B’nai B’rith and has traveled internationally on behalf of both organizations, meeting with young Jewish leaders.

Now, on the precipice of serving AEPi as the 76th Supreme Master, Brother Knapp has started to lay out his agenda for AEPi moving forward but he has already broken barriers for AEPi as he will be the first openly gay Supreme Master of AEPi.

“My goal is to work to change our processes and to make it more brotherly. I want to find more talented Brothers to serve on our boards and get involved. I know that these last two years with COVID have been difficult for all of us but we’re finally moving forward. We’re going to rebuild our chapters and keep growing and improving.”

Luck is what happens when preparation meets opportunity.

AEPi is lucky to have Brother Scott Knapp leading our fraternity.