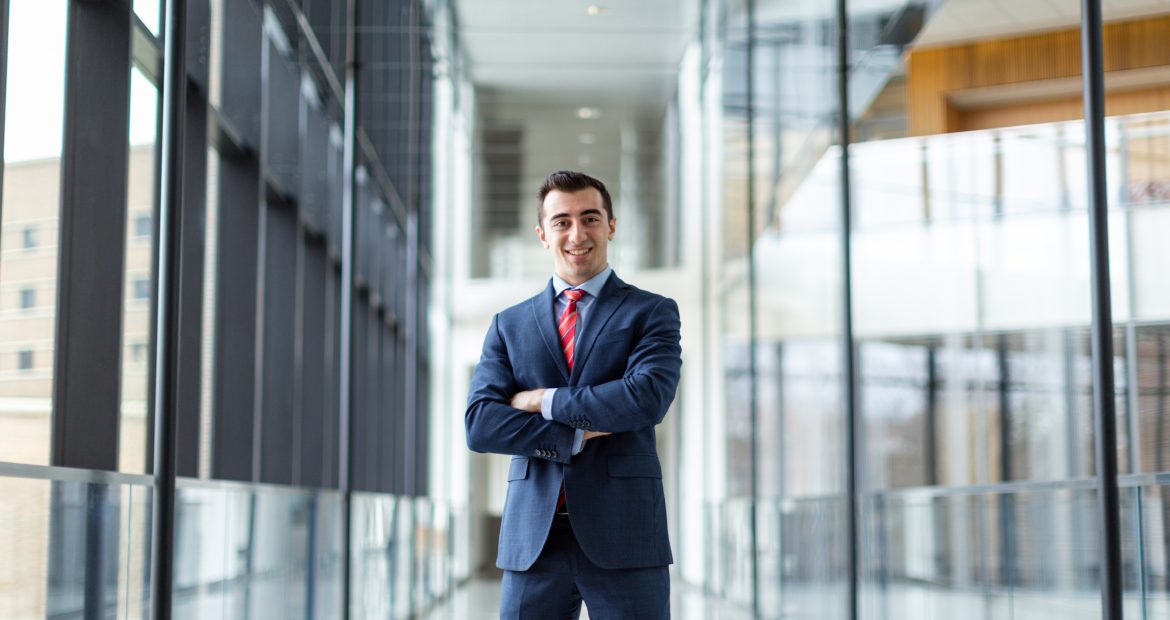 Steve Jobs once said, “Design is not just what it looks like and feels like. Design is how it works.” Brother Jason Israilov (Michigan State, 2022), the co-founder of Empyre Webs, a software development company that helps businesses create a unique online presence, has taken that statement to heart. Recently, the company was a semi-finalist in the Burgess New Venture Challenge, an entrepreneurship competition.

Brother Israilov grew up in a Jewish area in suburban Detroit and attended Sunday school and Monday night school. He was very involved in religious school and became a part of NFTY, among other organizations. Even after his Bar Mitzvah he was still very involved. “I didn’t attend a religious high school, but I was still very involved in the large Jewish community. All my friends and my family who went to the Jewish high school stayed closely connected.” He was a teacher assistant at his local synagogue, Temple Israel, for four high school years, supporting teachers and teaching kids in Hebrew school for younger ages and was a camp counselor for two Jewish camps at Tamarack and the JCC Day Camp.

At Michigan State University, Brother Israilov majored in computer science with a minor in cyber security. He joined AEPi knowing Brothers from camp and from the community, and he knew that they were a great group of guys. “Coming to Michigan State, I wanted to stay connected and there was no better group than AEPi.” As soon as he got on campus, he got a text from some of the Brothers. The Brothers that he knew from West Bloomfield introduced him to guys that he didn’t know from out of state. “I really got to network with a lot of people and a lot of Jews from places like Colorado, California, New York, Chicago and even out of the U.S.”

After initiation, Brother Israilov took on a few positions. On minor board he was academic chair, contributed with the chapter website, and sat on various committees. He then decided to join the executive board and became the Lieutenant Master of his chapter. “I’ve learned so much from the fraternity. The biggest thing is the support network. Through the good and the bad you really see it in all aspects of things. When one of the Brothers lost a family member due to an illness, we were all there for him. We changed our philanthropy to support him and his family.”

“We know that whatever happens in our lives we are always there for each other.” Even over the summers he got calls and texts from the guys and stayed in close contact.

Brother Israilov’s favorite AEPi memory was going to the AIPAC Policy Conference in 2020. He enjoyed the AEPi reception where AEPi alumni and undergrads from all over the country and the world were all in the same room. “It was amazing! It’s just knowing wherever I go, whoever I talk to, the AEPi Brotherhood is just so huge. Whether we went to the same school or not, whether we were new members together or alumni, it’s a strong community bond.”

In April of 2020, right when the COVID-19 pandemic hit, Brother Israilov and his best friend were starting their business. “We had truly great mentors who are serial entrepreneurs and have a lot of successful businesses already. They said that in these times of uncertainty it’s really good to start something new that you’re interested in.” After playing around with all different types of ideas they decided to create their own software development company, called Empyre Webs.

Since starting the company, Empyre Webs has grown not only to have in-house developers but has also acquired a large variety of clients such as hotels, restaurants, and non-profits. “One of our notable clients, BasBlue, is a Detroit non-profit organization dedicated to building authentic connections and amplifying opportunities for women.” Empyre Webs has built a fully functional website for BasBlue using its own content management system (CMS). Among other features, the website offers a membership portal which allows users to create their own profile, connect with other members of the organization, and register for community events. “It’s one of the coolest projects to work on and great to support of their overall mission.”

With most CMS systems, you choose a website template that looks similar to the template that other competitors are using. Having a unique website is important for a business to stand out from the competition. “We developed our own version of WordPress. That speeds up the development times for our clients and gives them a more unique custom website experience.”

Brother Israilov entered their new CMS into the Burgess New Venture Challenge. Competing for a pool of $44,000 in investment money, the challenge is a Shark Tank like pitch competition for entrepreneurs at Michigan State University. Young entrepreneurs pitch their idea, their company, and a new innovative technology. After months of pitching, Empyre Webs was one of 15 semi-finalists. Although they didn’t win, they received $500 in investment money that will be reinvested into the company. “The biggest thing was that we networked with a ton of people there and were able to meet new clients and the successful judges.” In fact, Brother Israilov gave out over 80 business cards, and has now accumulated additional clients.

Along with learning from mistakes, Brother Israilov has advice for up-and-coming entrepreneurs. “Being an entrepreneur is a full-time job and you’re going to feel overwhelmed with all the work that comes with it but take a step back. Look at the vision and remember that this is something you really want to do as an entrepreneur and you’re making a difference for people. The biggest thing that keeps me going is that I love what I’m doing. It doesn’t feel like work.”

“It’s super helpful to network with other Brothers from the Facebook and LinkedIn groups. You can meet so many interesting people in AEPi who can share their diverse perspectives and ideas. There is so much to learn from their stories, experiences, and mistakes. Brothers are always happy to provide mentorship or connect each other with someone in their network to help you succeed.”