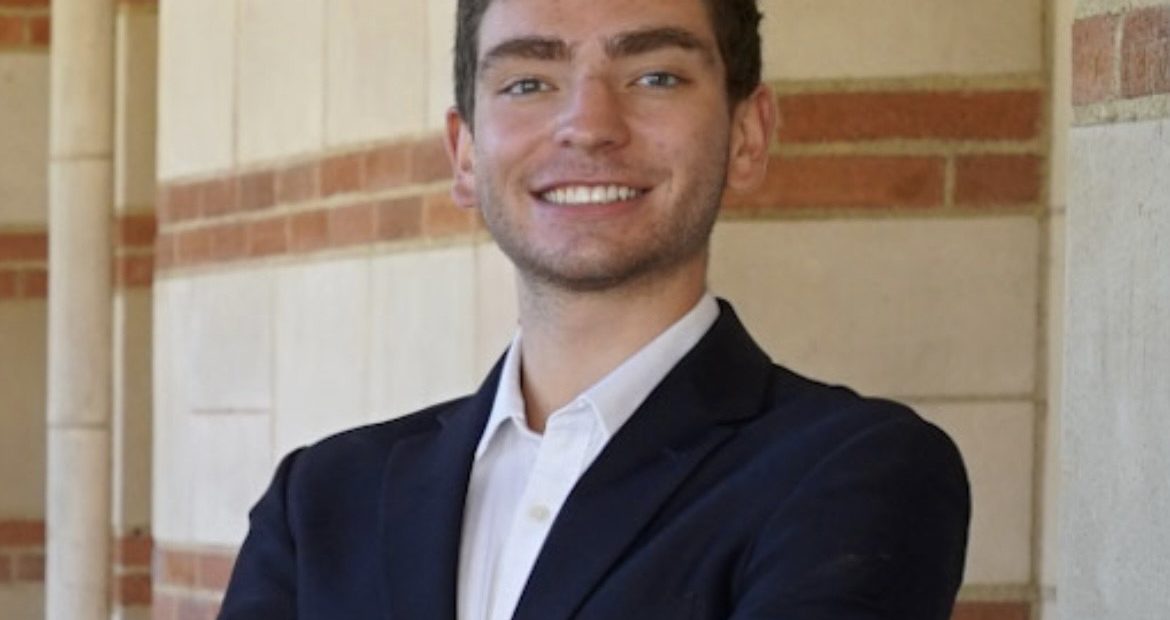 As Chief Justice of the University of California – Los Angeles Interfraternity Council (IFC), Brother David Sutherland (UCLA, 2023) is using his leadership abilities and resources to raise money for Ukrainian refugees.

Growing up, Brother Sutherland was raised as a reform Jew in Northern California. He went to Jewish preschool and to Hebrew school from kindergarten through eighth grade. He had a Bar Mitzvah and stayed involved in Jewish organizations through high school. “I lost touch with my Jewishness after having my bar mitzvah. After high school I decided that I wanted to rediscover that, so I joined AEPi.”

A philosophy major at UCLA, Brother Sutherland is writing research papers on legal philosophy of privacy. He plans on applying to law schools in the fall. When he entered college he had zero intention of joining Greek life his freshman year. “UCLA is an academically rigorous institution and I was worried about getting good grades.” At UCLA orientation over the summer, he met a few Jewish people there and one of them had been invited to AEPi to hang out with the guys for an evening and invited Brother Sutherland as well. “I decided on the spot that I wanted to rush and that AEPi was my number one.”

AEPi taught Brother Sutherland how to balance life’s commitments. The chapter has a 3.8 GPA, the highest GPA in Greek life at UCLA. “A life of school work on repeat is just not a very fulfilling life. They (AEPi Brothers) provide the other aspect of it, which is here are guys that you can really enjoy hanging out with and de-stress with. Guys that will push you both academically and professionally, but also are going to be there for you when you need a break from it all.”

Brother Sutherland was on the rush committee and not on Eboard or minor board before running for chapter president. “I won, which was crazy. I gave it my all and was really happy with how that went.”  During that fall rush the chapter signed a 30 man new member class, the biggest class in years. “We just rushed it on all cylinders, got the quality, got the quantity.” Brother Sutherland would then go on to become Chief Justice (President) of the UCLA Interfraternity Council (IFC), one of the largest Greek systems on the west coast.

Brother Sutherland was super close with his mom’s parents growing up and even still to this day. He was raised on stories of what it was like in the Soviet Union. He’s always felt particularly close to Ukraine, so in February when Putin’s Russian army invaded the town that he’s from – Donetsk – that really hit close to home. “My grandma’s school got bombed in the first week of the invasion.”

When Brother Sutherland was choosing a philanthropy for the IFC Philanthropy, he wanted to choose a charity that would help support Ukraine. He went through the charities that his temple had already endorsed and found the Hebrew Immigrant Aid Society (HIAS), an organization providing humanitarian assistance to Ukrainian refugees fleeing the invasion. “I double checked with my mom that those were the same people that brought my family to America.” Since then, he has raised $2,000 by himself and the IFC Philanthropy has raised over $27,000. He is still looking to raise more, with the goal of reaching over $40,000.

To support Brother Sutherland you can donate at https://us-p2p.netdonor.net/923/personal-fundraising-campaign/119509/david-sutherland-hias-fundraising

« Brother Alex Lane (Purdue, 2024)
VOICES: I Never Thought I Would Be a Role Model Because of Who I Am »