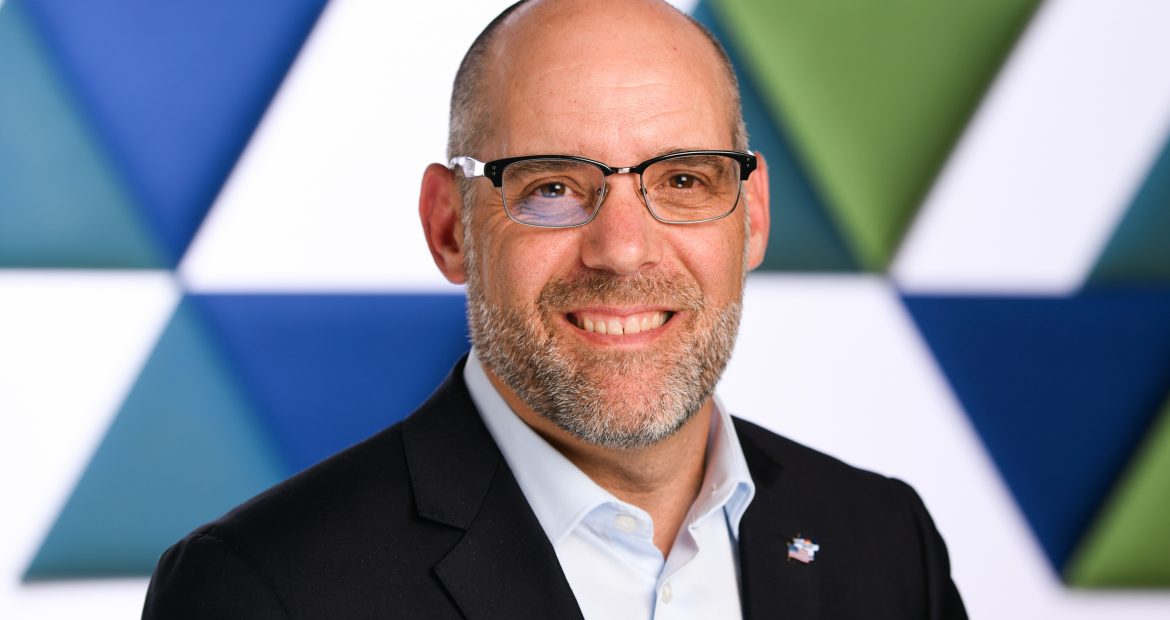 In times of isolation such as a pandemic, community is especially important. Brother Rabbi Jay Strear (Colorado-Boulder, 1992) is building community in Colorado as President & CEO of JEWISHColorado, which is the result of a merger between ​​Allied Jewish Federation of Colorado, the Colorado Agency for Jewish Education, and the Jewish Community Foundation of Colorado.

Brother Strear is a fourth generation Coloradan and Denverite. “I grew up in a highly affiliated home, we went to a traditional congregation. It was really my second home. My grandparents helped found the congregation and my parents were very involved.” Brother Strear was also very involved in BBYO, spending his junior year of high school on a kibbutz in Israel.

After high school, Brother Strear went to the University of Judaism, known today as American Jewish University (AJU). He had a great academic experience but a limited social experience with 29 undergraduates. Moving back to Colorado, he transferred to the University of Colorado – Boulder and majored in English literature. “A buddy, who would become a Brother of mine, a close friend of mine from high school, was also moving to Boulder after his freshman year elsewhere.” Brother Strear and his friend were not interested in rushing. “A number of our friends were running the AEPi house and it was a natural destination for us.” They found that the social experience that they had come to enjoy in BBYO continued in AEPi.

Brother Strear found that AEPi was the center of the somewhat limited Jewish life on campus. He would go on to be chapter Vice President, and would eventually form the Jewish Student Union on the Boulder campus which included AEPi, AEPhi, and Hillel. He established the Israel Action Committee on the Boulder campus, bringing in other community organizations. In 1990, Brother Strear was the recipient of the Sarah Lee Pollack award that went to an outstanding college student leader.

“The basics of collegiality, teamwork and Brotherhood, those early lessons shaped so much of what I do professionally today. It’s seeing that our purpose is much broader than our individual needs.”

After graduating from Colorado-Boulder, Brother Strear went to graduate school for Nonprofit Management at AJU. “I decided because of all those experiences, that stemmed back to my experiences in Boulder and AEPi and this award that I got from the Federation in Denver, ultimately led me to graduate school.” He went on to become ordained as a Rabbi at the Ziegler School of Rabbinic Studies. “I thought if I could be trained in nonprofit management and be ordained that I would be able to chart my own course. I didn’t necessarily envision a career in the pulpit rabbinate.”

Following his ordination, Brother Strear went on to carve out a role for himself at AJU, eventually being named Chief Advancement Officer and Sr. Vice President. When the CEO position at JEWISHColorado became available, he was selected for the position and became one of three rabbis in the Federation system at the time. “It’s been a blessing for me. I get to dabble in a lot of different things from a non-profit management standpoint as well as a rabbinic standpoint and it’s been very fulfilling.” In his role, he has to focus beyond just his organization. “What are the community needs? What’s the collective needs? What are the people’s needs?”

“The concept of community is critically important. The challenges we will face can be solved with empathy and in relationship. AEPi and what Brothers experience flexes, deepens, and strengthens that empathy muscle, the ability to identify with somebody else’s experience. There is nothing more valuable in the Jewish and global community than a sense of empathy. It’s something I hope that AEPi will continue to strengthen, support and invest in.”

Brother Strear also wants to send a message to Brothers facing antisemitism on campus. “If you aren’t willing to show who you are, then you’ve capitulated. You’ve handed over victory to those who would like to see us disappear or fade into the woodwork. You’ve surrendered. Step forward. We have to speak with a loud clear voice of who we are and what we stand for. It’s not only good for the Jewish community, it’s also good for American democracy.”

“I think I can look back and say that my career thus far has been meaningful and impactful on the community.”