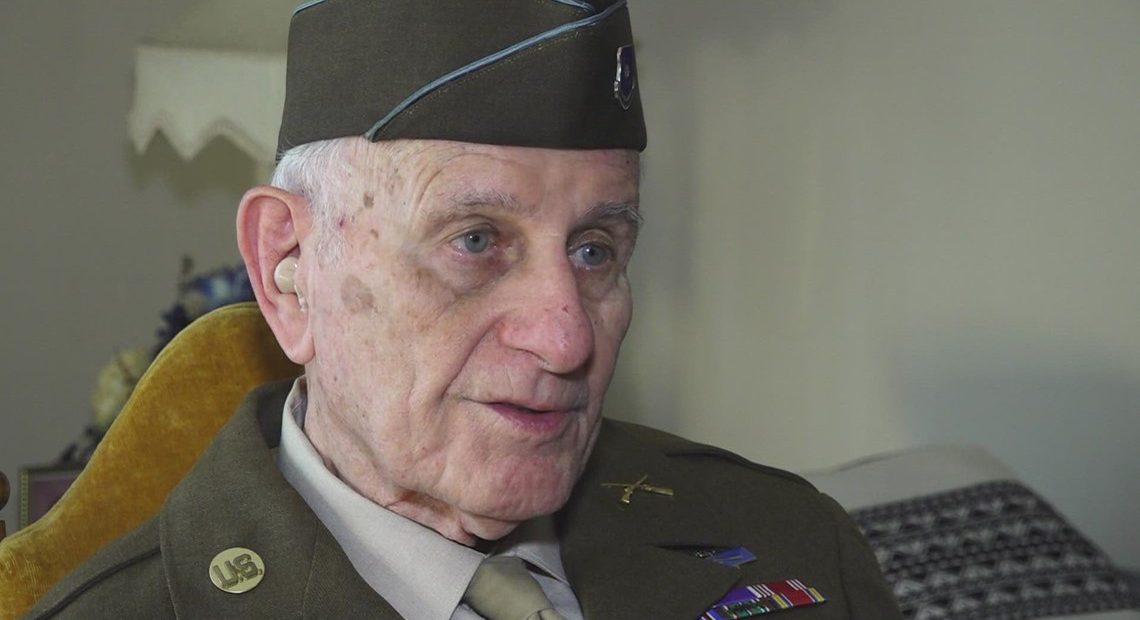 The Purple Heart is a United States military decoration awarded in the name of the President of the United States to those wounded or killed while serving in the military. As a veteran of World War II, Brother Robert L. Sabetay (Akron) is a recipient of the purple heart.

I’m Jewish and I was in the 773rd field artillery in the U.S. Army. I went overseas with the 773rd. The war started on June 6, 1944. On July 18 of that year, we went into Normandy and eventually went into France. I was in France and then in Belgium, Luxembourg and all the different countries. Before Christmas day they needed replacements.

Before we went overseas, when I was in the U.S., every time  I had a furlough home the Lieutenant Colonel would take me on the Louisiana Maneuvers so I couldn’t make the furlough.  He did that twice to me. I never had a furlough home. He always kept me a Private. I was kind of fed up with everything and I always wanted to be in the air corps. They were taking tests for air cadets and I heard about it so I took the test and passed everything. I became an air cadet and as soon as he (the Lieutenant Colonel)  found out I was an air cadet, he took me on the Louisiana Maneuvers so I wouldn’t make it. Finally, two weeks later, they caught up with  me and I became an air cadet. I had gotten into the air corps, which I loved. Then they found out I had sinus trouble so that meant I couldn’t fly. So, they shipped me back to the artillery.

When I got in the artillery, I wanted to be a radio operator. I liked that job. Some guy stated they were going to put me in a machine gun section. I’m a nice Jewish boy, what do I know about machine guns? There was a kid who wanted to be in the machine gun section and he was in the air corps so I talked to someone in headquarters and they transferred me. I was in the radio section again, which I liked. I enjoyed the job.

As soon as I got in the infantry they made me a Private First Class (PFC) and I was in the infantry for a while. They wanted me to take over a deceased Staff Sergeant’s job who was in charge of a platoon. I said, “I don’t want to take that job because we had eight staff sergeants and I didnt want to be the ninth.” I should’ve taken it. I was a radio operator up there with them. They got someone else from another outfit to take over, he was only a buck-sergeant and I was still the radio operator.

When he took over, once we went into battle and he said go up and find L company. I asked “Where is L company?” and he said, “That way”. I walked for 10 minutes and I couldn’t find L company. When I came back he gave me hell. He sent another guy out to find L company and he was back in 3 minutes. So I knew there was something fishy, maybe antisemitic, I don’t know. I didn’t like him too much.

We went into battle against the Germans and I was a radio operator. We were up on a bald face hill. I was with the Buck Sergeant who was head of the platoon. We had tracer bullets going over our butts from two different directions. So I said, “Come on, Sergeant, we gotta get out of here and take our objective.” He said, “No, I’m going to stay here.” I replied, “You’re going to stay here on a bald face hill with tracers going over your butt from two different directions. If you want to stay, you stay, but I’m leaving to take our objective.” And, I left him.

I was following another soldier who was running in front of me and someone had him zeroed in, with their German rifle and were popping bullets at his feet, but he was outrunning it. So, I kept following him until I came to a drop off. I dropped down six feet. I had the radio on my back and it bounced. Then I saw the German in front of me and he was carrying his Schmeisser machine pistol, like a machine gun. I started trailing after him, I was going to try and shoot him but it was hard because we were running full-tilt down the hill.

We came to this house and he turned left, went into the house and was in the kitchen. I ran after him and I got in there. I chased after him, and he ran towards the door. He was getting to the door and then I decided that I didn’t like running this way. I had to go through the door but he might have shot me. So I ducked into the front bedroom. As I ducked through the bedroom, he went through the door and put circle machine gun holes through the wooden door that went down the aisle but I wasn’t there. I eventually went through the door with the circle holes and he wasn’t there. I couldn’t see him anymore. But, across the aisle was a small barn with American GIs in it. So, I went in there and they were shooting at the Germans.

I then entered the barn and they sat me down as a radio operator immediately and put my radio outside with a lead into the house where I had a transmitter. The Captain went in through the window at the other end of the barn giving counterfire. I started radioing in, and he was calling out how many yards the guns were.

We were doing pretty well and then all of the sudden a great big bomb shell came in and hit the end of the house that was 30 feet from us. We were in the barn and it exploded. It blew a 20 foot hole in that cement block house which was about 22 feet high, dead center. When that shell came in it sounded like 100 freight trains. It shook the hell out of us. It was a Big Bertha shell. I think it weighed about 1,700 pounds…it was like a bomb. Then the Captain tried to counter fire, but none of our artillery would fire that far because it was about 20 miles away. I made some calls and he patched me into the rear echelon to get some counterfire to shoot 20 miles. He would call the directions and I would call in. They finally got counterfire for the Big Bertha.

The Big Bertha was mounted on a railroad that came out of a tunnel. They’d shoot it and bring it back into the tunnel. When the counterfire came in, it was so loud that it sounded like 100 freight trains coming from the shell. They patched me into the rear echelon, they shot the 20 miles and we put the Big Bertha out of action. We knew it was out of action because they didn’t shoot at us anymore. It felt pretty good and the battle was pretty much over.

I was in several other battles. On the first day of battle in Luxembourg – it was Christmas day – we were going and there was small arms fire. It sounded like we were in three fire fights at once. I was walking towards an American tank and for some reason my arm was up in the air. A German fired a panzer – an anti-tank grenade – at the American tank but it fell short and exploded. A piece of Shrapnel hit me in my hand, in my finger, so I put my hand down. It was bleeding and it hurt. I hollered for a medic. I couldn’t find a medic so I said the hell with it and went into battle. It was 13 degrees below zero. One battle after another, my fingers swelled up to about twice its size. I was in the snow and eventually the cold snow and the temperature took it down so it was normal. That’s how I got my purple heart.

After the war, Brother Sabetay returned home and attended the University of Akron where he was a longtime and active member of the Theta Deuteron chapter of AEPi, After graduation, he started a small glass business. He recently published a book detailing his memories of his time in service to the country.

Brothers can read more about Brother Sabetay in his book, Memoirs of an American Jewish Soldier.