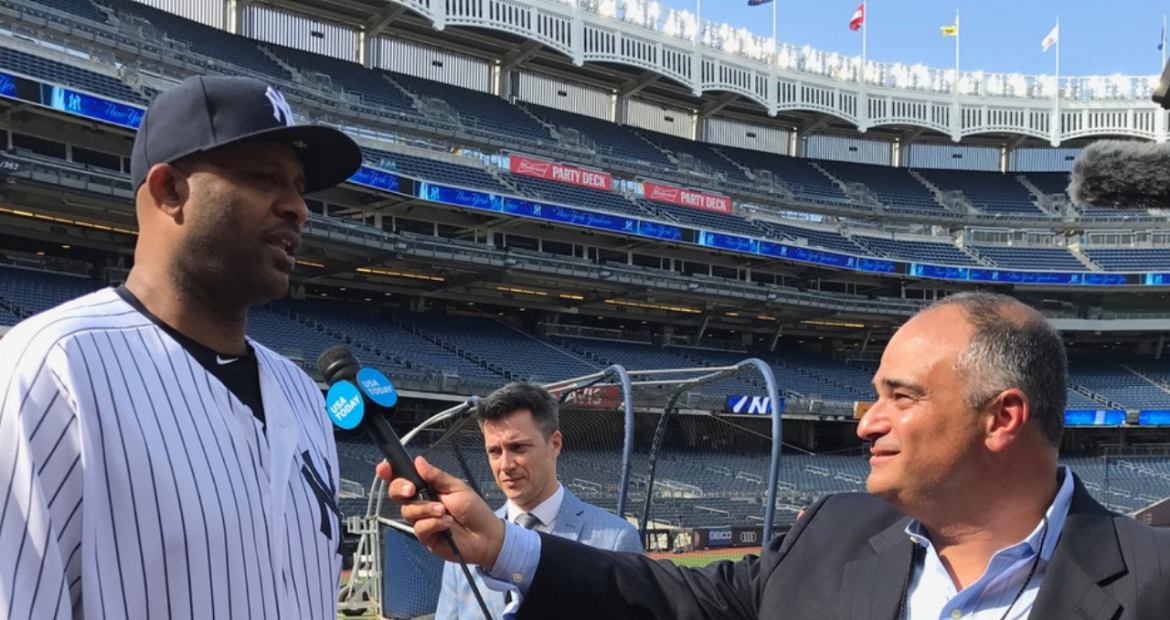 For those in the sports industry, the importance of possessing key professional relationships cannot be overstated.

Brother Larry Berger (Albany, 1992) has leveraged his impressive list of contacts, accumulated during a 30-year career which has included lengthy stints with NBA Entertainment, MSG Varsity, and USA TODAY Sports, to acquire access with the biggest names in sports history.

The list of icons he has sat down with is a veritable who’s who of the greatest athletes the world has ever seen.

From his earliest interviews, with Ernie Banks and Pee Wee Reese when Berger was a teenager, through his tenure with the NBA which saw him interview the likes of Wilt Chamberlain, Michael Jordan, and LeBron James – to his current role at USA TODAY Sports where he has spoken with, and created content featuring Wayne Gretzky, Dale Earnhardt Jr., and Adam Silver, the monumental list of thousands of interviews he has conducted would make any sports fan’s head spin.

Brother Berger’s love of sports started in kindergarten when he had a shopping bag full of hundreds of baseball cards.

“My mom would cover up virtually the entire card except for the background and I could name 95 percent of the cards,” said Berger.

And it wasn’t just the superstars of the day; his knowledge extended to the rank and file players of the late 1970s and 80s. To this day, he still recalls that Nate Colbert (Padres player from the early 1970s) enjoys (or enjoyed) playing checkers. That’s because that innocuous piece of minutiae was contained on the back of one of his cards.

In 1979, he began an annual pilgrimage to Cooperstown for the Baseball Hall of Fame induction ceremonies. “I would meet legendary players who played during the turn of the (20th) century; legends like Rube Marquard, Burleigh Grimes, Joe Sewell, and other superstars only the most ardent baseball fan would know. Those interactions spurred a deep interest in finding out who these men were and what exactly they accomplished. That curiosity sent me to the library where I did a significant amount of research.”

At the University of Albany, AEPi became a part of Berger’s life in the second semester of his sophomore year. Almost his entire dorm suite was in AEPi. “They were awesome people and really intelligent. Fast forward … and they are some of the most successful people you will ever find.”

Brother Berger’s passion for sports became evident to his Alpha Nu Brothers soon after he became a Brother.

“I’ll never forget that I just got into the fraternity and there was an intramural floor hockey playoff game. I scored a big goal for the team and soon after they realized I possessed a burning passion for playing, watching, and talking sports. That game allowed me to acclimate to fraternity life quickly.”

When he wasn’t playing intramural sports, he was talking about the pros.

During his sophomore year, he was named Sports Director of the college radio station, WCDB, and that’s when things got really interesting for the nineteen-year-old from Chestnut Ridge, New York, who always dreamt of forging a sports career.

“I took it upon myself to seek, and somehow acquire press credentials to cover the Baseball Hall of Fame inductions, Devils, Nets, and Islanders games, tennis tournaments, boxing matches, and minor league sports in the Capital District,” said Berger. “I applied for so many credentials, and surprisingly was extremely successful in that pursuit.”

“The most important aspect of my growth was the reps I was getting. One day I was calling an Albany basketball game, the next I was in an NBA locker room speaking with players from around the league. Another day I was interviewing Deion Sanders the day he joined the Albany-Colonie Yankees,” said Berger. “It was fun, I was improving, and my self-confidence was rising.”

When reminiscing about that period of his life and career, Berger told the story of sitting down with hockey legend Pat LaFontaine soon after a morning skate in the New York Islanders locker room.

“I prepared for days and had written out my questions, which were very long-winded. When I finally got him one-on-one, I recited about 20 questions, none of which pertained to topics of interest to other media members who were listening in for quotes for their stories,” said Berger.

“After what seemed like a half hour of questions and answers, we were interrupted by another media member who attempted to change the subject to that evening’s matchup,” said Berger.

“LaFontaine, politely told the journalist that at that point he was speaking with me, and when I was finished asking my questions about his career with the Verdun Juniors, he would answer other questions,” said Berger.

“This is a hall of fame hockey player in the prime of his career giving me that respect. That interaction really boosted my confidence and allowed me to feel that I belonged there.”

Decades later, Berger took LaFontaine out to lunch in New York and told him how much that experience positively affected his life and career.

April 5, 1993 was one of the greatest days of Brother Berger’s life. That was the day he was hired by NBA Entertainment.

“NBA Entertainment was a one-in-a-million place to work,” said Berger.

“The office was filled with the brightest minds in the sports video production industry, all of whom readily shared their knowledge and experience to anyone who asked. It was led by a titan of the field, Don Sperling,” said Berger.

“Don really set the tone there. We had a hard-working group, and some wonderful people; all with unique personalities. In that regard it reminded me of AEPi,” said Berger.

In 1996, Brother Berger was walking down the hallway at work and was asked if he would like to go to Chicago the next day and interview Michael Jordan. Of course, he said yes.

That experience was just one of many memories which have stuck with Brother Berger for over a quarter century.

“It was just amazing to see my name on the credits of one of Michael Jordan’s home videos, the kind you used to rent at Blockbuster,” said Berger. “I grew up with those home videos!”

“I traveled the country, learned how to treat people and be treated,” said Berger.

“I also got a chance to connect with so many of the greatest athletes in league history; and not only the marquee names, but also forgotten sports heroes of yesteryear, like Wat Misaka (who broke a color barrier in pro basketball), Kenny Sailors (who is often credited with inventing the jump shot), and so many others,” said Berger.

“To sit down with the greatest names in NBA history was a dream come true and I never took it for granted,” said Berger.

While working there, Berger witnessed, “a seven-footer hitting 3s with regularity and possessing the ball handling skills of a point guard” who immediately caught his attention. That player is now a perennial NBA All-Star, Karl-Anthony Towns of the Minnesota Timberwolves.”

Berger produced roughly 50 pieces on the St. Joes Metuchen star, who also sported a 4.0+ GPA. The crown jewel was a 90-minute documentary film, shot during his junior season.

“I had unlimited access with him because I got to know him and his family well,” said Berger. “I documented post-game dinners at their dining room table, was in the locker room during pre and post-game speeches, watched him read books to kindergartners with special needs, witnessed the big man carefully maneuver himself to fit into his school desk, and got a great feel for who he was and how he was being raised by his loving parents. That was an experience I will never forget.”

Currently, Brother Berger is Senior Producer of USA Today Sports’ video department. In his diverse role he continues to conduct interviews, but also acquires them for others within his company. He also writes articles, and coordinates a vast amount of content with hundreds of leaders within USA TODAY, the Gannett Network, and their Sports Media Group.

If there are any Brothers who would like to speak with him, Brother Berger would love to connect via LinkedIn.

“I am so proud of being in this fraternity,” said Berger. “I would love to hear from anyone seeking my insight or those who just want to chat.”

If there are any Brothers who would like to speak with him, Brother Berger would love to connect via LinkedIn. https://www.linkedin.com/in/larrybergerprofile/