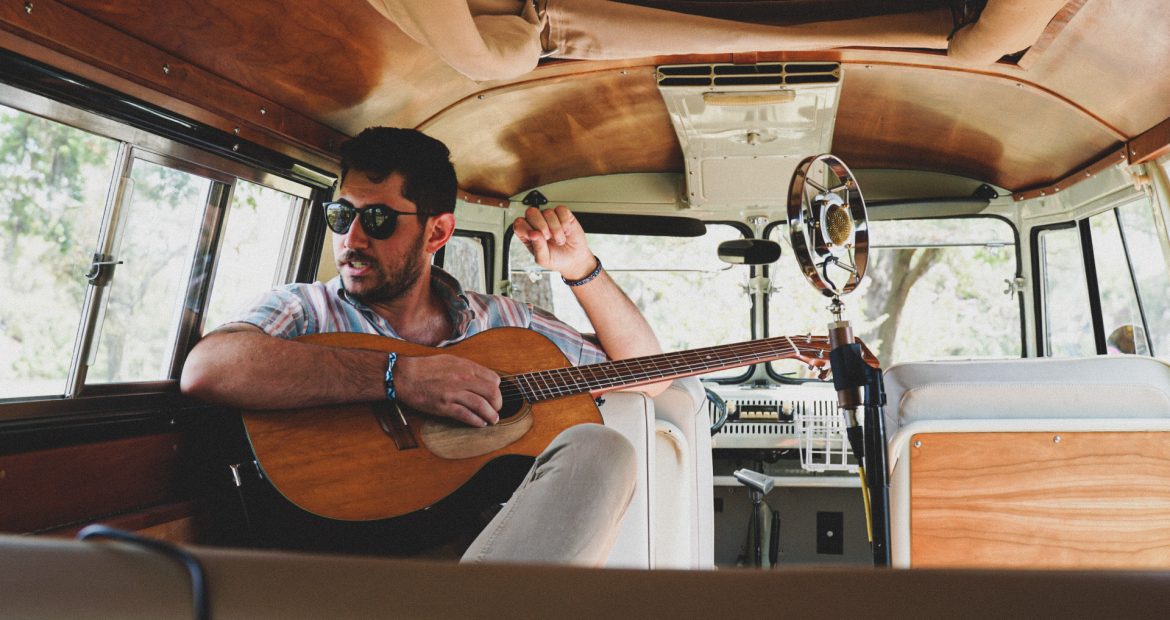 Oscar Wilde once said, “Life imitates art far more than art imitates Life.” This is key to what makes good song lyrics. Brother Samuel Herb (Florida Atlantic, 2015) left himself no other option than to pursue his dreams in country music. Throughout his art in music and lyrics, he has found success making country music in Nashville.

Growing up Reform in Jacksonville Florida, Brother Herb had a Bar-Mitzvah and was confirmed. He celebrated all the major Jewish holidays like Passover, Rosh Hashanah, and Yom Kippur. “I was really big into NFTY (formerly known as the North American Federation for Temple Youth) and it was the only place that I could feel like myself. I wanted to go to a school that had a big Jewish community and that was FAU (Florida Atlantic University).”

Brother Herb started singing at a young age — just for fun — but didn’t actually start writing songs seriously until he was around 16 years old. “I used to bring them (his songs) to a friend of mine. I was like, ‘I don’t know how to play instruments, my mind doesn’t know anything about melody. Would you be interested in helping me make these songs?’ He helped me out and eventually taught me how to play the ukulele.” Brother Herb went on to learn the guitar at 17 years old.

At FAU, Brother Herb majored in Multimedia and Journalism. Originally wanting to become a sports broadcaster, he realized that he really enjoyed writing. Journalism taught him how to network as well as ask the right questions and to put himself in the right positions. He also learned these skills during his time in AEPi.

One day, Brother Herb got a message from someone from his hometown. The Brother explained that AEPi was a Jewish fraternity and said that a bunch of their mutual friends were Jewish. He invited Brother Herb to a barbeque at the freshman dorms. “I was like, I’m not joining a f raternity. My dad was in a fraternity, that whole thing doesn’t really appeal to me. I’ve never heard of a Jewish fraternity, and I wanted Jewish friends.” Not a drinker or a partier, Brother Herb showed up and AEPi was not what he was expecting a fraternity to be. Eventually it grew into friendships which grew into Brotherhood.

Even though he only spent two and half years at FAU before transferring, Brother Herb was active in the chapter. Throughout his time in AEPi, Brother Herb held something like 18 different  minor board positions. “I was about being part of the team.”

After his junior year he transferred to the University of North Florida, feeling like he had failed. “I wasn’t depressed but I was sad that I wasn’t doing what I wanted to be doing.” He did his last semesters online. Watching the Academy of Country Music Awards, the song of the year award came on. The song, I Drive Your Truck by Lee Bryce won but it was written by three people who were not Lee Bryce. That night, he learned that you can make an entire living by just being a songwriter. “From that day forward I spent almost every waking moment trying to figure out how I could get to Nashville. How I could be the nice jewish kid who writes country songs behind the scenes that nobody knows.”

After some research Brother Herb found that there was a Nashville Songwriters Association which hosted a week of workshops. “I sold my college laptop to come to Nashville.” While there, everybody was telling him that he was on the  right track, that he was  really good and that he was too advanced for the program. “That’s really good to know that I’m on the right track. Thanks for telling me I’m too good for something that I sold my college laptop to come to.”

While in Nashville, Brother Herb got an email from one of the few songwriting magazines, American Songwriter, a biweekly magazine. They have a lyric contest that gets 4,000 submissions to their lyric contest. Brother Herb ended up finishing second. “I realized, wow I could actually do this. I’m actually decent at this.” Brother Herb quickly realized that Nashville was home.

Inspiration comes in waves for Brother Herb. “It’s all around you, you just need to look for it.” He likes to flip a concept on its head, like instead of saying a “needle in a haystack”, he flipped it to “a hay in a needle stack”. “There are two things that go into good lyrics. The truth and not letting the truth get in the way of a good song. It’s having every part of you being as real as you can be but taking yourself out of it so that someone else can put themselves in that song as well.”

Brother Herb loves collaboration. He collaborates with AEPi Brothers Dan Segall (Wake Forest, 2015) and Camden Weisz (Arizona, 2016). “The three of us, Sam, Dan, and Cam, we just kinda walk around town as the three AEPi Brothers. There are a few of us (Brothers) in Nashville, but the three of us hang out all the time.”

Currently, Brother Herb has a couple of projects in the works. He is creating his first album, and making sure it gets into the right hands for it to be successful. He also has a kickstarter that launched on February 18 and is working on getting back on the road. “I’ve got a run in Texas in April. I’m staying at one of my AEPi Brother’s houses in Dallas.”

Brother Herb’s music has taken off, getting on the iTunes Top 10 Singer/Songwriter chart for the songs Dirty and Someone Else’s Dream. “The music taking off is more about hard work and determination.” On top of all of that, for every 1,000 streams on any platform, and every piece of merchandise sold (CD’s, T-shirts, etc.), he will plant a tree with an organization called One Tree Planted.

“I’ve made myself no other choice but to fulfill and live the dream that I want. That is the only reason for any of my success.”