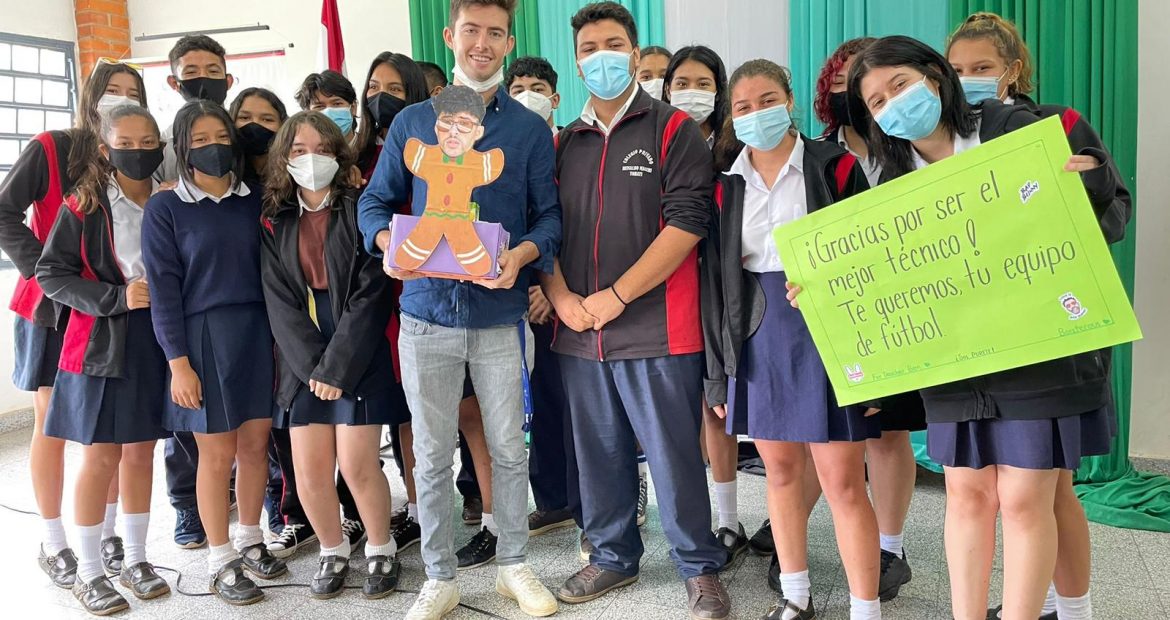 Changing the world requires risks. Making the world a better place can also force you to go out of your comfort zone. Brother Ben Goldstein (Michigan, 2021) has taken this lesson the extra mile – actually 4,800 miles – to Tobati, Paraguay.

Brother Goldstein grew up in Los Angeles. His father is from southern California and his mother is from Israel. Growing up, he went to Sunday school, celebrated Jewish holidays, and had his bar mitzvah with his family in Israel.

Entering college at the University of Michigan, Brother Goldstein had a close group of friends from high school. “I was honestly kind of skeptical that I would have the same type of friends in college but I was lucky to leave college with some lifelong friends, who are a lot more like family.” He joined AEPi in the fall semester of his freshman year. His favorite AEPi memory was having a big graduation celebration with his new member class. Brother Goldstein majored in Business. “I only graduated in May (2021), so my major hasn’t necessarily helped me yet, but the University of Michigan had a ton of resources helping me to find a job.”

As the pandemic was continuing, Brother Goldstein soon understood that you never know what is going to happen. “I realized that after college would be the perfect opportunity to fulfill my dream of traveling and making an actual impact on people’s lives.” Brother Goldstein had a family friend who had taught in a school in Tobati 10 years earlier. His friend originally planned to be there for three months but ended up being there for three years. Brother Goldstein heard all about his great experience and decided to go on his own, without a program.

Tobati has a rich culture despite the poverty. “The culture here is the warmest that I’ve ever experienced and I’ve been lucky to travel to different countries on different continents.” People make friends in everyday interactions just by sitting and drinking Tereré (similar to Yerba Maté). “I bought and currently ride around on a motorcycle here. The guy who I bought it from later invited me to dinner at his house. That type of thing is super common. It’s been easy to make friends with people around town.” Unfortunately, the typical job is brick making with an average salary of $80 a week. The insufficient, four hour a day, public education system leaves many impoverished. That’s where ICRM comes in.

Just four months into his time there, Brother Goldstein teaches English, helps with the admission process, teaches English and is the PE teacher at El Instituto Cultural Reinaldo Macchi (ICRM). The school was founded by two doctors – a married couple from Paraguay who had successful careers in the United States. Now retired, and in her 80s, the wife donated money for the school in 2004. ICRM is for the smartest and most driven children in the town of Tobati. Only 15 out of 80 applicants are admitted. “I actually just finished doing the final round of interviews for next year’s seventh grade class. The final round is where you go to the kids’ houses and check out their socioeconomic status.”

Brother Goldstein has seen the impact on the students. “The majority of my students are driven to go the extra mile, whether it’s doing stuff outside of class or really making an effort to learn English. I think that has been one of the most impactful parts of my experience.” The students have ambitions and goals of going to college in the United States, wanting to become surgeons, fight child labor, and help their country of Paraguay. “The students feel that they have been given this amazing opportunity to break the cycle of poverty that their families have been in.”

Brother Goldstein has learned lessons about taking risks and getting out of his comfort zone.  “This is the biggest risk that I’ve taken. I moved to a country where I don’t know a single person. I didn’t know the language, I didn’t know what I was getting myself into. It ended up being the best experience of my life so far and is certainly something that will shape the rest of my life.”

“The highlight of AEPi for me was making friends and gaining new relationships. Here (in Tobati) it is certainly that the quality of your relationships is the number one factor in happiness in general.”

If any Brothers would like to get involved with Team Tobati and support ICRM, they can reach out to Brother Goldstein directly through Whatsapp at 310-488-5916 or by email at [email protected]