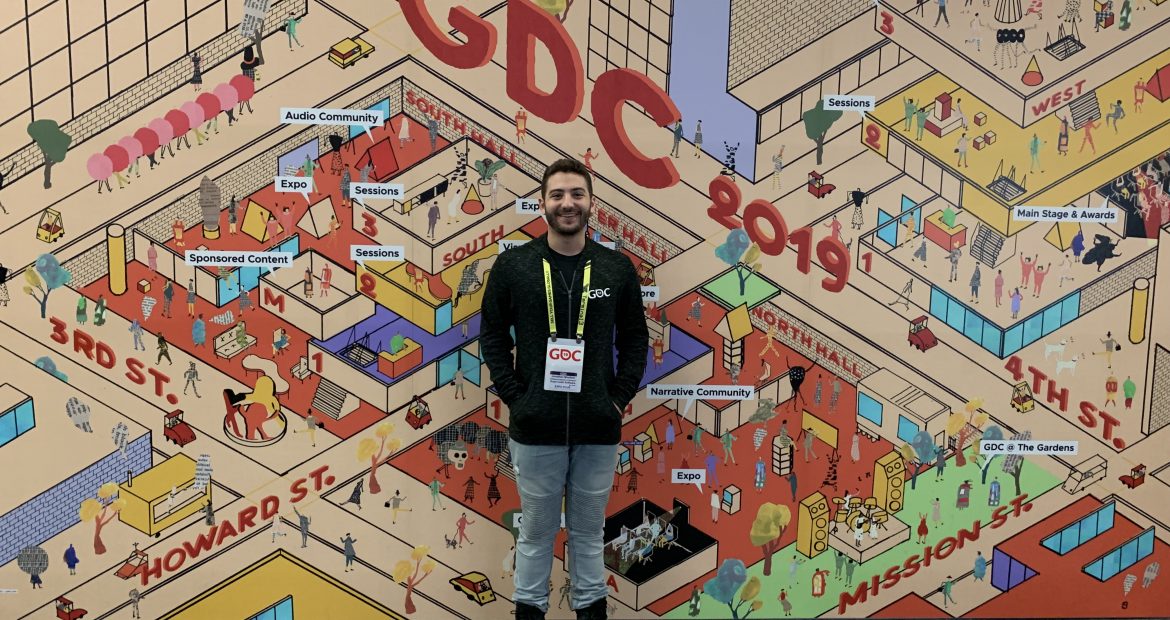 Making a video game is like making a board game, except there is no limit to what you can do. You don’t even need to work for a big company or even have funding. Brother Jonathan Moallem (Sydney Metro, 2019) works on video games in his spare time, publishing a game that ranked among Kotaku’s Top 10 Australian Games of 2021. He enjoys the ability to provide people with experiences that they didn’t think was even possible in video games.

Growing up in Sydney, Brother Moallem didn’t play a lot of video games. “My parents had very similar opinions as many parents in the early 2000s that video games are a waste of time, video games are violent and so on.” His family lit candles Friday nights for shabbat. He was only vaguely aware of his Judaism, until he was sent to a Jewish Day School in Sydney.

“It was quite a shock for me. I remember being incredibly anxious for the first six months that I was there. I felt like I had none of this Jewish learning. Everyone was so far advanced. How am I going to catch up? How am I going to communicate with any of my classmates if I don’t understand the first thing about being Jewish besides wearing a kippah and lighting candles on Fridays? But, I adjusted and actually made quite a few friends there. Going into University landed me in a situation where I had a bunch of Jewish friends.”

At University, Brother Moallem started off majoring in Information Technology (I.T.) because in Australia the education system works a little differently; “our final exams are a bunch of tests that directly correlate to a score and that score is a boundary mark. If you get above the score then you get into a certain type of degree.” Brother Moallem didn’t do as well as he needed to in order to enter the games development degree. “[In high school] my computing teacher had pushed me to work on a major project … he saw that I really liked the idea of working on games, but I didn’t believe that I could really program.” Fortunately, he found that the I.T. degree was functionally the same degree as the games development degree.

In his first year of university, someone called him and asked him if he would like to get coffee on campus. “He (then Director of Chapter Services Grant Bigman) wanted to start an AEPi chapter in Australia. I thought it was a ridiculous prospect at the time because we don’t have any Greek system in Australia.” A little while later, Brother Moallem found out that a bunch of his other friends had been contacted by Grant. As a group they decided to try it out. They started out with 15 to 17 guys and expanded to 40 Brothers. ”Our first chapter President, Benjamin Ezzes, had prior experience in managing these kinds of organizations. He was instrumental in running the chapter in a way it should run.”

At first, Brother Moallem didn’t want to take on a leadership position. Later on the chapter convinced him to help with the chapter’s graphic design and social media. From there he became the Sentinel and also oversaw all of the chapter’s website. He was asked to become Lieutenant Master for half a year while the Brother who he ran with on the ticket was overseas. Brother Moallem’s favorite memories from AEPi were going on bushwalks and taking road trips down the coast with the brothers of his chapter.

Brother Moallem then studied abroad at George Mason University and engaged with the chapter, observing how they were the center of Jewish life on campus. While overseas he was nominated and elected as Master of the Sydney Metro chapter. “It’s a difficult job feeling responsible for everyone. It weighs on you, especially when you have other stuff going on. I had a tendency to put fulfilling the role above everything else.”

Brother Moallem’s day job is working for Animal Logic, an animation company similar to Pixar or Dreamworks. “In my spare time I put together an artists collective for people who work around interactive media, video games, and generative art. All these people came together from various university contexts and post-university meetups around Sydney.”  Working on random game ideas, they eventually came up with one they named Fantasy Town Regional Manager (FTRM). “The idea was that we all had a background in fantasy RPGs (role-playing games), like dungeons and dragons. We wanted to think about what these worlds are actually like.”

Over the 18 months Brother Moallem and his team were developing FTRM. Written as a satire, they thought about it from the perspective of a townsperson in the game. What kind of stories could they tell within the game’s design? “When you’re making a game, I found it helpful to tackle it from the perspective of what is something interesting that I want to explore and learn more about? What is a concept I want to take further?” Using elements of randomness in the game mechanics, they showed how terrifying it might be for a person in the virtual world.

Brother Moallem was completely shocked when FTRM was listed as 10th in Kotaku’s Top 10 Australian Games of 2021. The game placed among other Australian games that have proper funding and people with full-time jobs. “We thought it was a typing error or a placeholder. We found out later that we knew at least one person who reviewed the game from Kotaku, so someone had definitely played it.” Brother Moallem enjoys watching people play FTRM on Twitch Streams and on YouTube. It blows his mind that sometimes people play it for tens of hours.

Just as there is no limit on what you can do in a game, there is no limit to who can be a game developer. “Even if they get to the publishing stage [many devs] don’t see themselves as proper game developers, because they feel like there is a bar that they haven’t quite met. The moment that you work on a game, whether it’s a two pixel game in your browser or a massive 3D open-world, you’re a game developer. You’ve made a game. That should be enough for you to feel the pride in being one. It’s definitely something that should always feel rewarding.”