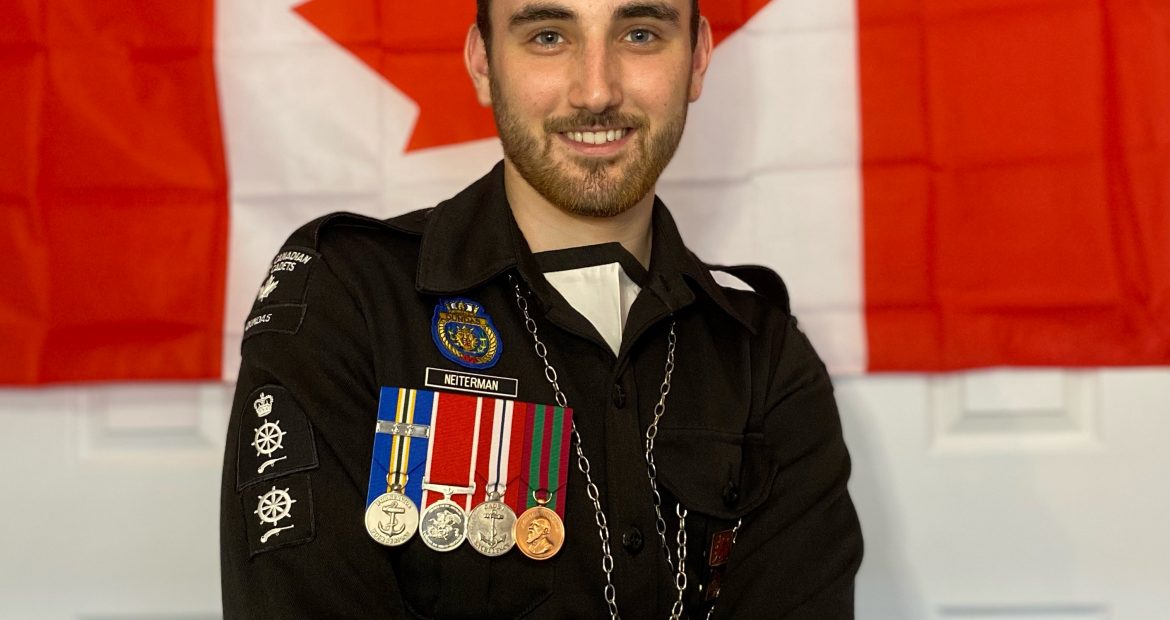 Most kids at the age of 12, start learning how to play ball, spend their free time playing with friends and time in school figuring out how fractions work. For Brother Daniel Neitherman (Guelph, 2024), not only was he doing all of this, but he was also becoming a part of the Dundas Sea Cadets.

In the summer of 2015, 12-year-old, Brother Neitherman went to the Royal Military Training College in Kingston, Ontario, where members of the Canadian Armed Forces train, to complete his first summer training course as part of the Dundas Sea Cadets. Having enjoyed his summer, Brother Neitherman continued with the Cadet program, which is a youth branch of the Canadian Military for children aged 12 to 19. The program is sponsored by the Department of National Defense of Canada and aims to instill three core values into its Cadets: citizenship and leadership, physical fitness, and an interest in the Canadian Armed Forces.

Completing two more summer training sessions in 2016 and 2017, Brother Neitherman would spend come to spend hours learning hands on skills, make his way up the ranks through his years in the program and have many accomplishments

The first accomplishment Brother Neitherman had during his time as a Cadet took place during the summer of 2018. Brother Neitherman traveled to British Columbia to do his senior trade course in Seamanship. During this course he became a certified Cadet Bo’suns and learned how to run a ship.

At this point, Brother Neitherman had been a Sea Cadet for three years and little did he know he was going to experience a once in a lifetime opportunity. The Sea Cadets program runs an international deployment opportunity which their Cadets can try to be selected for to fill one of the 12 participant spots. Brother Neitherman was one of the twelve Canadian Cadets selected, and out of those twelve he was one of three Cadets picked from Ontario.

Brother Neitherman found himself being deployed to the U.K and France to join 12 U.K. Cadets to sail through the English Channel for a few weeks. After sailing for the allotted time, the Cadets on the deployment got to tour France and London and for Brother Neitherman it was a “really cool experience.”

The next two summers Brother Neitherman would go on to become a part of the staff at HMCS (Her Majesty’s Canadian Ship) in Kingston. First as the Senior DPO (Divisional Petty Officer) and then as the project and event planner. “In the summer of 2019, I did my first year of staff. I was promoted to be the senior DPO of my division. I was in charge of a division of Cadets, as well as two other staff Cadets who were my other DPO’s. I was basically like a counselor to them, taking them from point A to point B, looking after them, and teaching them along with running everything for that division.”

While Brother Neitherman’s first summer on staff went smoothly, COVID-19 came and made his second a little disorganized. Moving the summer HMCS session to be completely virtual, the number of Cadets in attendance was astronomical. He became responsible for running one of three virtual Cadet training centers and the training of thousands of Cadets at a time.

“Because I was a Cadet in charge, my duty was to directly manage 350 staff Cadets. Throughout the summer had approximately 5,000 Cadets attend the training centers and at any given time, there was about 2,000 Cadets in attendance that I was in charge of.”

The hustle and work that Brother Neitherman put into his time as a staff Cadet, earned him the Order of Saint George medal – which is awarded to the top staff Cadet at the Cadet training center. He received this award for is “exceptional leadership and impeccable standard while leading three this the normal members of Cadets at a CTC.”

Finally, returning to his home base at Dundas, Brother Neitherman continued to finish out his time as a Sea Cadet while starting college at Guelph University. Studying for a Bachelor of Commerce in accounting and thinking of minoring in marketing or business data analytics, Brother Neitherman didn’t know Guelph University is where he would end up. He always thought he would end up going to a college like the University of Toronto or the University of Waterloo. Guelph came into the picture when he was awarded the President’s Scholarship – one of their 12 most prestigious scholarships.

At Guelph, Brother Neitherman didn’t let the fact that he was finishing up being a Sea Cadet hinder his academics and extracurricular life. He is starting his co-op program next term at KPMG, and he is a part of AEPi.

While he may not have known was AEPi was when he first came to college, he his glad his friend, fellow President’s Scholarship awardee, Jared Fishbach told him about the fraternity. Once he joined AEPi, Brother Neitherman received an abundance of support on the tail end of his Sea Cadet journey, and he is excited to become more involved and take on bigger responsibilities with his Brothers.

“I think all of the guys here at AEPi Guelph are really good guys. We get along really well, and everyone is super nice and always supportive of each other and there for each other.”

Now in “retirement,” Brother Neitherman doesn’t have plans to join the Canadian military right now, but instead is looking to finish his time at Guelph University and travel to the States for further education. While it is a bittersweet time for Brother Neitherman that he aged out of the program, he is very grateful for the opportunity that he had and the things he learned as a Dundas Sea Cadet.

“It’s hard to describe everything I learned in the program because I think it was one of the most transformative experiences of my life. A large portion of my life was spent it and for me it is about respect. Particularly learning how to communicate with other people how to be confident, how to work as part of a team and value other’s perspective and other people’s opinions and work with more of a diverse team. There’s a long list of things I would say was my takeaway, but there was so much time I spent in it and it all kind of comes together and I think it just made me an overall better person.”