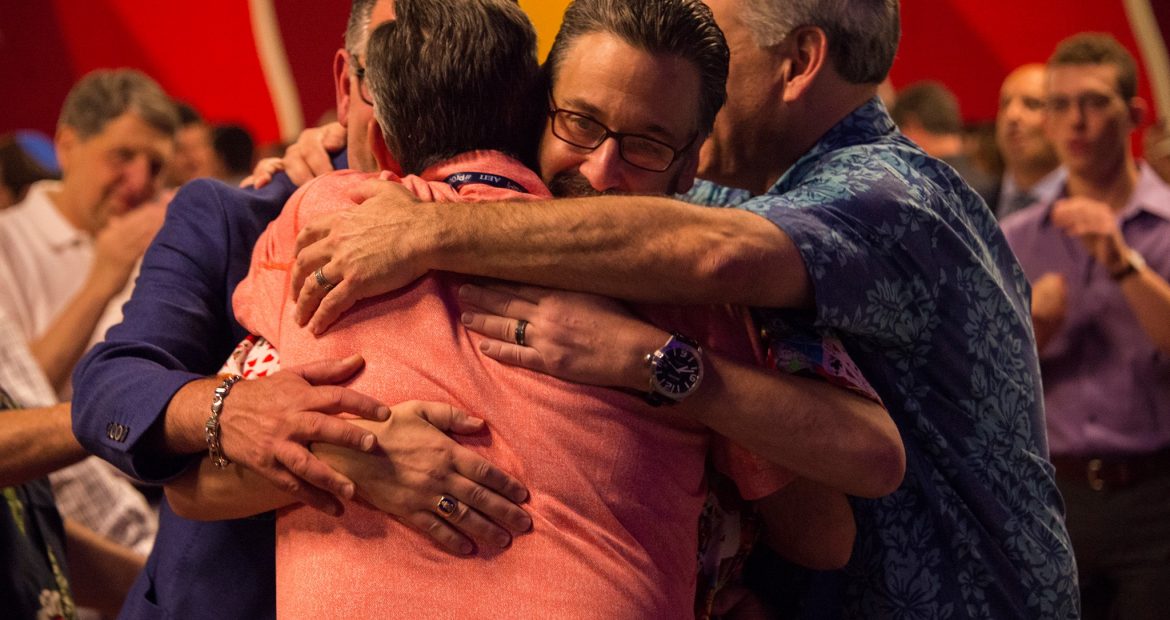 We want to encourage all of our undergraduate and alumni Brothers to  register for our first in-person International Convention in two years.

What is International Convention?

AEPi’s International convention is an opportunity for you and your Brothers to meet Brothers from around the globe and learn from each other and the AEPi International team how to build better chapters. Most importantly, though, AEPi’s convention is an opportunity to meet new Brothers – many of who will become lifelong friends – and to celebrate all of the great things that AEPi is doing.

Quite simply, #AEPi109 promises to be a once in a lifetime event as we come together – in person – for the first time since the outset of the global pandemic. Don’t miss this opportunity to be with your Brothers, learn together, make new friends and to revel in our Shared fraternal experiences.

Since so many of our Brothers haven’t had a chance to participate in an International Convention, we thought we’d use this space this year to include some recollections from some of our “more seasoned” Brothers in our alumni volunteer network about their first or favorite convention memories.

“AEPi convention is where you can go and know nobody yet the common bond of being a Brother has you going out and having fun with Brothers who become instant and lifelong friends.” — Past Supreme Master Larry Leider (York, 1991)

“My first convention was in 1972, live from Memphis. We drove down in my pledge brother Glen Roter’s yellow Opal, almost running out of gas on the way.  Conventions were small compared to today, but spirited. The convention chairman, an undergrad from Memphis State, was (now PSM) Sam Blustein. We became lifelong friends and true brothers, almost 50 years ago!  Sam found 110 Jewish women to fix up with all the undergrads at the convention for a party on a boat. Needless to say, we were amazed.” — Past Supreme Master Mark Schiff (Illinois, 1974)

When I first joined Alpha Epsilon Pi, I joined the group of men on my campus that called themselves AEPi. I did know that they were known as the “Jewish House” on campus, but I did not know, or care, anything about the “national” fraternity … other than it would cost me extra fees to join.

We needed someone to represent out Chapter at the national Convention. My best friend and I, without giving it much thought, said we would go. The Chapter even voted to give us the princely sum of $100 ($50 each) to offset our expenses.

As the Convention approached, we had second thoughts. We had already lost most of our Summer vacation to another mandate and we could think of at least twenty other reasons not to go. Sure, our Chapter had some issues, but we already had the best and the brightest men on campus in our Chapter so we were sure we could handle our own issues.

On the other hand, we had already accepted the chapter’s $100.00 and, more importantly, we had foolishly told them we would go. So off we went on the very long and uncomfortable bus ride to Atlanta.

When we finally got there, we were both very surprised at what we found. Most, if not all, of the Brothers we met (men we had not rushed, selected or agreed to) were men that would be welcomed and valued in our own chapter.

When we got into the Leadership School we were also pleasantly surprised to learn some of the creative ideas that we heard from many of the other chapters … and even colonies. Ideas that I recall as to how to motivate our members to desired actions and thus avoid the need to punish unacceptable actions.

Finally, the social life at our Convention was truly outstanding and added to our understanding of “Southern Hospitality.”

That was my first Alpha Epsilon PI Convention. I am now approaching my 50th and I am still learning …” — Past Supreme Master A. Edward Scherer (W.P.I., 1963)

“I’d say for me, the best experience I always have at convention is the ability to catch up with so many friends I don’t get to see regularly. The late night chats, the great networking and advice by fellow Brothers, meeting new talented Brothers has always made convention invaluable. Being able to connect once again with Brothers from across the world is a special privilege-cannot wait for convention next year.” — Avi Gordon (Binghamton, 2010)

“My first AEPi Convention was 1991 at the Fairmont in Chicago, where Richard Stein was installed as Supreme Master. Convention was where I met Brothers from around the country who have been some of my closest, dearest friends for 30 years – Micheal Weinhaus, Gerry Garcia, and Elan Carr. I distinctly remember playing snaps with Elan and other Brothers in the hotel lobby until 3:00 a.m. It’s not hyperbolic to say that some of my most treasured AEPi memories are from my time at Convention.” –– Past Supreme Master Jeff Jacobson (Northern Arizona, 1992)

“My first convention was in Scottsdale, AZ where I met Joel Miller floating in the lazy river. He’s become one of my best friends. We’ve worked together, vacationed together, he even signed my Ketubah. Convention is the most unique and wonderful event. A true can’t-miss for any AEPi.” — Supreme Sentinel Adam Cohen (Georgia, 2006)

Do you have any good convention stories to share? Send them to [email protected] and we’ll feature them in an upcoming article!