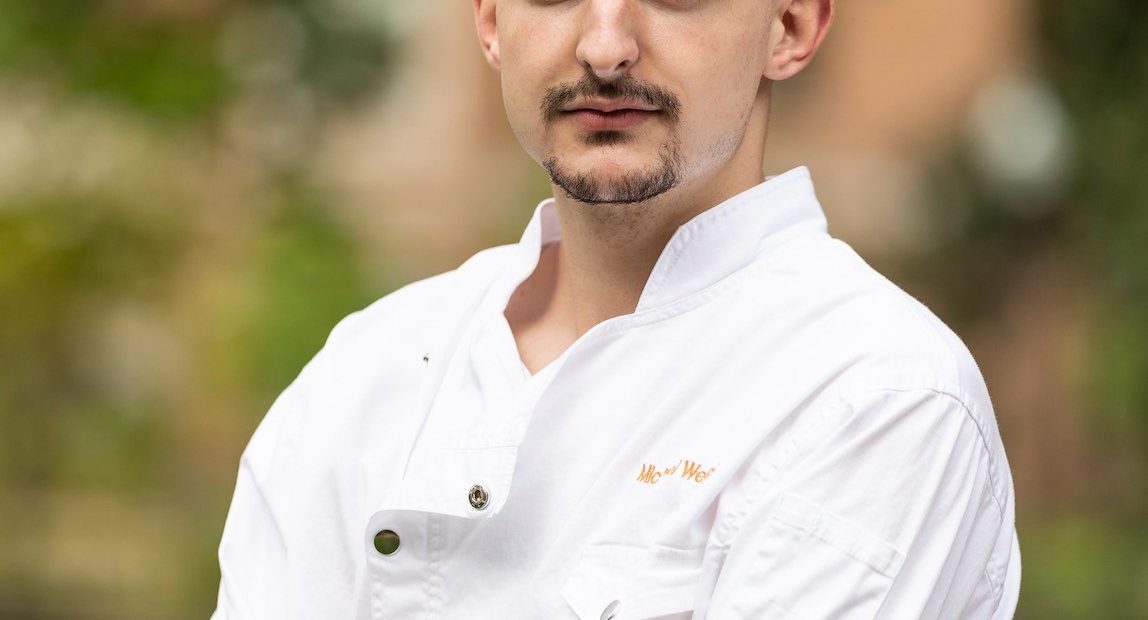 While the pandemic brought many to a standstill, Brother Michael Weirich (Vanderbilt, 2023) was busy combining his love of cooking with the knowledge from his college classes in Chemical Engineering. This endeavor led to him opening a pop-up restaurant, based out of his parents’ home in Cincinnati, Restaurant Confluence.

Restaurant Confluence started the summer after his freshman year when his internship was canceled due to COVID-19. While sitting at his parent’s house bored with nothing to do, his mom jokingly suggested that he start a restaurant since he has always loved cooking for people. It came as no surprise when he took that idea and turned it into a reality.

“With the lockdown, a lot of people were uncomfortable going places where there were a lot of people so why not create a more of a private dining space where you can still celebrate your birthday or graduation or anniversary, but you’re not with 100 other people, 20 other waiters, things like that, and make it a really special and private dining experience.”

Rolling up his sleeves, Brother Weirich got right to work and created a nine-course tasting menu for diners to enjoy. In its first summer of operation, Restaurant Confluence hosted six nights of dinners with 10 people attending each. After seeing its success, Brother Weirich reopened the restaurant the following winter break where he did three more dinners, as well as take out style meals, and this past summer the restaurant expanded to do another five dinners with 14 people in attendance at each.

Now, Restaurant Confluence is open anytime Brother Weirich is back home in Cincinnati. Patrons can book a time slot to eat a nine-course tasting menu that draws from Brother Weirich’s 12 years of cooking experience – from cooking dinner for his family since the sixth grade to living in Singapore in tenth grade – to craft the perfect menu. Each night the menu at Restaurant Confluence includes a pasta dish made from scratch, some type of meat dish and homemade desserts and baked goods.

But the uniqueness of restaurant doesn’t stop there. One thing that sets Brother Weirich’s restaurant apart from other dining experiences is that he uses elements of molecular gastronomy in his cooking. Learning the science behind the food has helped him combine different textures and flavor combinations together and helps him to run his kitchen more efficiently.

“It [molecular gastronomy] helped me to understand the process going on when I’m baking or cooking and if something goes wrong, instead of guessing or even going off of just instinct, I can actually figure out what needs to change based on what should be happening.”

The success of Restaurant Confluence caught the attention of not only local newspapers but the producers of Guy Fieri’s TV show Guy’s Grocery Games. Reaching out to Brother Weirich through his Instagram page, he went through a round of interviews and was eventually picked to be a contestant on the show and his episode aired on Sept. 1.

“It was a cool experience being on tv because I’ve never been on anything like that before.” When asked if there were any takeaways he got from the show Brother Weirich responded, “It was really cool to meet a bunch of chefs my age because the episode I was on was with three other chefs between 19 and 20 years old.”

While Brother Weirich didn’t win the competition, he had been watching Guy Fieri for several years and was able to cross off being on a cooking show from his bucket list. He also gained three new friends in the process.

“We all kind of keep in contact still and I’ve helped a few of them with some things and they’ve given me advice – because we all run our own pop-up restaurants or things along those lines. So just having that connection is really special because it’s hard to meet people this age who are also really serious about it and have the same experiences as myself.”

Now, Brother Weirich is back on Vanderbilt’s campus for his junior year where he is focusing on completing his studies. For his next endeavor, he wants to get into the consulting or engineering business for a few years and eventually open his own business while keeping his restaurant open on the side.

“Even though I’m passionate and love to do it, I think if I had to do it as my job, I think it’s just a path that would lead to me losing my love for it over time. So, I’m hoping to do it when I retire or something, but for now – side business.”

But don’t worry Brother Weirich isn’t giving up on his passion just yet. He has brought his love of cooking to both campus and AEPi. He has started a culinary club on campus and Brother Weirich is making sure that he gets his fellow AEPi brothers together for meals outside of the Fraternity, helps set up dinners and he even picked out some new kitchen equipment for the AEPi house at Vanderbilt.

“I’m the brotherhood chair (for the newly formed Tau colony) so mainly I just focus on making sure we have a good culture and positive connections between everyone and make sure everyone is hanging out outside of our chapter events. I’d say my experience so far has been really positive. I’ve really tried to incorporate my love of cooking and different things to the organization. We’ve had a few dinners where I’ve just helped by setting up everything.”

You can see more about Brother Weirich’s pop-up restaurant at: https://confluence.restaurant/