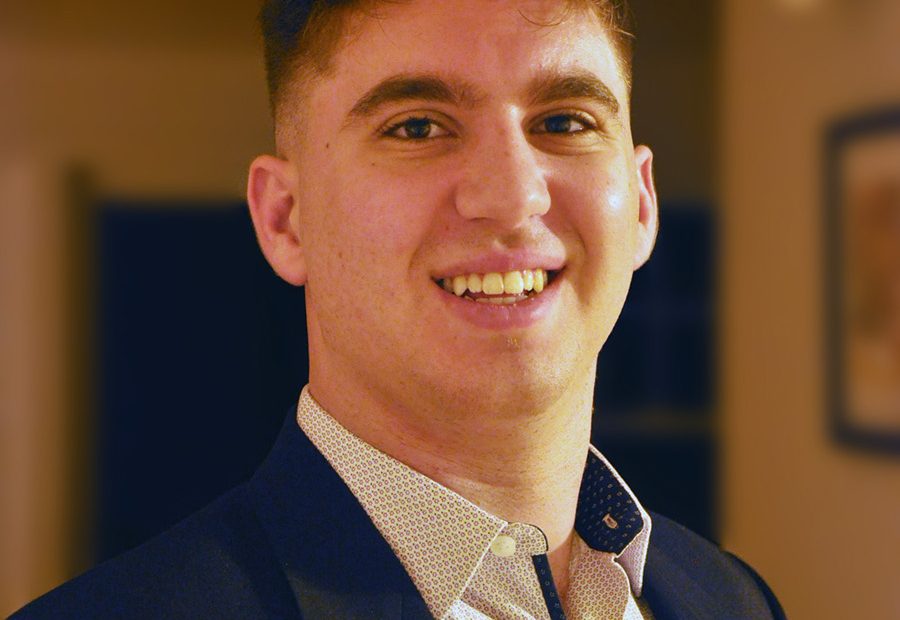 Adam Levine (Massachusetts, 2022) is a native of Framingham, MA who was recently honored for being one of the world’s most successful college fundraisers for Movember. That alone would make his story interesting but Adam’s personal struggles with mental health make his story extraordinary. We share his story this week in honor of National Mental Health Awareness Month.

Alpha Epsilon Pi International has partnered with JED to strengthen its commitment to the well-being of all members. The mental health and safety of all Alpha Epsilon Pi members, alumni, or undergraduates, should at all times be a priority of our organization. If you feel that you need to talk to someone now, text “START” to 741-741 or call 1-800-273-TALK (8255).

I first became aware of my depression in high school. By the time I got to college, those same challenges almost killed me. My story is similar to thousands of others who are battling mental health issues. But, I’m writing my story now and I want to help as many people as I can along the way.

I remember exactly where I was when my depression manifested itself. Throughout High School I had been a wrestler and class president for three years. In that, I had been involved with helping to plan our Junior prom. That was really stressful, and I was running around and doing all kinds of things and when we sat down for dinner, no one had left a place for me. All of the sudden, I felt it. I started to wonder if I even had any friends and felt like things were getting out of my control. About a week later I was diagnosed with mild depression and anxiety.

I started on medication and started to do better. The next summer – before my Senior year – I worked at a summer camp and it was great. As my Senior year started. Things began going down hill for me. I started to have more symptoms and attacks and spent some time in and out of facilities, trying to get better but basically unable to.

Even as recently as last fall, I was in a facility. It’s not uncommon for me. I know that if I have to be there, they can help and keep me safe.

I got accepted to UMass and that was my top choice. I wanted to big campus and diversity and I wanted to stay in Massachusetts. This was the best place for me. I had a second cousin who was an AEPi here and, even though he had already graduated, he came back to campus early in my freshman year and made me go meet the AEPi guys. He left at the end of the weekend and I just kept hanging out with the guys. I joined AEPi and have had a fantastic time ever since.

Even though I was happy, things were still hard for me and I was struggling. The combination of everything in my life – my choices, my environment, my circumstance, my mental health – all of those things impact the person I am and how I handle and respond to things.

During my freshman year, our chapter started a Movember team and I got into the idea of raising money for the cause of men’s physical and mental health. I was one of the top – if not the top – fundraiser on my team. I had raised about $500.

Movember is about more than just men’s physical health. They also focus on men’s mental health issues and that, obviously, is something that is very important to me.

Last September – on September 29 at 12:30 in the morning – I attempted to end my life by overdosing on some pills. I was living in Amherst (MA) with some of my Brothers. As soon as I took the pills, I regretted it right away. I told my roommates, and they called my parents who came and got me.

Later that semester, I ran for philanthropy chair of the chapter and didn’t win but I began working with the newly elected philanthropy chair to start our Movember efforts. I just got really involved. I started a Facebook fundraiser and used that as a platform to tell my story. I posted a picture of me in the hospital in September and things took off. Maybe people connected with my efforts because of my struggle, my story. That first night, I got my first $100 donation to my Movember page.

At the end of last fall, I was going to move back home because spring semester was going to be virtual again. The thought of it made me uneasy and anxious. After talking it over with my doctors and my parents, we all agreed that being in Amherst with my fraternity Brothers and friends might be better for me. Being surrounded with these people would be healthier for me. I moved into one of our main AEPi houses and it’s been amazing.

This November, I want to work to expand AEPi’s efforts across the world and raise more money for Movember through this amazing Brotherhood.

I do a lot of writing now to help me express my emotions and I recently changed my major to English because I realized that’s something I’m passionate about. Being open about my story has helped me more than anybody can realize. Since I’m open about my struggles, others have opened up to me about their struggles and just talking about it has helped them. And, seeing that I am helping someone else has helped me.

My fraternity Brothers have been behind me at every step. They were instrumental in helping me raise all of this money and they have helped me grow as a person.

This isn’t just about the money I’m raising. If I can have a positive impact on just one person every day, then I am successful in my goal. AEPi has been the best time of my life. My Brothers have supported me so much. I hope that, by sharing my story, I’m able to help AEPi Brothers around the world.

Look for my Movember page this fall!