Welcome to the Madness. Mensch Madness, that is. 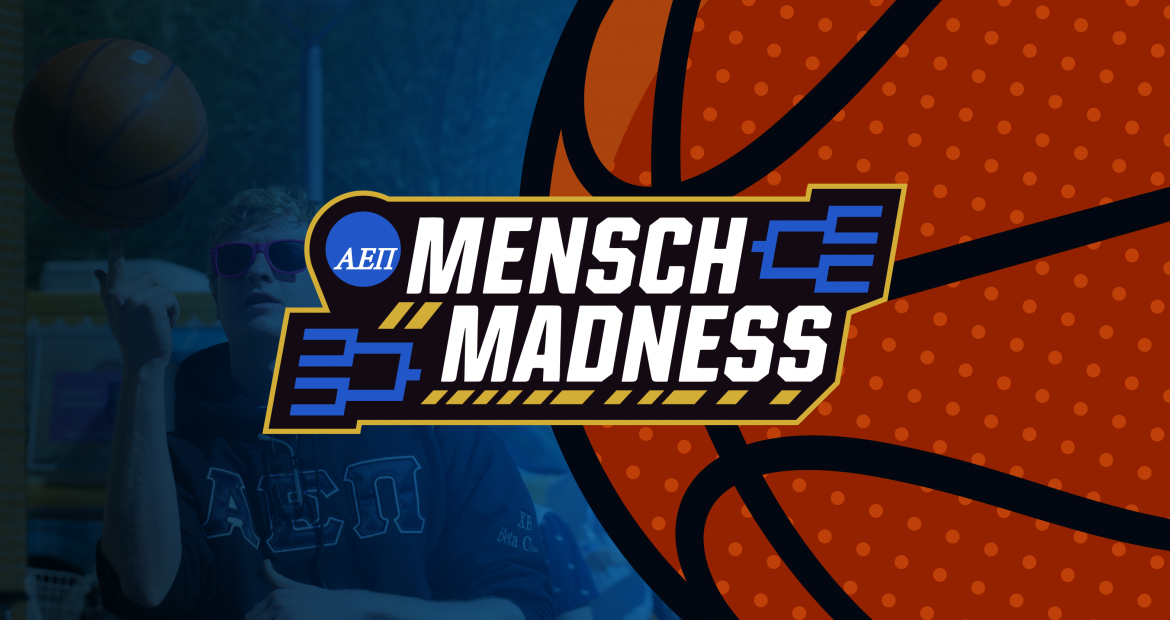 It seems fitting that, after a year of a global pandemic, we are starting things off again with a competition involving a word that imbues mania, but March Madness is exactly that. This year, like normal, sixty-eight teams will vie to be the NCAA Division I men’s basketball champion. However, there’s a small twist. For the first time ever, the NCAA will host the entire tournament in one geographic location: Indianapolis, Indiana. It’s also important to note that, obviously, no tournament has ever been played during a global pandemic, so the stakes will be higher than normal and team matchups could, theoretically, change on a dime. This will make for a competition unlike anything we’ve seen before. So, why not join the madness and participate in Mensch Madness, AEPi’s Jewish philanthropic twist?

What is Mensch Madness?

Basketball has played an integral role in our history since the fraternity’s founding days. Our founder, Charles C. Moskowitz, was known as a “fine basketball player, and was sought after for his athletic skills” at New York University. When he was sought after by a fraternity on campus for his skills on the court, but his Jewish friends were not, the idea of Alpha Epsilon Pi was born. In that spirit, we started Mensch Madness in 2014 to honor him.

AEPi’s Official Bracket Challenge combines the excitement of the annual NCAA basketball tournament with the competitiveness of pitting Alpha Epsilon Pi’s chapters and colonies against one another, regardless of their size.

How do we compete?

Jumping in and participating is as easy as purchasing a bracket at menschmadness.aepi.org! Simply go to the website, fill out the information asked, and click ‘Submit.’ You can either choose to purchase one bracket for a minimum $10 donation, or two brackets for a minimum $18 donation. While no more than two brackets can be associated with each email address, there is no entry limit per person. So, register as many brackets as you want under different emails! It’s important to choose the school you wish to support in the checkout process, as that helps determine prize winners. (see below)

Now that Selection Sunday has passed, you can log in and start choosing your teams that will win the tournament. Not confident in your NCAA knowledge? No problem! Simply randomize your bracket and it’ll choose for you, or feel free to pick based on seeding, team colors, mascots, etc. the choice is entirely up to you.

All brackets must be submitted no later than 11:59 AM EDT on March 19, before the start of the first round of March Madness.

What’s in it for me?

No competition is complete without prizes, right? This year, we’re thrilled to offer the overall bracket winner a $500 Amazon gift card. As we mentioned earlier, AEPi chapters will also be competing against one another. The chapter with the most participants will receive the Charles C. Moskowitz trophy and rush shirts (up to $250)!

We’re also excited to partner with Hillel International for this year’s tournament and will award the campus Hillel with the most participants $250 for their Hillel. So, it’s important to make sure you choose the correct campus to support when registering your bracket!

Keep an eye on the campus leaderboard through Friday afternoon to see who is in the lead, and the bracket leaderboard after the tournament starts to see who our overall winner will be!

Who does the money go to?

As the international Jewish fraternity, Alpha Epsilon Pi holds the Jewish ideal of Tikkun Olam, or repairing the world, as an important value. It’s the cornerstone of our philanthropic giving. Proceeds from Mensch Madness support Alpha Epsilon Pi’s Repair the World Fund, which supports the global Jewish community through donations to organizations that provide assistance to those without adequate resources, support the fight against debilitating disease, provide worldwide disaster relief and much more! AEPi Brothers from chapters all over the world contribute to our Repair the World Fund as part of our Official Philanthropy Program (OPP).

The Repair the World Fund currently supports three beneficiaries. These organizations are the Jaffa Institute, United Hatzalah, and the Israel Cancer Research Fund.

Buy your bracket, spread the word and help AEPi in its mission to repair the world!