Brother Rabbi Lewis Kamrass (Georgia, 1981) has already created a legacy of leadership as the longtime Senior Rabbi at Cincinnati’s Wise Temple, one of the country’s oldest and most storied Reform congregations and in AEPi, with both of his sons having joined him as Brothers of AEPi. Now, he looks to extend that legacy of leadership when he becomes the president of the oldest and most influential Reform Rabbinic leadership organization, the Central Conference of American Rabbis (CCAR).

“When I got to college, I was pretty sure I was going to join a different fraternity. My (biological) brother was an AEPi and I didn’t think of myself as someone who would be in the same fraternity. But I joined AEPi and learned lessons that I’ve carried with me. The Brothers broadened my perspective, they made me aware of different outlooks and thinking. The chapter was much more multi-faceted than their reputation was at the time.”

After graduating in 1980, he began his rabbinical studies at Hebrew Union College. After returning from his first year in Jerusalem, he studied for four years in Cincinnati and was ordained in 1985.

“I didn’t expect to stay in Cincinnati. I took a job at this congregation (Wise) and then the senior rabbi left to return to his hometown three years later.” Brother Kamrass never left the Queen City. Wise Temple, one of the oldest Reform congregations in America, has long been a leader in the Reforme movement. Its historic Plum Street Temple was originally constructed in1866 and is a stop on any tour of downtown Cincinnati. The suburban Wise Center also provides a contemporary and inviting place for the community. 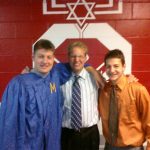 Brother Kamrass with his sons, Micah and Jared

“When my son, Micah (Ohio State, 2011), was being initiated (in 2008) the Brothers at the Eta chapter at Ohio State invited me to attend his initiation and surprise him. He walked into the room and there I was. Two years later, Micah was the chapter master, and we were both in attendance when my other son Jared (Ohio State, 2013) was initiated,” said Brother Kamrass.

While still keeping his full-time position as the senior rabbi at Wise, Brother Kamrass is now set to begin his term as president of CCAR. CCAR is the center for lifelong rabbinic learning, professional development, and resources for the 2,200 rabbis who serve more than 2 million Reform Jews throughout North America, Israel, and the world. CCAR offers rabbis opportunities for Torah study; professional development; spiritual growth and emotional well-being for themselves and their families; services such as placement, pension, mentoring, and transition training; and chevruta—a nurturing community among rabbis.

“I got involved in CCAR because I believe that when Rabbis are supported and strengthened – which can be uniquely done by peers – communities are strengthened. Over the last year, rabbis have done remarkable work – much of which we weren’t trained for. We learned on the job and our learning on the job is very public. I think Rabbis, whether working in Hillels or synagogues, have done heroic work, innovating, and experimenting.

At the same time, though, many rabbis are depleted. Some have been working from home with young children, some have had to learn how to do with a lot less resources. I think that there won’t be a clear reset – we’re not going to just go back to the way things were before the pandemic – and we’re all beginning to face it. Rabbis are energized by the creativity they’ve had to use but are depleted by the hours and effort. It’s clear that this is not a sprint, but a marathon and we have to support rabbis and help them pivot.”

While hoping to be able to travel in the future to meet his colleagues throughout the world, for now, Brother Kamrass has resigned himself to holding those meetings via zoom. But he recognizes the opportunity that virtual meetings can bring.

One of our chapter Brothers had a terrible illness, became blind and passed away two years ago. He was never married and had no family. I happened to be in Atlanta and went to see him in his last weeks. He told me that one of the only things he regrets in his whole life was that he had no family anymore and there was no one left to say kaddish for him.