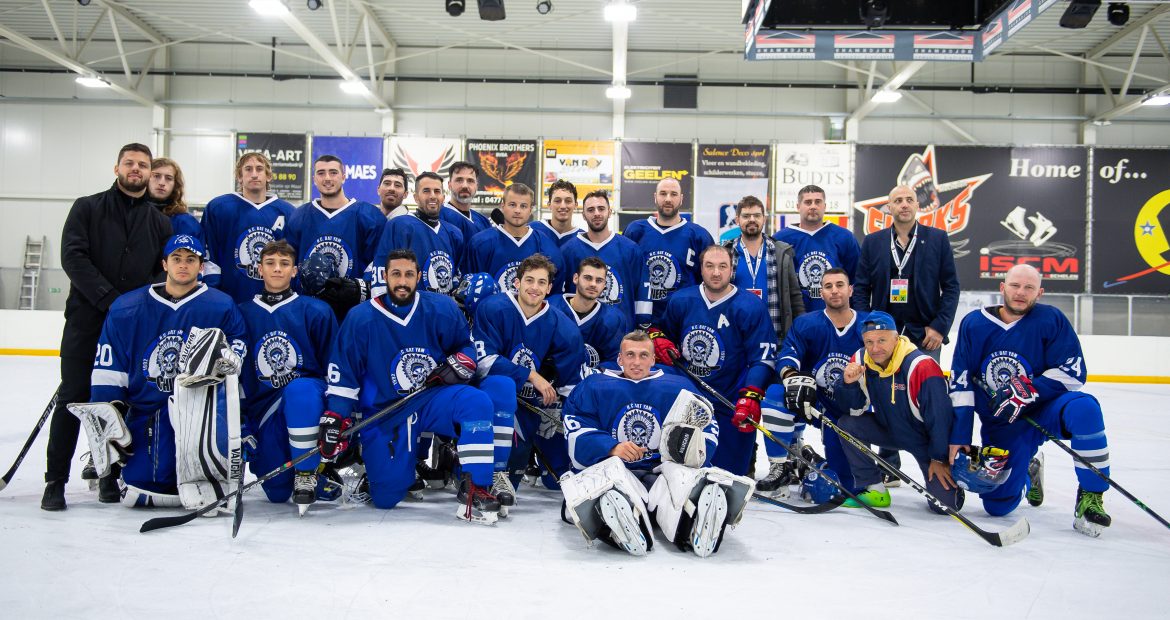 By the time you read this, the first team sport game ever between an Israeli and a United Arab Emirates (UAE) team will have been played in Dubai when the Israeli hockey club league champion plays the UAE club champion. The second game is scheduled to be played tomorrow evening (UAE time) and will be for, at least, informal bragging rights as to the best club hockey team in the two nations.

Here’s three amazing things about these games:
1. They’re being played in a country that didn’t even recognize Israel just a few months ago.
2. They’re being played early Friday morning and late Saturday night to be sensitive to the Shabbat observant Israeli players.
3. And, the Israeli team is being captained by a Brother of Alpha Epsilon Pi.

Brother Josh Greenberg (IDC, 2011) took the ice today representing his adopted home country of Israel, his family and his Brothers. As a Founding Father of AEPi’s Aleph chapter, he had scores of Brothers from around the world cheering him on.

A native of Los Angeles, Brother Greenberg was a hockey fanatic from an early age. “Ironically, my dad didn’t me to play travel hockey because it would have conflicted with Shabbat,” he said. “My father always had a dream to move to Israel, but I always thought I was going to stay in the (San Fernando) valley and attend UCLA. But then, I realized I could keep playing hockey in Israel.”

While studying at IDC, his life was changed with a simple inbox message. “I got an inbox message from Steven Kaplan (former AEPi International ELC) saying that he was thinking of starting an AEPi chapter in Israel. I always imagined myself in a fraternity. My friends in the States were joining AEPi so I knew what it was. I knew right away that that was what was missing for me and what was going to keep me in Israel. He (Brother Kaplan) sold me on the idea of starting the first chapter in Israel and I was all in.”

After graduation, Brother Greenberg began a serious pursuit of hockey. “I became a part of the Israeli national team in 2012 and played in the Group B world championships in Turkey in 2013 where we won the Gold Medal.” He’s remained a part of the national team and has competed in scores of international competitions.”

His club hockey team, HC Bat Yam, competes in the Israeli League, the first division of Israeli hockey, and is a perennial contender for the league championship, having won it three of the last four years. Over 15 seasons, Brother Greenberg has become the Israeli League’s all-time leader in goals, assists and points.

“When things opened up with UAE, I thought that this was the perfect opportunity to go play there. I knew there was a small hockey community there –they have two ice rinks just in Dubai and there’s only two ice rinks in the whole country of Israel. We reached out to the club in Dubai and the ball got rolling.”

HC Bat Yam traveled to Dubai on Wednesday after all of its roster passed COVID tests. This was especially difficult since some of Brother Greenberg’s teammates had to travel from North America and Europe to Israel first before going on to Dubai.

“I’m excited to be on the first Israeli team to play in UAE. Now, I want to be the first Israeli to score there. (editor’s note: we will update this story with results when they become available). I hope that this is the start of something between our two nations. I’d love to be able to play tournaments and host the team from Dubai in Jerusalem someday by putting ice over the basketball court. We could get 10,000 people there!”

“Since this all came up, I have gotten lots of messages from all of my Brothers, especially the founders of Aleph. From the moment I heard about AEPi, I’ve been all in. I’ve never let go of the chapter. I’m in debt to Steven Kaplan for sending me that message and, of course, to Brothers like Andy Borans and Elan Carr who helped us so much.”

“You know when someone wins the Stanley Cup and they’re asked how they feel after working so hard and finally achieving that? That’s how I feel about AEPi. There are no words. I feel such a sense of pride in helping to start it. I’m planning on going to Dubai, winning, and bringing that same pride to Israel and my fraternity.”