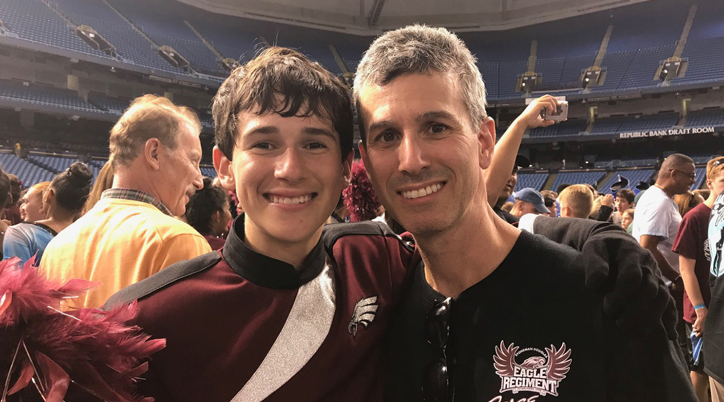 On February 14 of 2018, a gunman opened fire at Marjory Stoneman Douglas High School. In what ended up being the deadliest high school shooting in U.S. history, seventeen people lost their lives—including Alex Schachter (pictured above, left), the son of AEPi Brother Max Schachter (South Florida, 1993, pictured above, right).

Since Alex’s passing, Brother Schachter has founded Safe Schools for Alex, a non-profit with a mission to provide school safety practices to students, parents, school districts and law enforcement. Between lobbying congress and providing volunteer opportunities, Safe Schools for Alex is dedicated to ensuring all children can learn in a safe environment.

Fast forward to the fall of 2020, the Upsilon Kappa chapter at the University of Connecticut was getting ready to organize a fall philanthropy. When chapter master Trevor Smith (UCONN, 2021) and philanthropy chair Daniel Petrsoric (UCONN, 2022) heard about Brother Schachter’s story and Safe Schools for Alex, they immediately felt the fraternal connection.

“Not only was Max in AEPi down at South Florida, but Alex also loved UConn,” said Brother Smith. “His main goal for college was to go to UConn and play for the marching band. So, there were just so many connections. Max said he knew for a fact that Alex wanted to go to UConn and join AEPi at UConn.”

This deep-rooted connection prompted the Brothers to take action. They immediately reached out to Brother Schachter and discussed their idea to organize a No-Shave November philanthropy campaign, calling it No-Shave for Schachter, in Alex’s memory. “We got on a call with Max and his team and we were expecting them to send some logos and ideas,” said Brother Smith. “But rather than that, they were all on board. They’ve supported us in every way we could imagine, including a shirt company.” Brother Schachter and his team helped by supporting the chapter’s social media push, providing media resources, and helping them fundraise on Facebook.

“Max Schachter was so grateful that we reached out to him,” said Brother Petrsoric. “You could hear it in his voice. The first words out of his mouth were ‘thank you, guys.’ You could tell how much AEPi still meant to him; he even told us about an AEPi jersey that he still wears.”

When the chapter heard of the new philanthropy initiative, they were all immediately on-board and ready to help out. The chapter Brothers participated in No-Shave for Schachter by selling shirts, as well as growing out their facial hair as part of the original No-Shave November campaign.

While holding the chapter’s traditional philanthropy events during the COVID-19 pandemic is challenging and risky, the chapter leadership felt that a No-Shave November type of campaign was perfect because it didn’t have any in-person aspects. “The reason why we decided to do No-Shave November was because we’re in a pandemic right now,” said Brother Smith. “We didn’t need any in-person anything, it was all through social media. It worked out really, really well.” The chapter posted constant updates of their facial hair progress on social media while asking the community to make charitable contributions to Safe Schools for Alex.

Through social media and virtual outreach, they were able to raise more money than many of their previous philanthropy endeavors. Brothers Smith and Petrsoric have hopes to expand this philanthropy in future years and are excited about the possibility of involving other AEPi chapters, as well. They encourage any chapters interested in supporting this cause to reach out to Brother Schachter By collaborating with Safe Schools for Alex, the Brothers of the Upsilon Kappa Chapter have done their part to ensure a safer future for schools everywhere.

You can still support No-Shave for Schachter by purchasing a t-shirt.