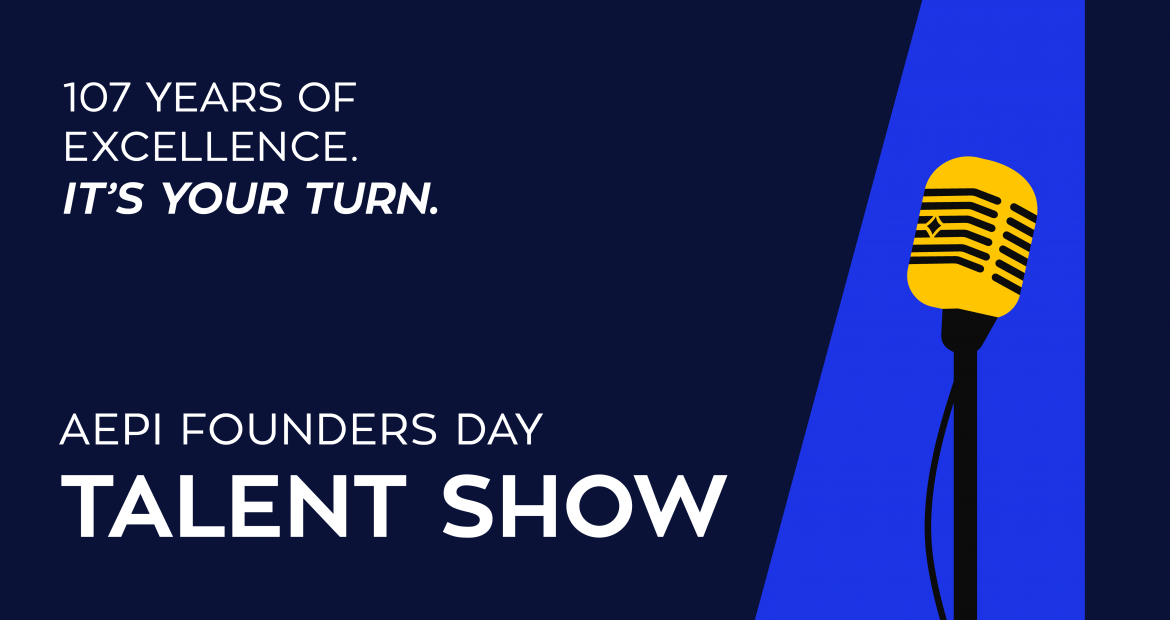 This weekend, four of AEPi’s most talented Brothers will face off in the final round of the Fraternity’s first-ever talent show. After competing against 32 other acts in the gold and blue divisional rounds over the last two Sundays, these four are excited to give it their all and see if they have what it takes to win the $1,000 cash prize and a meeting with the president of the William Morris Endeavor Talent Agency (WME), Brother Ari Greenburg (UC Berkeley, 1994).

The talent show’s final round will take place over Zoom on Sunday, November 8 at 2:00 PM EST. Just like the hit show, America’s Got Talent, part of these Brothers’ success depends on the audience’s input. Those interested in watching the performance and voting on their favorite act can purchase a ticket here. You must be present on Zoom at the time of the show in order to participate in the poll. Anyone can vote, so we encourage those supporting our Brothers to spread the word to family and friends.

Who are these Brothers, and what can you expect on Sunday? Read more about our finalists below before buying your ticket. Break a leg this weekend, Brothers!

Michael (pictured: left) and Brian (pictured: right) are two recent college graduates learning to navigate life in the ever-eclectic New York City. Strangely symbiotic, yet lonely and afraid, they put their passion into their music. Their group, Late Night Thoughts, has a soundtrack for every mood and song for every moment. With more than one million streams and around 50,000 monthly listeners on Spotify, Late Night Thoughts is on a strong upward trend and hope that this opportunity will propel them further down the road to success.

Dan Segall (stage name: Dan Harrison) is a country singer/songwriter based in Nashville, TN. His sonically innovative and lyrically fresh approach to country music has been catching ears all around town, and he has accomplished much in the short time he’s been in the Music City. From his first few releases garnering significant streaming and playlisting success, to sharing the stage with modern country heavyweights at legendary venues around town, Dan’s goals are as big as anyone’s and, from the beginning, AEPi has been an integral part of his success. He hopes to tell his unique story and modernize country music, bringing it to new heights, all the while being rooted in an emotional and anthemic sound that honors its influences and speaks truth and wisdom.

Short in stature but fierce in character, Rich Rotella proudly served as Brother-at-large on the executive board at Towson University. His chapter Brothers encouraged him to pursue his childhood dream and become a professional actor, saying he possessed the greatest combination of drive, talent and passion they had ever seen. Eleven years later, Rich has hit many highs and lows in the grinding Hollywood business, but still stands tall. Winning this competition and having the honor to meet Brother Greenberg at WME may catapult his acting career. He hopes that we will give him the opportunity of a lifetime so that he can continue to keep us laughing and crying for years to come.

Jared Lee Wiseman is a senior in the Iota Chi chapter and is majoring in comedy writing and performance with a minor in television writing. In the 2019 Great Long Island Laugh Off competition, he placed in the top 10% of comics. He hopes you all enjoy his video…Gold and Blue forever!